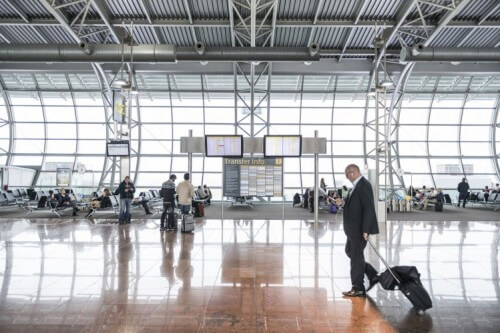 A month that was positively impacted by the Christmas holidays but was also marked by the more stringent sanitary measures in Europe.

In January, Brussels Airport welcomed 800,518 passengers, an increase of 183% compared to January 2021 (stringent travel restrictions) and a decrease of 52% compared to the same period before the crisis (January 2019).

Passenger numbers in January were positively impacted by the Christmas holidays, with numerous travellers returning from their holidays.

This resulted in a relatively large difference between departing (363,583 passengers) and arriving (436,935 passengers) passengers.

The share of departing transfer passengers was 19.5%, 1.5% lower than in 2019, due to the stronger recovery in originating traffic than in transfer traffic.

Passenger numbers were again put under pressure by the worsening epidemiological situation in Europe, the travel restrictions and the testing requirements.

The ban on flights to Morocco also had a negative impact on the whole month.

Fortunately, this ban was lifted as from the 7th of February.

The top 10 destination countries in January were respectively Spain, Germany, Italy, Portugal, Turkey, France, the US, Switzerland, the United Arab Emirates and the United Kingdom. Spain, Portugal and the US did particularly well compared to 2019.

Both Malaga and Tenerife recorded comparable passenger numbers in 2019.

In the coming months, Brussels Airport is preparing to welcome back four airlines that suspended their flights at the start of the Covid-19 pandemic: Delta Air Lines, Air Transat, CSA Czech Airlines and Ukraine International Airlines.