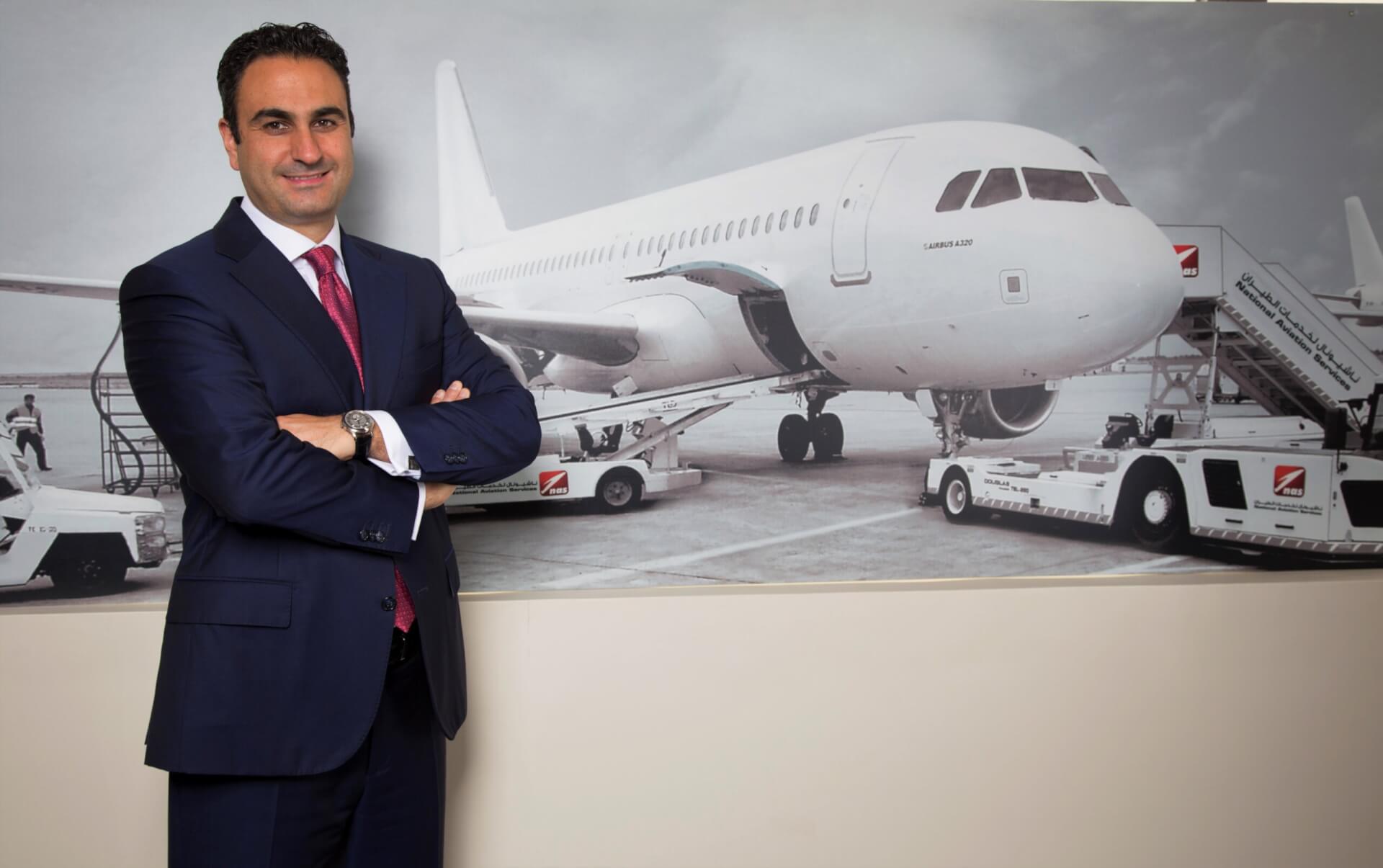 The merger of Menzies Aviation and National Aviation Services (NAS), when the deal is finalised later this year, will create a new powerful, global aviation services entity, reports Mark Pilling, in this exclusive interview with NAS chief executive Hassan El-Houry.

When Hassan El-Houry, the chief executive of National Aviation Services, said last year that his parent firm Agility Logistics, with its roots in Kuwait, was in a post-pandemic mood to buy other aviation service/ground handlers he was dead serious. And his sights were set high. So high in fact that Agility is now in the process of buying none other than established and global player Menzies Aviation.

After rebuffing Agility’s first offer in early February, the Menzies board has recommended that shareholders accept an improved offer at the end of March in a cash offer of £6.08 per share which values Menzies at £560 million ($730 million). It is expected that the transaction will be completed in the third quarter of 2022 “pending fulfilment of certain conditions and approval”.

In an interview with ARGS, El-Houry said: “It’s a winning transaction for all stakeholders.” The combination of NAS and Menzies will, according to briefing information from the pair, create “the world’s largest airport services company by number of countries they operate in, second largest by number of airports served, and the third largest by revenue (based on 2019 reported revenue)”.

When El-Houry and Agility began searching for an acquisition, the inevitable question for a new player is who are you exactly? In this regard, El-Houry simply noted: “Actions speak louder than words.” Agility, which is no minnow, has grown to become one of the world’s largest investors in the logistics and supply chain field, including being the second largest investor in global logistics player DSV. It has a market capitalisation of over $7 billion, 16,000 employees and is active in over 40 countries.

It was El-Houry’s task to turn around NAS in 2008 when he took the reins. Then the company was small and struggling to expand. “In a few years we turned it around, reaching 70-80% market share in Kuwait, growing in emerging markets like India, and then turning our attention to Africa. Even during Covid we continued to grow, launching operations in countries such as Guinea-Bissau, Zambia, and Iraq,” said El-Houry.

Despite its growth over the past decade, “very few people knew who NAS was, unless there were in South-east Asia, the Middle East or Africa”, said El-Houry. “These emerging markets are very challenging, and we were very successful. Given that success it was time for NAS to look globally, and we began to look at opportunities around the world.”

Agility’s attention fell on Menzies, which is publicly listed on the London Stock Exchange. “Both companies were emerging from a very challenging pandemic, but both maintained a growth DNA in our cultures,” said El-Houry. For its part, NAS had a strong parent, a dynamic and agile business culture and relationships and a strong footprint in emerging markets. Menzies, which was founded by a bookseller John Menzies as long ago as 1833 in Scotland, has a strong brand and a reputation for operational excellence that is “second to none”.

The combined entity will be known as Menzies Aviation. “We’re pragmatic,” explained El-Houry on the loss of the NAS name. “The Menzies brand is far stronger than ours,” he said.

A major attraction of the deal is the complementary geographic footprint of each business with minimal overlap. Menzies has a strong presence in the USA, Europe, and the Asia-Pacific, including Australasia, while NAS has grown from its original base in Kuwait to locations throughout the Middle East and across Africa. In terms of airport operations, Menzies is present at over 200 while NAS works at over 55 stations.

While the two firms provide services in Jordan and India, they do so at different airports, said El-Houry. Both operate at Baghdad International but provide different services. Only at six airports in South Africa do Menzies and NAS compete directly. El-Houry said there are talks with the authorities, customers, and other stakeholders there to work out how the proposed merger will affect operations. “The lack of overlap is one of the reasons why Menzies is a perfect fit for us. It makes the deal extremely deliverable,” he added.

The businesses describe themselves as having a strong presence in six continents. Together they will rank number one in countries served with 56. After that comes Swissport with 45, Dnata with 36, Signature with 24 and WFS with 20. In total, the two operate at over 250 airports, with 92 warehouses and depots, handling 1.74 tones of air cargo annually, and with 35,000 employees.

Part of the strategic rationale for the acquisition is that aviation services companies will need scale and resources in the coming years to succeed. Such scale is especially important against an industry backdrop that has seen airlines lose $200 billion in the 2020-2022 period and the industry as a whole rack up $110 billion in government support that needs to be repaid.

“The combined business will have the capital to invest in the talent, technology, innovation, infrastructure, equipment, and sustainability leadership required to accelerate growth,” according to the briefing document. “It has been a very difficult time for everyone. What we have is a parent that is financially strong. We think that strength will give us the momentum to grow around the world,” said El-Houry.

The NAS/Menzies combination will seek to grow in countries where they are not present or under-represented, said El-Houry. There will also be growth in business areas where either one has opportunities. For instance, NAS has a strong lounge network, which is not a strength of Menzies, while NAS has no refuelling operations, which is a core part of the Menzies offering.

Growth in cargo services, which is an area where both companies are active, will “undoubtedly be a key area of focus,” said El-Houry.

As part of a due diligence process around an acquisition, customers are asked what they think about a potential link-up. “Our airline customers have been overwhelmingly supportive and delighted to hear the news,” said El-Houry. “The financial capability we bring will enable us to better respond to customer requests, to invest in new equipment, technology, and infrastructure.”

“The combination will making a stronger company. Customers are looking for aviation services providers that are robust, that can withstand [industry] shocks, and handlers that can service them in more airports,” said El-Houry.

The plan for the management team of the combined business will see El-Houry remaining with the group as chairman of the board while Menzies chief executive Philipp Joeinig, its chief financial officer Alvaro Gomez-Reino, and chief operating officer Mervyn Walker, will remain in their C-suite positions. This will ensure leadership continuity.

A key component of the combined business structure will be comprehensive Environmental, Society and Governance framework ensuring a strong commitment to sustainability, diversity, and inclusion, as displayed by the individual businesses today, from day one, said El-Houry.

This is the plan. For now, until the anticipated completion of the transaction in the third quarter of 2022, it is business as usual.