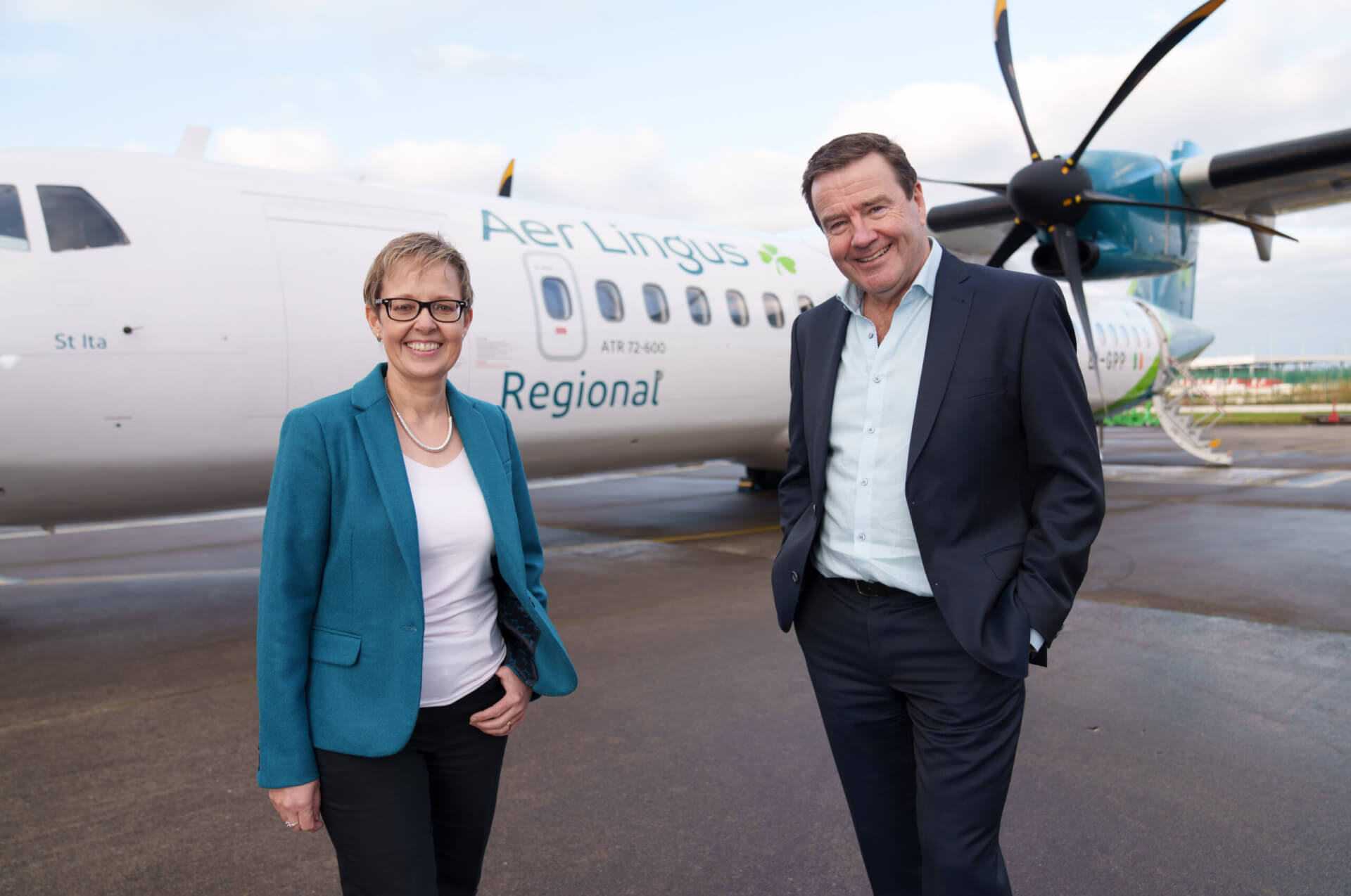 Aer Lingus and Emerald Airlines have announced details of the commencement of Aer Lingus Regional flights, with tickets on sale from today.

The flights operated under a franchise agreement by Emerald Airlines will commence on 17th March as Aer Lingus Regional.

Today’s announcement will result in Emerald Airlines flying over 340 flights per week across 11 routes with fares starting at £25.99, with further route announcements to be made in the coming weeks.

High-frequency routes, including Dublin-Edinburgh and Dublin-Glasgow, will be served up to 4 times daily.

The announcement sees the re-establishment of services to regional points across the U.K including Newquay Cornwall, Exeter, and Isle of Man. Emerald Airlines will be the only airline offering these services from Ireland.

Critically, the announcement adds over 60 UK – US routes on the Aer Lingus network connecting via Dublin including connections from UK regional airports to New York, Los Angeles, Boston and Seattle.

Aer Lingus recently announced an ambitious schedule for Summer 2022, which reflects the airline’s goal to build to pre-pandemic levels of flying and anticipates continued momentum in customer demand.

This commencement of the Aer Lingus Regional routes operated by Emerald Airlines will greatly increase connectivity between the UK, Ireland and the US, and accelerates Aer Lingus’s strategy to expand Dublin Airport as a hub airport.

Lynne Embleton, Aer Lingus CEO, said: “Today is about opportunities. Opportunities for our UK customers to connect with ease to Aer Lingus flights to North America and to take advantage of the US preclearance facility.

“Opportunities for customers across UK and Ireland as we develop the Aer Lingus regional network. And opportunities for the Irish economy and Irish aviation as we expand our hub at Dublin.

“It has been a pleasure to work with the team at Emerald Airlines to accelerate this partnership and start operations 10 months ahead of the original schedule.

“We are all looking forward to welcoming our customers on-board Aer Lingus Regional services, operated by Emerald Airlines.”

Conor McCarthy, Emerald Airlines CEO, said: “We’re delighted to be able to commence operations under our franchise agreement with Aer Lingus well ahead of plan in line with the recovering customer demand.

“The time is right for Emerald Airlines to begin operations under the Aer Lingus Regional brand, and we truly look forward to welcoming our customers onboard our flights as soon as February next.

“Our customer-focused schedules will offer choice, convenience and great value for both regional and transatlantic air travel.

This announcement is a great boost for connectivity from Ireland to the U.K, including cities such as Edinburgh, Glasgow, Newcastle, Bristol, Leeds and the Isle of Man.

Emerald Airlines will be offering a high-frequency schedule with convenient flight timings to facilitate both business and leisure passengers.

“Emerald has also established an airline company in Northern Ireland (Emerald Airlines UK Ltd) and has applied to the UK CAA for a UK AOC and Operating Licence.” McCarthy added.

“We are very confident that this will result in long-term connectivity being maintained across the Irish Sea and will boost business and leisure travel between Northern Ireland and Britain.

“We have already reached a long-term commercial agreement with George Best Belfast City Airport and look forward to connecting Belfast to many cities in the UK as soon as possible in 2022.

“Further details, routes and launch dates in relation to the Belfast operation will be announced in the New Year.”

Emerald Airlines is continuing with the expansion of its fleet of ATR72-600s.