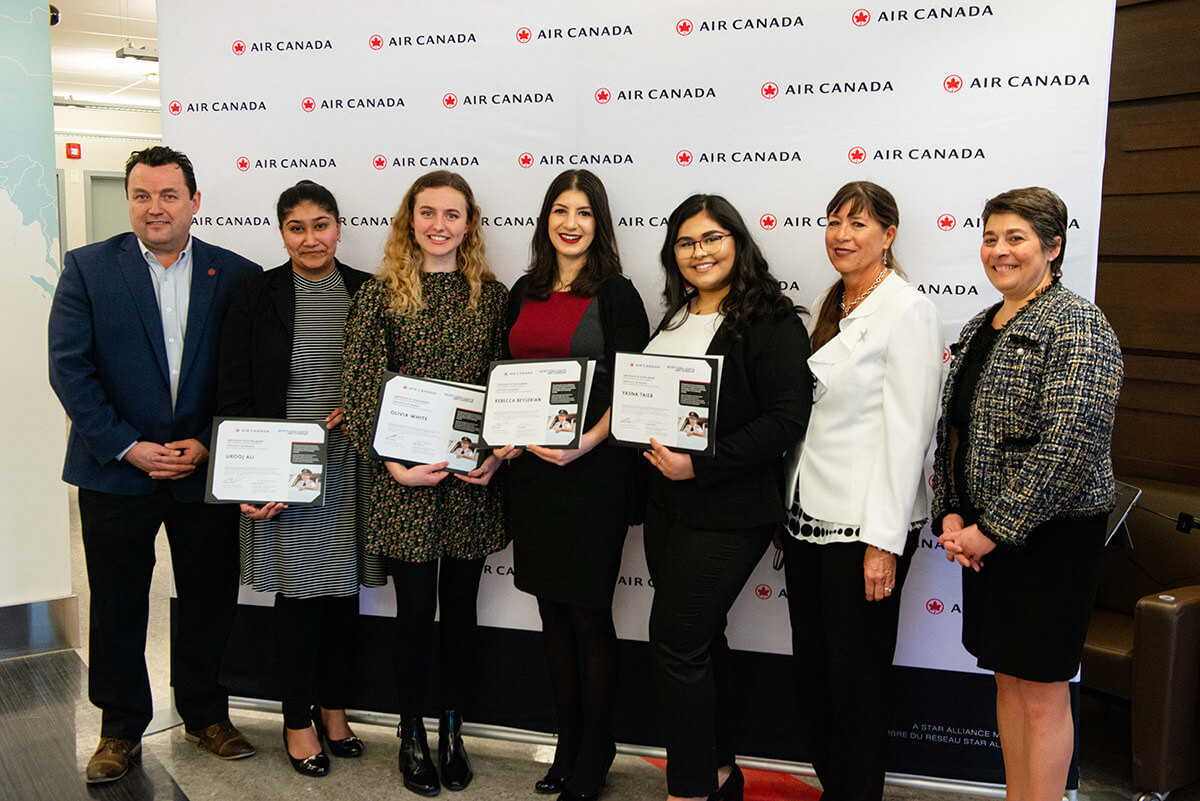 Air Canada marked Women of Aviation Worldwide Week leading up to International Women’s Day 2020 by celebrating the achievements of its women employees while also looking ahead to the next generation of women aviators as it announced four admirable winners of the inaugural Captain Judy Cameron Scholarship.

Additionally, for the fifth consecutive year, Air Canada featured a flight operated with all female pilots and cabin crews, and supported by female maintenance, dispatch, ramp, baggage, customer service and operations teams.  Flight AC167 from Toronto to Edmonton on March 5 also made history by being the first transcontinental flight to be guided by all-female Nav Canada Air Traffic Controllers from departure in Toronto to landing in Edmonton.

“We proudly salute and celebrate the achievements and contributions of the nearly 16,000 women who work at Air Canada around the world today.

“We actively advance diversity through several initiatives, and we are especially thrilled to champion the next generation of women in non-traditional aviation careers by announcing the winners of the Captain Judy Cameron Scholarship, named in honour of our trailblazing, accomplished first female pilot. Our message to young women is to follow your aviation dreams and know there are rewarding careers for all qualified people.“

“This scholarship will help other women overcome financial barriers to pursue their dreams, whether flying airplanes or fixing them. Thank you to Air Canada for making it possible for me to experience the most amazing career in the world and for encouraging other young women in their passion for aviation. I admire the determination that these four amazing young women have to pursue their flying. Their accomplishments to date are outstanding. One day, I expect to be a passenger on an Air Canada airplane and hear them make the announcement, ‘This is your Captain speaking‘,” Judy said.

The winners of the inaugural Captain Judy Cameron Scholarship, awarded in partnership with the Northern Lights Aero Foundation, each receive $5,000 toward their studies in aviation.  All four are also pursuing their commercial pilot’s licence. They are:

Urooj Ali – studying Geography and Aviation at the University of Waterloo, joined the Royal Canadian Air Cadet program at the age of 12, successfully completed the Glider Pilot Scholarship in Quebec at the age of 16 and became the highest-ranking and sole female cadet with a pilot’s licence.

Olivia White – completing a Bachelor’s degree in Aeronautics Leadership at the University of Windsor, volunteers with Air Canada Rouge for the Girls Take Flight event in Oshawa.

The Captain Judy Cameron Scholarship recognizes and celebrates the achievements of accomplished women studying in aviation and aerospace. Air Canada has committed to awarding $20,000 per year for three years. It is open to young women pursuing non-traditional aviation careers as commercial pilots or aircraft maintenance engineers who may not have the financial means to do so.