This article looks at the recovery of UK based airlines post Covid-19, the impact of the pandemic on travel demand and its effects on airline routes. You can read the full piece here.

“The Aviation sector was hit hard during the pandemic, with a cumulative loss of over USD 200 billion according to IATA (International Air Transport Association).

“As a result, airlines and airports have had to continually adapt to survive.

“IATA analysis estimates that by September 2021 there were 2.3 million fewer direct Aviation jobs globally than there had been in 2019, a 21% reduction compared to pre Covid-19 levels.

“In the UK, 51% of passenger transport jobs were classed as furloughed as of 31st July 2021, according to UK Government figures.

“Travel demand appears to have rebounded significantly faster than expected; but with 2.3 million fewer workers. +

“It is estimated that in the UK alone over 700 workers are set to strike over the British summer period, demanding pay increases and the reinstatement of pay cuts implemented during the pandemic.

“The UK government introduced a maximum capacity limit from 900 flights per day for July and August to 825 flights per day in July, then 850 in August. The capacity cap that was put in place in Heathrow airport stated that the maximum number of daily departing passengers that airlines, airports, and ground handlers can serve over the summer is restricted to 100,000…”. 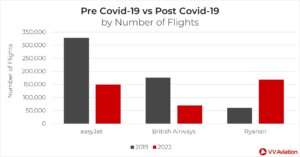