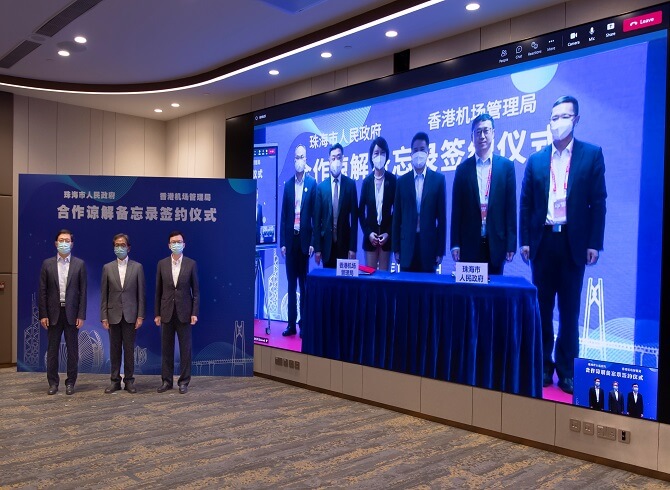 Airport Authority Hong Kong (AAHK) and Zhuhai Municipal Government today signed the “Zhuhai Municipal Government and AAHK Cooperation Memorandum of Understanding” (MoU) to strengthen the cooperation between Hong Kong International Airport (HKIA) and Zhuhai, with a view to propelling the development of aviation industry in the Greater Bay Area (GBA).

In Hong Kong, Jack So, Chairman of AAHK; Liu Chun-san, Under Secretary for Transport and Logistics; and Fred Lam, Chief Executive Officer of AAHK, witnessed the signing via simultaneous videoconferencing.

Under the MoU’s framework, the key collaboration projects include the launch of “Fly-Via-Zhuhai-HK” passenger link services, development of international cargo business, establishment of a high-end aviation industrial park in Zhuhai, and active discussion on equity injection into Zhuhai Airport.

Hong Kong and Zhuhai airports will leverage the strengths of their respective air networks and the Hong Kong-Zhuhai-Macao Bridge (HZMB) to expand customer base and further enhance competitiveness.

Jack So, Chairman of AAHK, said, “With strong support from the Central Government and Guangdong Provincial Government in capturing opportunities for integrated development between the Mainland and Hong Kong, the deepened cooperation between the two airports will give full play to the respective advantages of Hong Kong and Zhuhai, as well as leverage the convenience brought by HZMB, achieving mutual benefits.

“Both sides will join hands in developing a high-end aviation industrial park, bringing international partners to Zhuhai and creating an important new collaboration platform for Guangdong and Hong Kong to promote the development of the aviation industry.

“The collaboration will boost the demand for logistics and air cargo services, and provide service to the whole country and worldwide.”