Allegiant Travel Company today reported the following financial results for the second quarter 2020, as well as comparisons to the prior year: 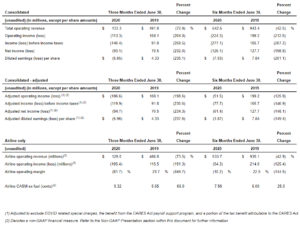 “The second quarter proved to be the most turbulent quarter in the history of the industry,” stated Maurice J. Gallagher, Jr., chairman and CEO of Allegiant Travel Company. “As the virus spread throughout the country in March and April, the industry saw an unprecedented plummet in demand, followed by significant capacity cuts, upwards of 80 to 90 percent. As cases subsided, demand began trickling back in, only to begin recessing again with the uptick in cases beginning late June. It appears demand will continue to ebb and flow along with fluctuations in reported cases for the foreseeable future. We have built a unique way to operate our company as compared to the rest of the industry, which will continue to sustain us throughout the duration of these uncertain times.

“We are experts when it comes to managing capacity to meet demand. Our model was built around flexing capacity up and down to meet differing seasonal demand levels. This quarter proved to be the ultimate test of the model, and I believe our second quarter results highlight its inherent strength. Throughout the quarter, we maintained a very broad network and selling presence, cutting capacity when it made sense, but also capturing demand when it returned. We completed the quarter with roughly 50 percent reductions in capacity, maintaining the broadest schedule of any domestic carrier. Load factors were just over 50 percent, a significant step in the right direction from April lows. During the second quarter, Allegiant passengers accounted for more than five percent of all TSA screenings conducted. That is astonishing given our market share. These results are a testament to our ability to not only manage capacity, but also our ability to manage cost, further highlighting we are best equipped to react to these fluctuations in market conditions.

“Although we were able to manage through the chaos of the quarter, arguably better than most, this environment is unsustainable long-term. It continues to be of utmost importance to strengthen liquidity positions. We completed the quarter with an average daily cash burn of $900 thousand, a 57 percent reduction from our initial forecasts. June bookings were a significant contributor to this reduction, with several days in June exceeding prior year booking levels. In fact, June bookings resulted in cash breakeven for the month of June. We continued to remain disciplined in regard to cost savings and successfully cut more than 38 percent of operating expenses from the quarter. These efforts coupled with funds received related to the CARES Act as well as executed financing arrangements enabled us to grow our liquidity position by nearly $200 million to end the quarter with total liquidity of $663.1 million. Unfortunately, the strength seen in June has since weakened as case numbers have risen. I am comfortable the strides made in building liquidity throughout the quarter will act as a safety net as we continue to manage the ever-changing demand environment.

“In conclusion, I would like to thank our 4,000 team members for their continued hard work. These are difficult times, yet our employees continue to go the extra mile to prioritize the health and safety of our passengers by performing additional cleaning procedures on board our aircraft, encouraging social distancing practices, and exemplifying the principles of our Going the Distance for Health and Safety program. Although I believe the effects of this pandemic will linger well into 2021 and possibly beyond, I firmly believe Allegiant’s flexible model and financial strength will not only sustain us during these uncertain times, but will ultimately uniquely position us to recover quickly upon a normalized return of demand.”