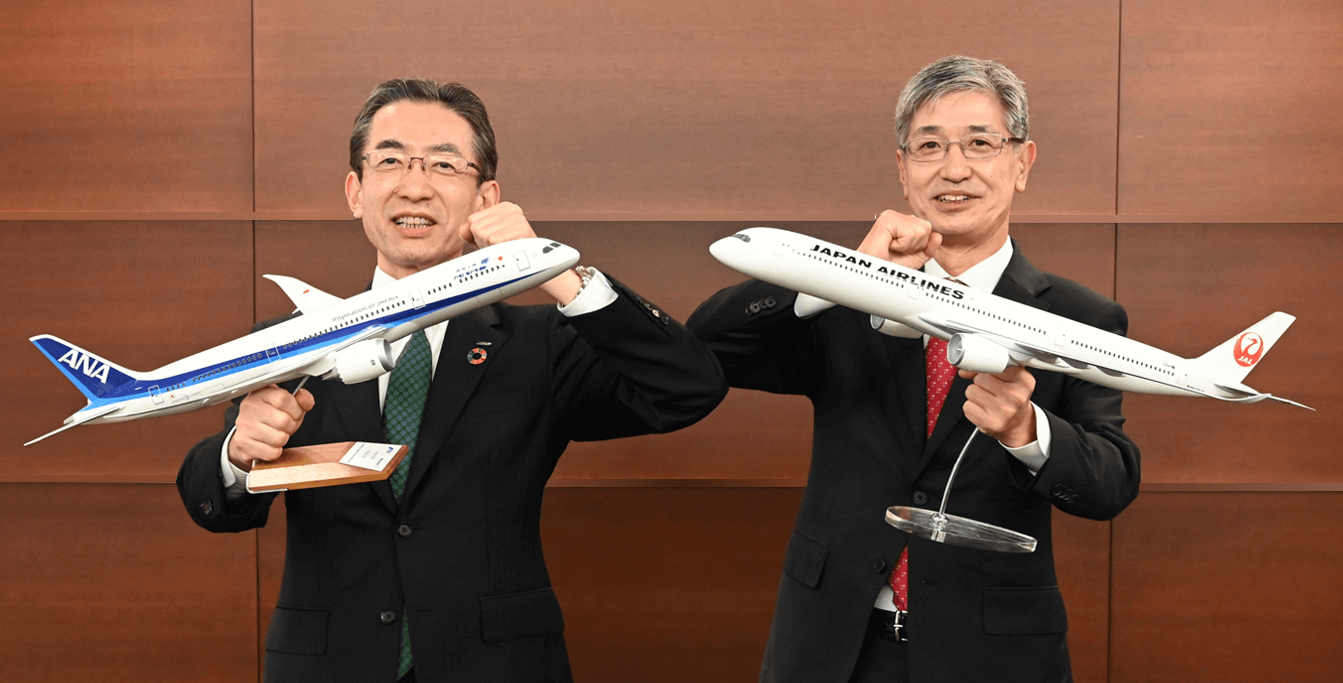 All Nippon Airways (ANA) and Japan Airlines (JAL), have published a joint report on the promotion and viability of Sustainable Aviation Fuels (“SAF”), which are expected to become central to the airlines’ shared goal of achieving carbon neutrality in air transportation by 2050.

In the report, “Toward Virtually Zero CO2 Emissions from Air Transport in 2050,” the companies have jointly assessed the benefits and features of SAF and the amount of SAF that would be required to support full adoption by the aviation industry.

The report also details the current logistical situation regarding the production, distribution, and utilization of this innovative new fuel.

As part of the airlines’ joint sustainability campaign, the study provided comprehensive analysis of the main issues facing the Japanese aviation industry as it moves towards reduced carbon emissions.

In addition to providing a roadmap to sustainability for both Japanese airlines, the report provides information on the positive impact that this transition would have on other countries and future generations.

Key Findings:
 Throughout their lifecycle, SAFs such as biomass can reduce CO2 emissions by approximately 80% compared to conventional fuels. This makes them essential for achieving full carbon neutrality by 2050 for airline industry operations. Furthermore, the full compatibility of SAFs with existing fueling equipment at airports and other infrastructure will help ease the transition towards this sustainable energy source.

 The current global production of SAF is less than 0.03% against the demand, and mass production and
utilization is urgently needed. In order to achieve their ambitious environmental goals by 2050, airlines must
accelerate the technological development, production, and utilization of SAF through heightened cooperation
and collaboration with industries that are connected to the aviation sector, as well as targeting SAF use of at
least 10% by 2030.

 Based on the forecasted growth rate of air transportation, the amount of SAF required in order to achieve net zero CO2 emissions by 2050 for domestic and international flights by Japanese airlines and for foreign airlines operating in Japan is estimated to be 2,300 million kL.

 The production and commercialization of SAF in Asia is still in its early stages compared to Europe and the U.S. However, the SAF market in Asia is expected to reach approximately 22 trillion yen as air transportation demand is expected to grow significantly in the future.

The airlines have both joined the World Economic Forum’s “Clean Skies for Tomorrow Coalition” and co-signed the 2030 Ambition Statement, pledging to cooperate in increasing the share of SAF in the global aviation industry to 10% by 2030.

Yuji Hirako, CEO and President of ANA: “We are in a situation where our generation needs to take immediate action toward the rapidly progressing climate change.

“Joining together with everyone involved in the aviation industry, we would like to pass on the blue skies to our children’s generation by steadily promoting SAF throughout the industry, and with this in mind, we have developed this report together”.

Yuji Akasaka, President of JAL: “The role of airlines in connecting people and building bridges between countries will not change in the future.

“In order to sustain the future of aviation, the new energy of SAF and the cooperation of many people with a variety of knowledge are essential.

“In order to expand the circle of cooperation, ANA and JAL will work hand to reach out to the Japanese industry”.