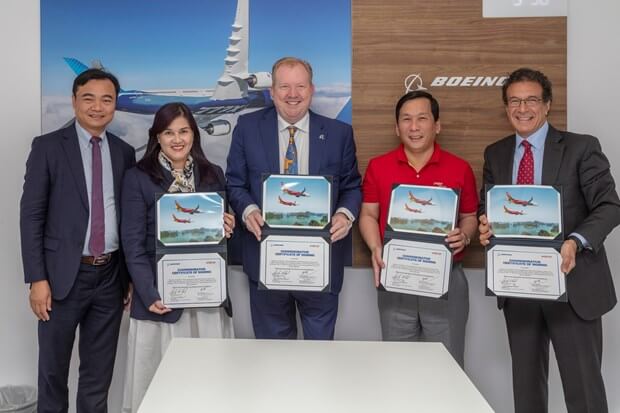 VietJet Aviation JSC confirmed a deal for 200 Boeing Co. 737 Max jets, giving the US planemaker another boost at one of the industry’s biggest events.

The first 50 aircraft will be delivered to Thai VietJet, the Vietnamese budget carrier’s affiliate in Thailand, the company said in a Tuesday release issued during the Farnborough International Airshow in the UK.

“Today’s agreement is a strategic move for VietJet and Boeing,” VietJet Managing Director Dinh Viet Phuong said in the statement.

The pact confirms each party’s “commitment to keep up with Vietjet’s international flight network expansion plan with a higher capacity.”

The carrier said in a separate statement the order is worth around $35 billion, including associated engine engineering services, and would bring around 200,000 jobs to the US. Sticker prices for jets are generally significantly reduced in large deals.

VietJet, known for its bikini-clad flight attendants, agreed in 2018 to double its order for Max jets to 200 after it signed an initial deal in 2016 during a visit to Vietnam by then-US President Barack Obama. The carrier’s announcement reaffirms that accord.

The agreement will also help Boeing shrug off nervousness over the 737 Max, which was grounded worldwide following two deadly crashes. The planemaker has made extensive fixes to the model following the accidents, and most regulators around the world have now approved the plane to fly again.

— With assistance by Ryan Beene