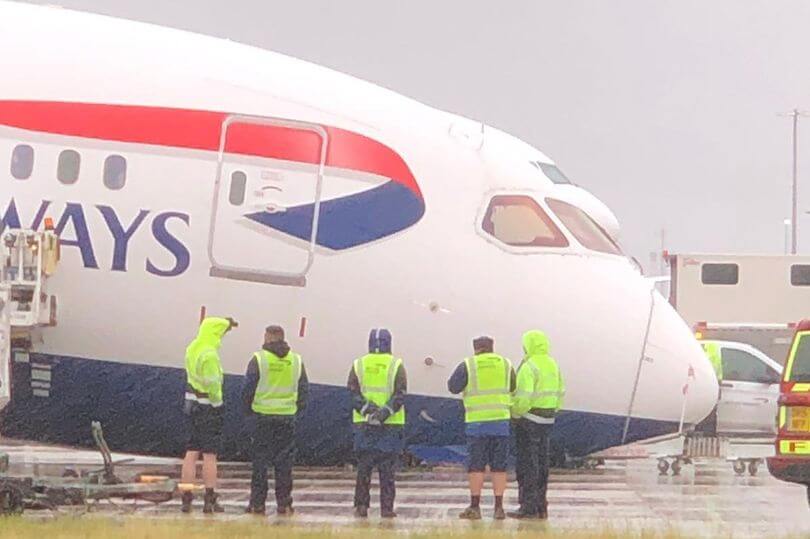 A British Airways plane suffered a “nose collapse” at Heathrow Airport this morning, as the jet was seen crumpling to the tarmac.

The incident took place as the British Airways Boeing 787-8 Dreamliner was about to take off at Heathrow.

The nose gear of the aircraft was seen collapsing, leaving the front tip of the plane resting on the ground.

It is not known what exact damage was caused, but images on social media showed the plane tilting forward while crew members rushed to solve the situation.

A British Airways spokesperson said that no passengers were onboard as it was a freight service.

The spokesperson said: “A freighter aircraft has been damaged while stationary on stand.

“As a freighter-only aircraft, there were no passengers on board.

“Safety is always our highest priority and we are investigating the matter.”

They tweeted: “An unidentified (at present) British Airways Boeing 787 has suffered a nose gear collapse at London Heathrow Airport this morning.

“Extent of the damage is currently unknown.

“Further details will be reported once available.”

The Boeing 787-8 was last recorded to be carrying out a flight from Moscow on June 16, before the incident took place, according to FlightRadar24.com.

This was also one of the airline’s first batch of Dreamliner planes, after BA started operating four 787-8s in 2013.

It comes after the airline company has already faced a turbulent year due to the Covid pandemic.

BA started to bring staff members back from furlough ahead of the easing of lockdown restrictions on foreign holidays on May 17.

But only a few countries have been put on the Government’s green list.

This has meant travellers do not have to quarantine when returning to the UK.

However, this decision has meant many more could go back onto the Government wage support scheme.

A British Airways spokesperson said: “Like many companies we’re using the furlough scheme to protect jobs during this unprecedented crisis.

“However, it’s vital the government follows its risk-based framework to re-open international travel as soon as possible, putting more low-risk countries, like the US, on its green list at the next available opportunity.”

Transatlantic operators BA, Virgin and American Airlines were said to have been hoping there could be an agreement with US President Biden and Prime Minister Boris Johnson at the G7 last week over a potential air corridor between the two countries.

However, they were told a taskforce would start looking at recommendations and nothing more was said.

Shai Weiss, who is in charge of Virgin Atlantic, said: “The creation of the Atlantic Taskforce is positive recognition of the importance of the UK-US travel corridor and a first step towards reopening the skies.”

He also added there were concerns over limited information on the time frame for reopening travel.