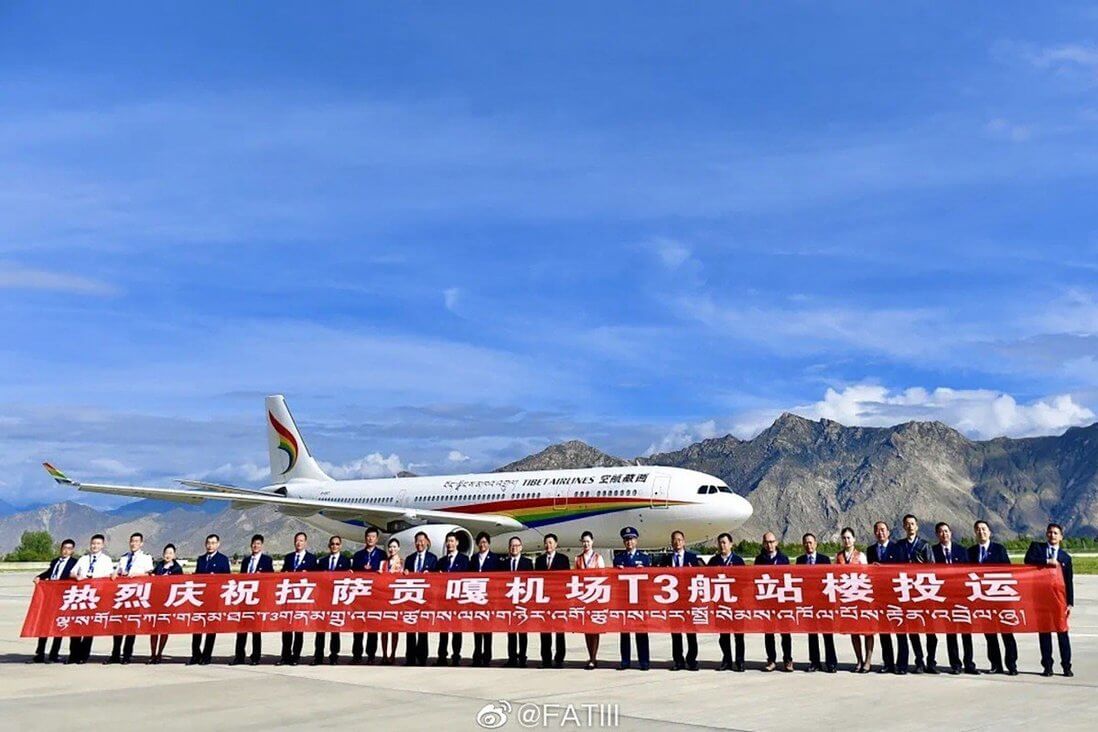 The biggest terminal on the Tibetan Plateau – at the region’s only international airport – went into operation over the weekend, boosting hopes of improved economic connections with South Asia and the domestic market.

The new Terminal 3 at Lhasa Gonggar Airport completes the expansion and reconstruction of the region’s largest aviation hub, a key project for China’s 2016-2020 five-year plan, the country’s social and economic development blueprint.

Built at an elevation of 3,570 metres (11,712 feet), Lhasa Gonggar is one of the highest airports in the world and the only one in Tibet running international flights. Work started on US$603 million Terminal 3 project in late 2017, and it is expected to enable the facility to handle around 9 million passengers and 80,000 tonnes of cargo annually by 2025.

“It can help the region to form economic connections to South Asia. For instance, it will be more convenient for South Asian tourists to visit Tibet,” said Liu Zongyi, secretary general of the Centre for China and South Asia Cooperation at the Shanghai Institutes for International Studies.

“The transport of emergency aid for South Asian countries will also become easier if they are in need [of the same].”

Liu said that the greatest strategic significance of the project was promoting the economic development of Tibet.

“[The region’s] development is limited by the highland climate and environment, and [the kind of] industries that can be developed there are very limited. Tourism, and local agriculture and animal husbandry are among the few options it has. These rely on efficient and fast transport. Besides, Tibet needs to import a large amount of production, construction and living materials from inland China every year.”

During a three-day visit to Tibet last month, President Xi Jinping called for more aid and construction in the region. Neighbouring India is also watching closely any major infrastructure progress in Tibet, after a deadly clash along the disputed Himalayan border last year.

The Tibet autonomous region has four other civil airports serving domestic fliers. The National Development and Reform Commission announced in April that Tibet would build three new airports, with construction to begin in May.

Bai Zhen, director of the Civil Aviation Administration of China’s Tibet bureau, said the expansion of the Lhasa Gonggar airport would “effectively help Tibet to further integrate into the Belt and Road Initiative”.

It will also promote regional economic and social development, she said at the launch ceremony on Saturday.