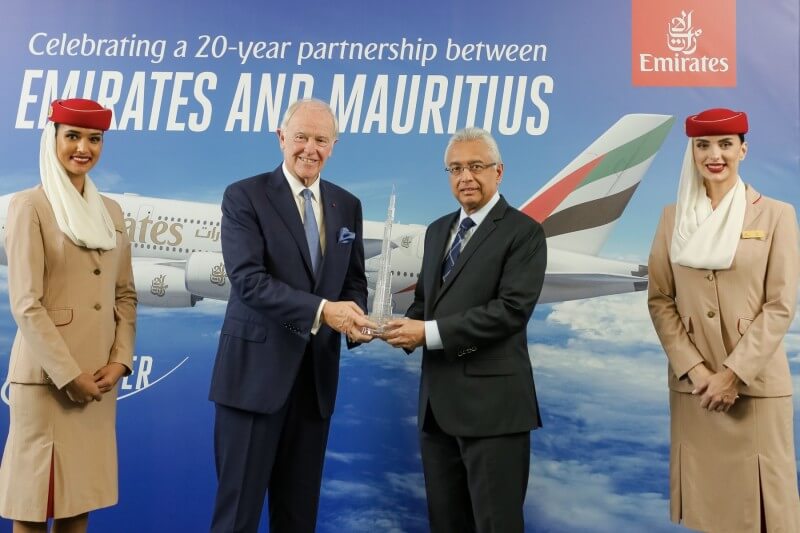 Sir Tim Clark, President Emirates Airline, re-affirmed the airline’s commitment to Mauritius at a dinner reception on the occasion of its 20-year anniversary of operations in the nation.

The event took place at the Labourdonnais Waterfront Hotel in the presence of the Honourable Pravind Kumar Jugnauth, Prime Minister of Mauritius, other dignitaries from the government as well as prominent business leaders and guests from the private sector.

Sir Tim Clark explained that Emirates is proud to support Mauritius’ economy and tourism agenda, by helping to bring visitors from all continents to the island.

“With the pandemic crisis behind us, I believe the future is bright for Mauritius and Emirates”, he said.

This year, Emirates celebrates 20 years of operations to Mauritius and a winning partnership that has seen more than 6.5 million passengers carried on the Dubai-Mauritius route since 2002.

Yesterday, Sir Tim Clark also celebrated the official opening of the Emirates Airline Swimming Pool and Sports Complex in Phoenix in the presence of the Honourable Pravind Kumar Jugnauth, Prime Minister of the Republic of Mauritius and other local dignitaries.

Emirates contributed USD 6 million to fund the construction of the swimming pool and sports facility which benefits the local community.