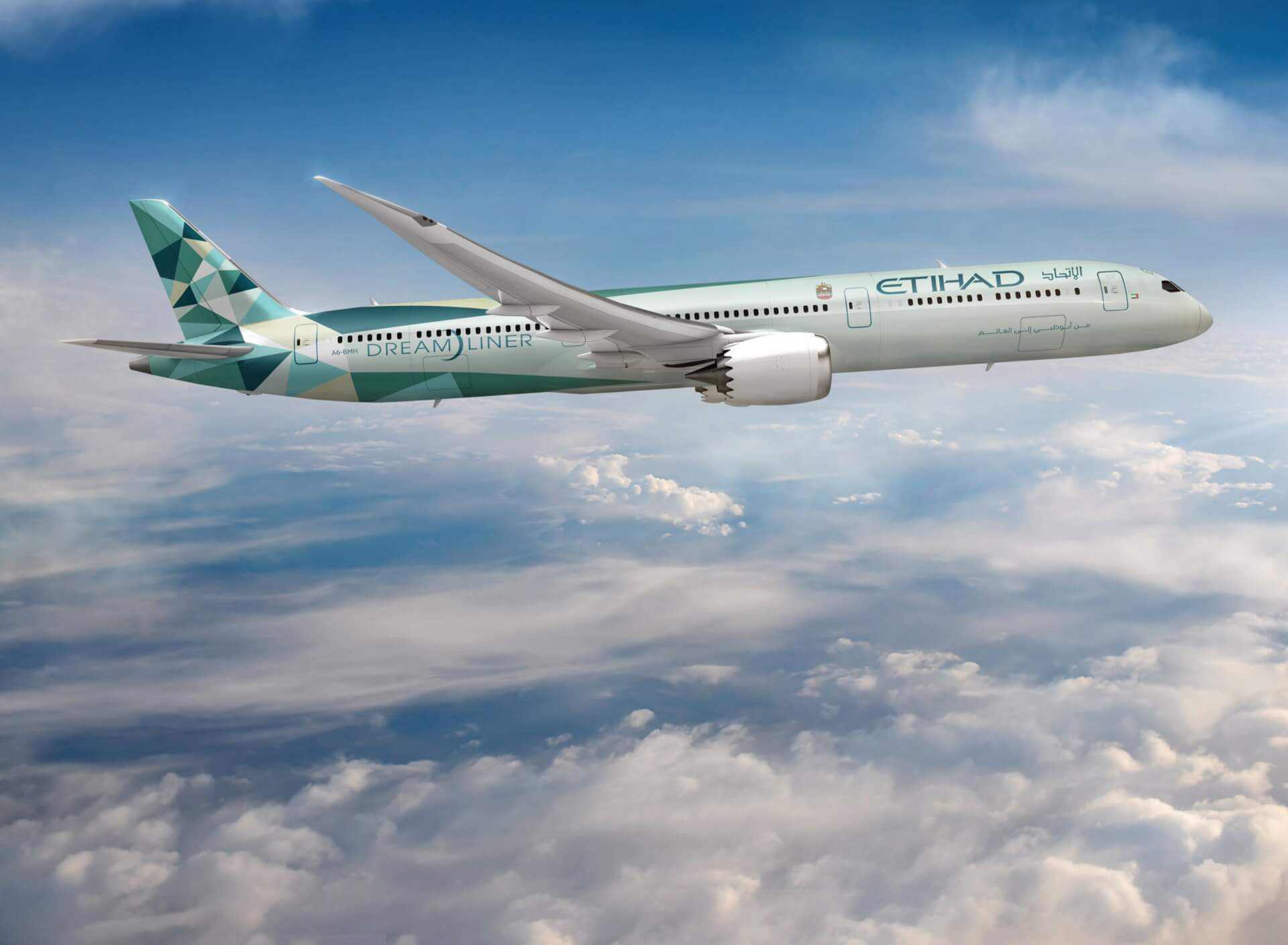 On Saturday 23 October, Etihad Airways operated its most sustainable flight ever, leveraging the learnings and efficiencies developed over the last two years of its comprehensive sustainability programme to reduce carbon emissions (CO2) by 72% in absolute terms compared to the equivalent flight operated in 2019.

The London Heathrow to Abu Dhabi flight is part of the Etihad Greenliner Programme – a two-year partnership between Etihad and Boeing using Etihad’s Boeing 787 fleet as a test bed for sustainability improvements in partnership with organisations across the industry.

In an industry-first, EY20 was the first commercial flight to explore contrail-avoidance.

Working with UK-based SATAVIA, the team identified potential areas of ice super-saturated regions in the atmosphere where harmful contrails are likely to form, and the flight route was adjusted to avoid these areas.

Based on the original and adjusted flight plan, the strategy avoided the production of approximately 64 tonnes of CO2e, with a fuel penalty of only 100kg, or 0.48 tonnes CO2.

“When Etihad committed to achieve net zero, it was acknowledged that it was only possible if the airline worked collaboratively and positively with our industry partners.

“That is exactly what Etihad has done with the Sustainable Flight. Of equal importance, Etihad, Boeing and its partners – airports, ANSP, and suppliers – used the flight to learn where further improvements could be made.

“This is only possible when we all work together, and we all commit to making whatever savings we can.

“Each of these partners played their own, significant role in the step we took today.” 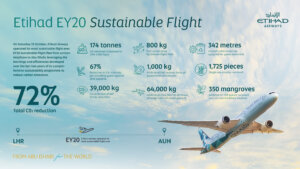 This included preparing the aircraft, engines and route planning systems to optimise take-off, en-route and landing flight paths and trajectories, minimising contrail formation, working with our guests to reduce their luggage and rewarding those that travelled light.

Once the aircraft arrived at Abu Dhabi, it was serviced by Etihad’s new fleet of electric vehicles for ground logistics such as baggage unloading.

Where electric vehicles were unable to be used, Etihad purchased bio-diesel to fuel equipment such as the airline’s passenger coach service between Abu Dhabi and Dubai, meaning all passengers, including those transiting to Dubai, were completely carbon neutral for the entirety of their journey.

The data gathered from the aircraft’s sensors was added to Etihad’s growing database on flight performance, and analysed using tools from Greenliner partner, GE Digital to improve understanding of flight performance and allow quick recognition of unsustainable activities.

“A fundamental part of the Greenliner programme is to explore the art of the possible,” Al Bulooki said.

“It is well known that SAFs are a credible alternative to current fossil fuels, however they are currently very expensive, and difficult to source and load onto the aircraft.

“EY20 was a dramatic example of those constraints wherein Etihad was unable to directly load the 38% SAF blend into the aircraft given inherent infrastructure constraints at Heathrow Airport.

“Instead, the SAF purchased by Etihad was loaded into the fuel hydrant system, which serves all airport users.

“While the EY20 did not in itself realise the full potential of the SAF, the potential benefit in CO2 reductions is real.

“Industry and governments must work together to address these issues through the funding of the research and development of SAFs and other parts of the planning and operating of flights. Etihad is looking forward to working on these issues”.

Douglas added: “The entire emissions reduction we achieved on this flight was through the operational steps and efficiencies employed and did not rely on off-sets.

“Nonetheless, off-sets, if done rigorously, also play a part in our sustainable future. The UAE has a large stock of mangroves which present nature-based solutions. In addition to their ability to reduce pollution from water and the atmosphere, if maintained properly, mangrove forests have the potential to avoid the release of CO2 into the atmosphere.

“That is why each guest on board this Etihad flight will have a tree adopted for them in Abu Dhabi’s Jubail Island Mangroves plantations.

“Adoption involves the maintenance and reforestation of existing forests with carbon storage potential. This is an important initiative for greening the UAE.”

“EY 20 Sustainable Flight brought together a long list of small changes that had been developed over the past two years under the Greenliner Programme, which was designed to identify opportunities that are available today to reduce emissions, rather than waiting for future technologies,” said Al Bulooki.

“Our single greatest learning from the past two years has been that even when solutions are available, they are not easily deployed on a regular basis due to constraints throughout the entire aviation eco-system.

“What was demonstrated on EY20 was the art of the possible; the next step is to work on how these can be deployed sustainably”.

“Etihad is determined to operate with sustainability as a core principle alongside safety and security, and is looking forward to many more of these small steps making a big difference.”