The International Air Transport Association (IATA) released an update to the impacts of the COVID-19 pandemic on air passenger numbers, employment and economies across Europe, and urged governments to coordinate to lift border restrictions and find alternatives to quarantine measures to avoid further economic damage.

Although the European market has seen an increase in the number of flights in recent months, supported by the reopening of borders between countries of the Schengen area and the non-Schengen EU states, flights are still more than 50% below the same period in 2019. Passenger numbers are currently forecast to fall by around 60% in 2020, which represents about 705 million passenger journeys. The near-term outlook for recovery in Europe remains highly uncertain with respect to the second wave of the pandemic and the broader global economic impact it could have. Passenger demand in Europe is expected to recover gradually and will not reach 2019 levels until 2024.

With air travel not recovering as originally hoped, the negative impact on employment has increased. More than 7 million jobs supported by aviation (including tourism) in Europe are now at risk (up from around 6 million estimated in June).

“It is desperately worrying to see a further decline in prospects for air travel this year, and the knock-on impact for employment and prosperity. It shows once again the terrible effect that is being felt by families across Europe as border restrictions and quarantine continue. It is vital that governments and industry work together to create a harmonized plan for reopening borders,” said Rafael Schvartzman, IATA’s Regional Vice President for Europe.

Analysis of the largest European markets shows a decline across all metrics since the previous IATA estimates in mid-June. (These are impact estimates for the full-year 2020.) 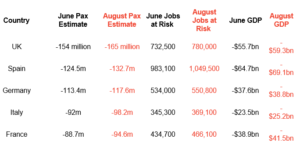