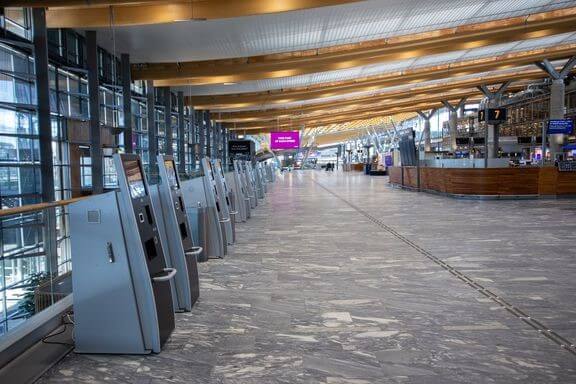 The loss of traffic and revenue at the airports has made it necessary for Avinor to enter into a dialogue with the owner about measures to strengthen the Group’s liquidity and equity.

In parallel with the follow-up of the Group’s short-term liquidity situation, significant cost-cutting measures are being implemented.

“We depend entirely on financial support to continue the business. It is therefore very good news when the government wants to remedy the financial situation in Avinor with a subsidy to Avinor of up to NOK 4 270 million through the revised national budget.” says Avinor CEO Dag Falk-Petersen.

9.7 million passengers traveled across Avinor airports in the first quarter of 2020. This is a 21 percent reduction compared to the corresponding reporting period in 2019.
The April drop was a full 91 percent against 2019 figures.

The cargo figures, on the other hand, are solid:

“It is gratifying to see that Oslo Airport, as the only airport in Northern Europe, manages to maintain a complete air freight operation during the COVID-19 crisis. Effective air freight to major markets around the world is important for Norwegian competitiveness, and for Norwegian seafood, air freight is a prerequisite for being able to reach the world markets“. Falk-Petersen points out.

Operations are adapted to changing traffic volume
Operation and infrastructure are adapted to reduced traffic volume. In this connection, Avinor closed nine airports on March 18 with an alternative airport within a reasonable distance. It has been decided to reopen these airports on June 1, 2020. – Avinor has good control over its own situation, operations and ongoing preparedness. Avinor has also initiated layoffs, and over 550 employees have now been notified that they will be laid off in full or in part. In addition, the top management levels have voluntarily agreed to a salary reduction for three months, the CEO concludes.

Profit before tax: minus NOK 476 million (minus NOK 48 million)

Operating expenses: NOK 2 065 million (NOK 1,666 million). The increase was mainly due to a provision for losses of claims of NOK 236 million. The airlines are in a particularly difficult financial situation.