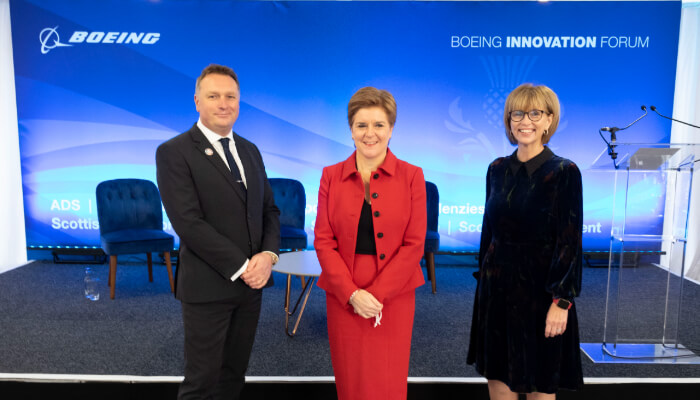 The two-day event which welcomed First Minister Nicola Sturgeon is being co-hosted by Glasgow Airport and Boeing and brings together partners in Scotland and the broader aviation sector to demonstrate the role today’s sustainable technologies can play in the future of aviation and prepare the industry for a more sustainable future.

Derek Provan, Chief Executive of AGS Airports Ltd, which owns and operates Glasgow Airport, said: “We are proud to host the innovation forum in partnership with Boeing and it was a pleasure to welcome the First Minister to Glasgow Airport today.

“This two-day event is about recognising the huge progress the aviation and aerospace sectors have made as we work towards decarbonising what is truly one of the most global industries and looking ahead to what else we can achieve through innovation and partnerships on our collective journey to net zero.” 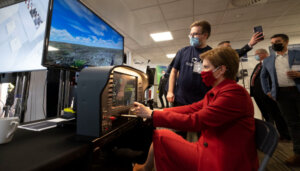 This year’s plane is a new 737-9 from Alaska Airlines. Among the technologies being tested are an engine nacelle designed to reduce noise and cabin sidewalls made from recycled material.

The Boeing Innovation Forum is under the umbrella of the Boeing Scotland Alliance, which was launched in 2020 with Scottish Enterprise. It is designed to explore opportunities to work together in Scotland, to double Boeing’s supply chain and create 200 new quality jobs in five years.

On Tuesday, Boeing and the National Manufacturing Institute Scotland opened a new £11.8 million R&D programme next to Glasgow Airport that will explore novel manufacturing technologies for metallic components.

“When we signed the Boeing Scotland Alliance almost two years ago we wanted to work in many locations and sectors, to combine the best of what Boeing can offer with the world-class supply chain, startups, universities and research centres in Scotland,” said Sir Martin Donnelly, president of Boeing Europe and managing director of Boeing in the UK and Ireland.

“This week’s events are a showcase of what we’ve done collectively already, and also what is possible in Scotland and the wider UK when industry, government and academia work collaboratively to create a more sustainable future.”

During her speech to over 300 delegates from across the aviation and aerospace sectors, the First Minister announced that Glasgow Science Centre will become home to the United Kingdom’s first Newton Flight Academy, a permanent classroom used to teach students aviation-related STEM concepts that will include three full-motion flight simulators.

The academy is made possible through funding from Boeing and is being developed in partnership with First Scandinavia.

In 2018, Boeing invested more than £3.5 million to set up a network of STEM-focused “Newton Rooms” around Europe. This will be the first full academy outside of Norway when it opens in the spring of 2022.