Honeywell has unveiled a new catalyst designed for aircraft cabin air systems that can help reduce delays, cancellations and unscheduled maintenance due to in-cabin odors from certain volatile organic compounds in “bleed air” — also known as undesirable “smell-in-cabin” events. In clinical tests, Honeywell’s fourth-generation Combined Hydrocarbon Ozone Catalyst, CHOC4, has proved capable of removing two to three times more VOCs that cause undesired odors compared with other solutions. Honeywell’s solution has also been shown to be more effective in the removal of ozone at lower temperatures. 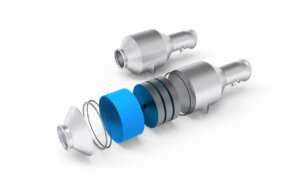 Air supplied to a cabin for air conditioning and pressurization, also known as bleed air, comes directly from the engines and auxiliary power unit. Sometimes it contains volatile organic compounds (VOCs), fumes or particles from sources like jet fuel, hydraulic oils or de-icing fluid. When VOCs enter the cabin through the bleed air, they can cause unwanted odors in the cabin, resulting in delays.

Honeywell’s new proprietary catalyst CHOC4 is applied to an aircraft’s ozone converter to catalyze or absorb compounds that cause undesirable odors. It can be applied during normal maintenance as an upgrade to the existing converter unit at a fraction of the cost of a new unit. It is available now for Airbus A320 aircraft, with plans to expand to additional platforms in early 2021.