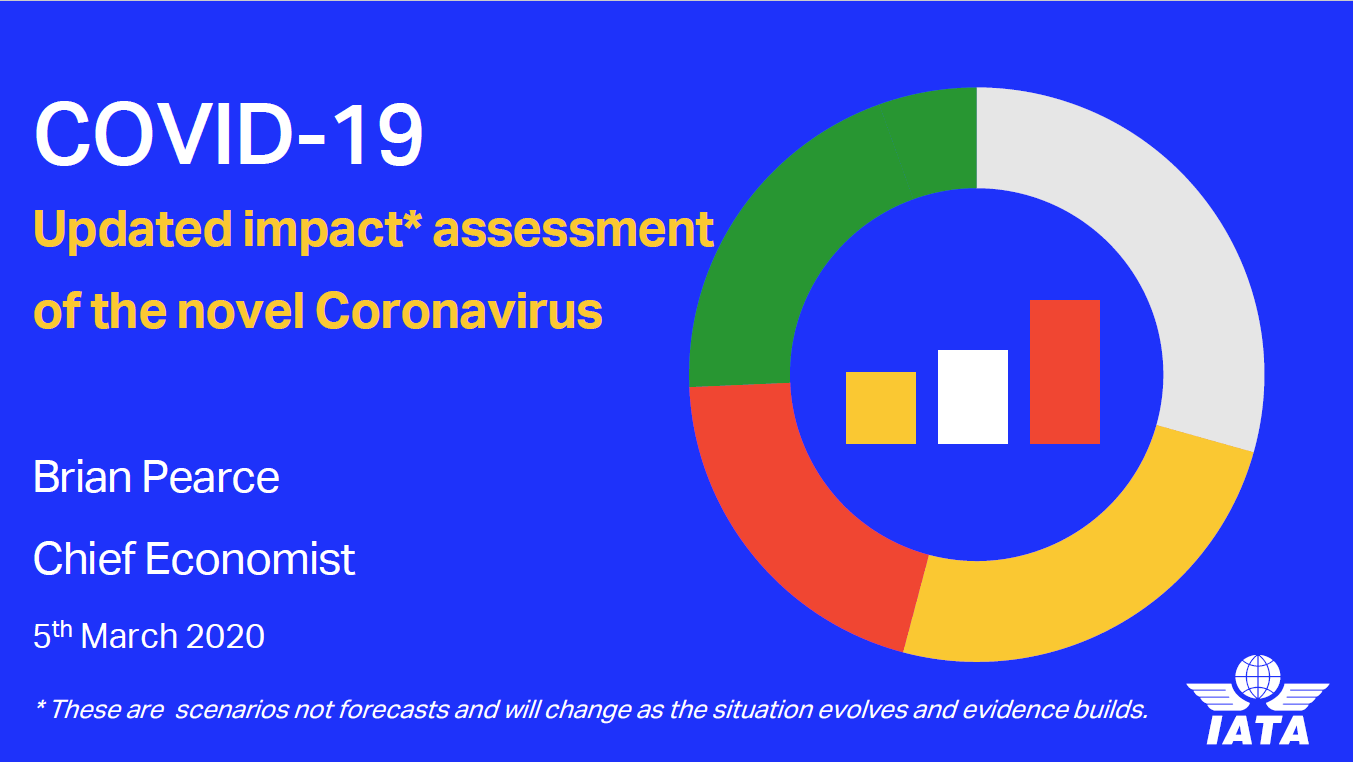 The International Air Transport Association (IATA) updated its analysis of the financial impact of the novel coronavirus (COVID-19) public health emergency on the global air transport industry. IATA now sees 2020 global revenue losses for the passenger business of between $63 billion (in a scenario where COVID-19 is contained in current markets with over 100 cases as of 2 March) and $113 billion (in a scenario with a broader spreading of COVID-19). No estimates are yet available for the impact on cargo operations.

IATA’s previous analysis (issued on 20 February 2020) put lost revenues at $29.3 billion based on a scenario that would see the impact of COVID-19 largely confined to markets associated with China. Since that time, the virus has spread to over 80 countries and forward bookings have been severely impacted on routes beyond China.

Financial markets have reacted strongly. Airline share prices have fallen nearly 25% since the outbreak began, some 21 percentage points greater than the decline that occurred at a similar point during the SARS crisis of 2003. To a large extent, this fall already prices in a shock to industry revenues much greater than our previous analysis.

To take into account the evolving situation with COVID-19, IATA estimated the potential impact on passenger revenues based on two possible scenarios:

This scenario includes markets with more than 100 confirmed COVID-19 cases (as of 2 March) experiencing a sharp downturn followed by a V-shaped recovery profile. It also estimates falls in consumer confidence in other markets (North America, Asia Pacific and Europe).

This scenario applies a similar methodology but to all markets that currently have 10 or more confirmed COVID-19 cases (as of 2 March). The outcome is a 19% loss in worldwide passenger revenues, which equates to $113 billion. Financially, that would be on a scale equivalent to what the industry experienced in the Global Financial Crisis.

Oil prices have fallen significantly (-$13/barrel Brent) since the beginning of the year. This could cut costs up to $28 billion on the 2020 fuel bill (on top of those savings which would be achieved as a result of reduced operations) which would provide some relief but would not significantly cushion the devastating impact that COVID-19 is having on demand. And it should be noted that hedging practices will postpone this impact for many airlines.

“The turn of events as a result of COVID-19 is almost without precedent. In little over two months, the industry’s prospects in much of the world have taken a dramatic turn for the worse. It is unclear how the virus will develop, but whether we see the impact contained to a few markets and a $63 billion revenue loss, or a broader impact leading to a $113 billion loss of revenue, this is a crisis.

“Many airlines are cutting capacity and taking emergency measures to reduce costs. Governments must take note. Airlines are doing their best to stay afloat as they perform the vital task of linking the world’s economies. As governments look to stimulus measures, the airline industry will need consideration for relief on taxes, charges and slot allocation. These are extraordinary times,” said Alexandre de Juniac, IATA’s Director General and CEO.

BARIG: Corona Crisis Calls for a Shared Sense of Responsibility

Argentina Could Pay Over $880 Million to Save State Airline

Statement from the board of TAP SGPS, SA