Using VesselsValue data, Paul Saupe, ADS-B Analyst, explores the flights and their respective countries that continued to operate into Russia.

This article looks into the reduced connectivity between Russia and the West amidst ongoing political tensions, highlighting the airlines that have bypassed sanctions placed on Russian aircraft entering Western airspace.

“Running a very close second are services from Turkey.

“The cessation of flights from most European countries is clearly a direct consequence of the closure of their airspace to Russian aircraft, and then Russia’s response to do the same to European aircraft in return.

“Serbia stands out as a point of interest, given its location in the middle of the European Union (and NATO) territory.

“The most popular route between Serbia and Russia is Belgrade Nikola Tesla Airport (BEG) to Sheremetyevo International Airport (SVO).

“It is clear that Western sanctions have significantly changed flight connectivity and routing patterns into and out of Russia.

“It is also clear that connectivity to Russia has not been choked off completely, with Turkey and now the United Arab Emirates acting as the main global gateways. 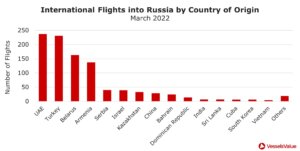