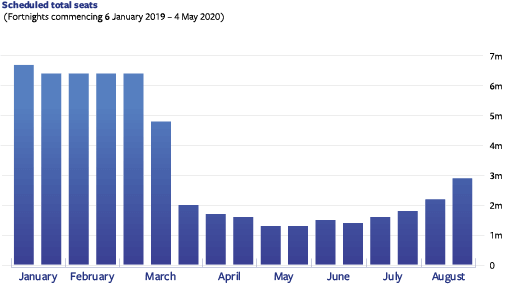 It was in mid-June when three of the biggest global aviation bodies came together to address the dire state of the industry in Africa caused by Covid-19.
The International Air Transport Association (IATA), Airports Council International – Africa (ACI Africa) and the International Civil Aviation Organization (ICAO) Regional Offices for African States joined forces to call upon the continent’s governments to start driving a recovery.

Specifically, the three bodies urged these governments to adopt ICAO’s global guidelines set out in its report Takeoff: Guidance for air travel through the Covid-19 public health crisis, which aims to ensure the safe and harmonised restart of aviation in the region.The report includes a number of measures ranging from social distancing where possible and the wearing of masks onboard aircraft to health screening and contact tracing for both passengers and aviation workers.

And it came at a vital time. Statistics released by aviation data and analytics firm OAG show that in the four weeks from 11 May, when African aviation hit its lowest point, just 2.6 million total scheduled seats were available on the continent.

This represents a fall of 80.2 per cent on the 13.1 million seats available for four weeks beginning 6 January this year.
Unsurprisingly, and as has been the case in the rest of the world, international services were hit far harder than domestic.

OAG’s data shows that in the four weeks from 6 January, there were a total of 8.2 million scheduled international seats but by the four weeks from 4 May, the number had dropped by 83.3 per cent to 1.4 million. In the same period and during the same time frames, the total number of domestic scheduled seats fell by 75 per cent from 4.9 million to 1.2 million.

The story is a similar one for both mainline airlines and LCCs, which initially had 11.2 million and 4.9 million scheduled seats respectively for the same four-week period at the start of the year. Both sectors were equally impacted, with mainline seats dropping by 83.3 per cent to 1.9 million, while those scheduled for the LCCs fell by 85.2 per cent to 734,169 by May.

Of the five biggest mainline airlines at the start of the year, all had been hit hard by mid-May with Royal Air Maroc suffering the most having seen its scheduled seat numbers fall from 675,120 in the four-week January period by 99 per cent to 6,429 in May.

South African Airways fared best, but with seat numbers falling from 661,958 in January to 96,846 in May, a fall of 85.4 per cent, bosses will not be relaxed by the numbers, especially following the recent restructure of the airline.
Counting the cost
IATA, ICAO and ACI Africa were clearly concerned about the financial cost of the various lockdowns and rule changes implemented across Africa as a result of Covid-19.

Their own figures released in conjunction with the report show that demand for flights in the region is likely to fall by 58.5 per cent year on year in 2020, resulting in a net loss of $2 billion for its airlines following a $6 billion decline in passenger revenues.

They also predict African airports will be similarly hard hit with a 51 per cent fall in revenue, around $2.2 billion, in 2020. Wider repercussions would also hurt, with as many as half of the 6.2 million jobs supported by aviation lost, while the $55.8 billion generated by the industry in GDP in 2020 could drop by as much as $28 billion.

Speaking at the launch of the report, ICAO Eastern and Southern African (ESAF) office regional director Barry Kashambo urges governments across the continent to adopt the guidelines as soon as possible.

He adds: “Based on the latest medical evidence and consistent with health best practices, the ICAO Takeoff guidance provides governments with a framework for restarting aviation while protecting public health.
“Governments in Africa are encouraged to implement the guidance urgently and in a harmonised and mutually recognised way to allow aviation to safely start contributing to Africa’s economic recovery post Covid-19.

“Air connectivity is critical to economic and sustainable development in and across the continent.”

“But guidelines mean nothing if they are not implemented. And that is our main message to governments in Africa.

“Deviations from the guidance and mandatory approaches, especially on quarantine and social distancing, will damage public confidence, make it harder to operate effectively, slow down the industry restart and increase the economic pressures already created by Covid-19. This would be harmful to public health and the economic recovery.”

ACI Africa secretary general Ali Tounsi says: “Safety and security remain the industry’s main priority, and both are firmly entrenched into every airport’s operations and corporate culture.”
Albakri also addresses the dilemma facing governments around the world that are torn between protecting their populations or their economies from the ongoing ravages of Covid-19.

He adds: “Restarting international connectivity safely while ensuring that aviation is not a meaningful source for the spread of Covid-19 is not an option but a must.

“Aviation is facing the biggest challenge of its history; we need all hands on deck to get the industry up and running again and we are committed to making the journey as seamless and risk-free as possible.
“We will collaborate with and support states to implement these guidelines in the fastest and most efficient way and encourage governments and other industry stakeholders to reach out to us for support.”

Questioning quarantine
And Albakri has kept his word too despite some green shoots of recovery apparently emerging. In the four-week period from 6 July there were 3.4 million total seats scheduled for the continent, part of an upward trajectory which has continued into August. Only LCCs have failed to see a resurgence in scheduled seats, although the previous fall seems to have stabilised.

However, by July Albakri was becoming concerned by the increased use of quarantine in both Africa and the Middle East (AME) as 36 countries introduce it, accounting for 40 per cent of all quarantine measures globally. He argues that with as many as 80 per cent of travellers unlikely to travel if they face a period of quarantine as a result, any signs of recovery could be stamped out.

Instead, he urges governments to consider alternative measures, including discouraging symptomatic passengers from travelling, using health screening to mitigate the risk and contact tracing to ensure travellers can be properly monitored, wherever they are.

“The region is effectively in complete lockdown with the travel and tourism sector shuttered.”

Which re-emphasises the need for governments across the African continent to put aside their historical differences and come together for the benefit of all. Whether or not they decide to do so remains to be seen.