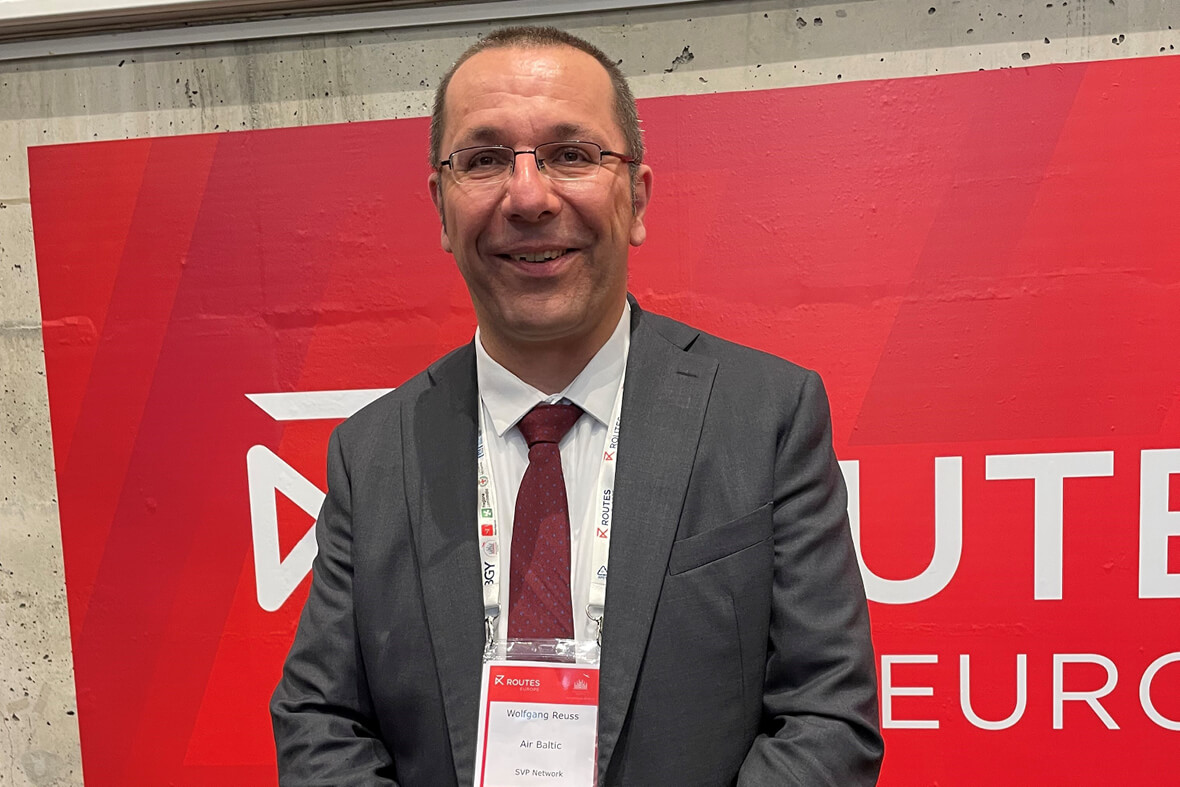 Wolfgang Reuss, senior vice-president network management at airBaltic, was set a target for the Riga-based airline to carry 3.3 million passengers around the Latvian flag carrier’s system in 2022. That was before Russia invaded Ukraine.
His board has retained the 3.3 million target despite the loss in traffic as a result of the invasion – and Reuss and his team are scrambling to fill the void. “We have a large network in Ukraine and the Russian Federation,” he explains. That network featured four daily flights to Kyiv plus services to Lviv and Odessa, in addition to five routes to Russia cities. The carrier was also examining more potential Russian destinations, work which has stopped, while services to Armenia, Azerbaijan and Kazakhstan were cancelled because airBaltic cannot overfly Russia to reach them.
As a direct result of the situation, airBaltic took two of its 34 Airbus A220s out of the network, while the indirect impact is that fewer inbound passengers are transferring to other destinations in the carrier’s network, said Reuss. It all adds up to a major setback for airBaltic.
One of its answers is to send more aircraft out. “In the short term we decided to increase our ACMI (Aircraft, Crew, Maintenance, and insurance) fleet to our long-term ACMI partners,” said Reuss. “And we have increased our leisure flying with a focus on beach destinations.” The carrier has 99 routes planned for 2022, a 4.3% increase on the number served in 2021, and a revenue target of €400 million (US$426 million) for the year (96% above 2021).
While about 60% of its capacity centres on Riga, airBaltic also has regional hubs in Tallinn (Estonia) and Vilnius (Lithuanian) and in May it opened a new base in Finnish city Tampere with one A220 located there. “This city is completely underserved,” said Reuss, of the airline’s first base outside the Baltics.
Following the invasion of Ukraine, airBaltic has reworked its Riga hub strategy, which formerly operated with an East-West traffic flow. Now, it is focused on Baltic traffic flows to the west and southern Europe’s leisure destinations.
The carrier’s ACMI business will see 11 of its A220s operating for Lufthansa Group airlines, with seven flying for Eurowings and its Discover brand, and four flying for SAS, said Reuss. “ACMI is a business we want to develop,” he added.
airBaltic hopes this swift redeployment of capacity will keep it on track in 2022 despite the trauma its business model has suffered. By end of the year, it will have a single-type fleet of 40 A220s (out of an order for 50 of the type with another 30 options). It will decide on whether to convert the options in 2023.
Reuss describes the carrier as a hybrid, with a raft of codeshare partners and its regional hub system. Rather than join an alliance, it will pursue its role as a strong independent player.