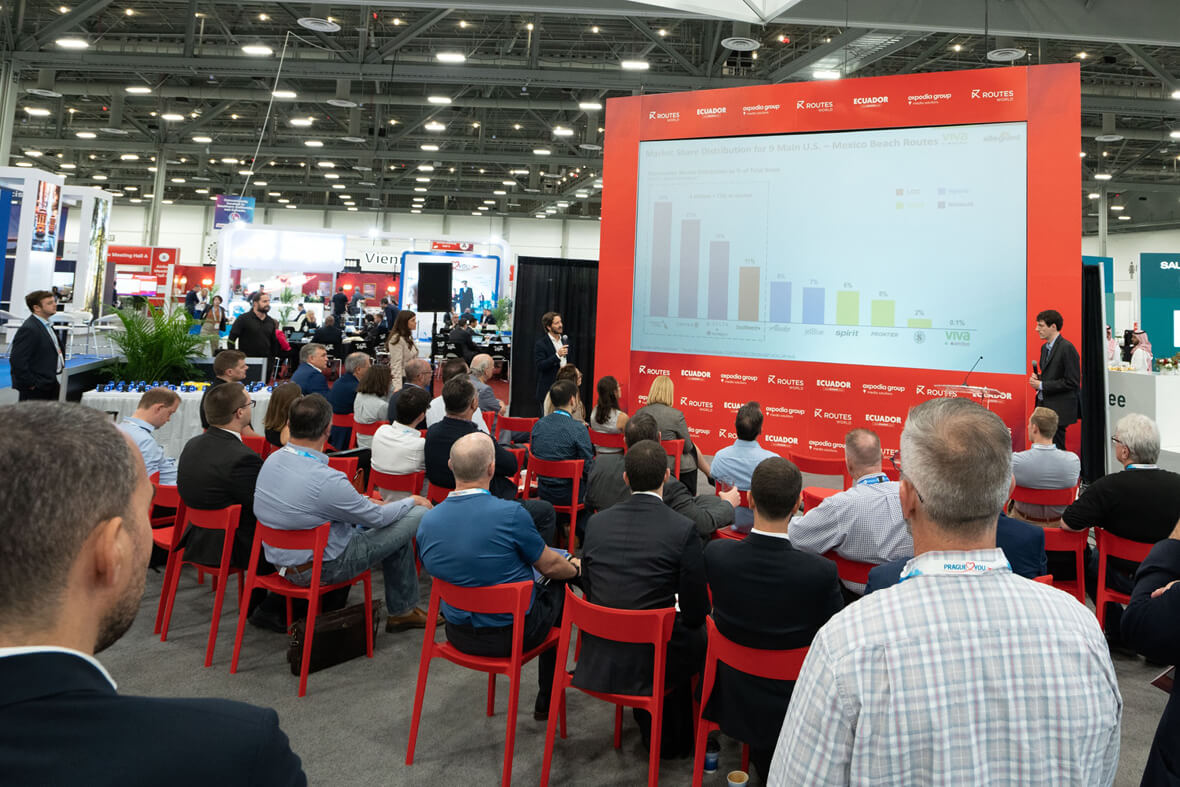 Typically, joint ventures between large legacy airlines aim at reducing costs for each player and boost their ability to capture connecting passengers, but the Allegiant and Viva Aerobus tie-up has a different aim, according to John Pepper, Vice-President Corporate Development at Allegiant, speaking during an Airline Briefing at Routes World.
The goal is to extend their business models, whilst still serving the underserved communities they already fly to and lowering ticket prices with non-stop routes, said Pepper. “It is the first of its kind, metal neutral joint venture,” he claimed. The leads of the JV are optimistic about the partnership, with their agile and similar business models complementing each other like a “marriage of two airlines”, with it already easy to make joint decisions, said Javier Suarez, Chief Network & Alliances Officer at Viva Aerobus.
This “fully-integrated” agreement will enable Allegiant and Viva Aerobus to have cross-functionality between their respective loyalty programs, codesharing, sales systems and route networks to operate flights together with all the benefits and advantages of both airlines.
As Allegiant currently does not serve Mexico, it will be able to rapidly enter and expand in this market, said Pepper. It will serve a mixture of small, medium- and large airports, especially those where passengers are in a highly concentrated market, he added. For example, where a flight from Nashville to Cabo San Lucas can typically cost $595 return on a 12-hour trip with a stopover, a new non-stop route served by Allegiant, will drop the ticket price by half and will reduce travel time, said Pepper.
Benefits also arise from the trends from each company’s seasonality, in which Allegiant has a strong first quarter, and a weaker third quarter. Viva on the other hand had a weak first quarter and strong third quarter, commented Pepper and Suarez.
The US-Mexico market has grown rapidly post-pandemic, but the leisure component of US travellers heading for Mexican beach destinations has been hard for Mexican carriers to target. “This process is a game changer” in terms of accessing this traffic, said Suarez. “[The JV] has so much potential and could change Viva Aerobus in a drastic way,” he added.
The companies are dividing the network planning, with Allegiant planning the majority of leisure routes and Viva Aerobus planning most business markets and less frequently served routes. Eventually, they hope to make all decisions jointly. Currently the JV is operating with eight working groups ranging from fleet planning to IT and customer experience groups which have already been working closely together for the last 10 months. The executive working group meets on a quarterly basis for business monitoring and decision making.
During the World Routes event the Mexican government approved the Joint venture. However, antitrust immunity has not yet been approved by the US Department of Transportation. Both companies expect this to be a slow process in the USA and are currently reaching out to airports and stakeholders seeking support for the alliance. The JV partners hope to be granted US antitrust immunity in the next six months, which may be helped if Mexico has its FAA Category 1 status re-approved.