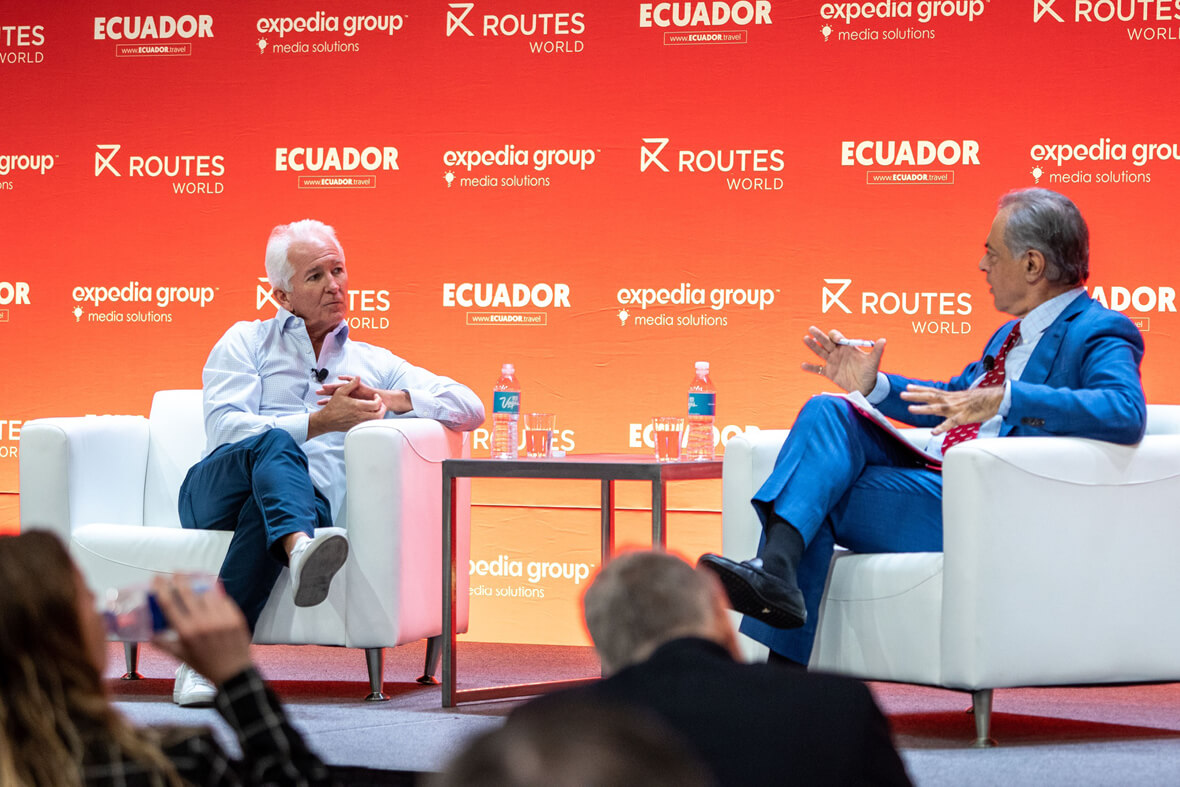 Las Vegas-based Allegiant Air is an airline with a difference. Its President John Redmond made a rare conference appearance at Routes World to discuss the travel company’s strategy and his outlook for the business. Mark Pilling reports.

John Redmond may have been the President and Chief Executive Officer of Allegiant Air since 2016 but for the delegates of Routes World this was for many the first time they had seen or heard of him. Allegiant Air, and its Founder and Chairman Maurice Gallagher, like their business to fly under the radar and mostly avoid public engagements.
It is remarkable that a company with annual revenue of US$1.7 billion can retain such a low profile. But Allegiant Travel Company, the parent of Allegiant Air and Allegiant Vacations, is different. As Redmond told delegates, although Allegiant flies to a lot of airports, “a lot of people still don’t know who we are”.
Allegiant, which is based in Las Vegas, is happy not to attract attention and stick to a business model that has served it well since it was founded in 1997. “We will stay with what we’ve been doing [since the late 1990s],” Redmond told interviewer Michael Bell of the Korn Ferry executive search firm.
Allegiant offers an air service, but it is basically an integrated travel company. “Since our inception the idea is we’ve always been about having other travel in our offer,” said Redmond. It includes hotels and car rental in its travel packages in addition to the flight.
For example, in Allegiant’s Las Vegas homeland, 12% of everyone who books a vacation in the city books a hotel in conjunction with their air fare, he noted. “Our packaging is better than anyone else can offer,” he said. “One of the reasons why is we have brand trust because we deal one-to-one with the consumer – we do not deal with OTAs (online travel agencies.” There is another benefit too, said Redmond: this approach means Allegiant can “most definitely” achieve higher margins.

Fleet growth
Allegiant Air has grown to become a large carrier in North America. Today it has a fleet of 124 Airbus A319s and A320s and has 50 Boeing 737 Max narrowbodies on order for delivery beginning in August 2023. Its large fleet and widespread North American network made it an attractive target for many airports attending Routes.
The carrier will continue its policy of looking out for attractive deals on the second-hand aircraft market. “We have always been an opportunistic airline and that won’t change,” said Redmond. “But as we grow, we need a pipeline of aircraft coming in [explaining the need for the Boeing order of new 737s]. This ensures our ability to continue to grow and retire aircraft when we need to.”
The airline serves what Redmond described as 100 origination cities and 30 leisure destination cities, with the originating cities mostly secondary airports. “You are not going to see us flying into Miami or San Francisco [International]. We serve those areas, but not hub airports, and will stick with that strategy,” he explained. Allegiant does not want the expense of serving hub airports, preferring lower cost alternatives.
And Redmond sees plenty of opportunities to expand its point-to-point network and business reach. “We have 1,400 domestic route opportunities and even more on the international side. There are routes we have not even touched yet,” he explained.
Allegiant has seen a strong rebound in traffic and revenues in the past two quarters as domestic travel has returned with a vengeance. In its 2 November third-quarter results announcement Redmond said: “Demand continues to outpace 2019. Forward bookings into the upcoming holiday season are tracking at higher loads and significantly higher yields than at this point in 2019.”
This is despite the carrier being negatively impacted by Hurricane Iain, which caused disruption and damage to the eastern USA in August. Recovery is underway, said Redmond.

Partnerships
Redmond described Allegiant’s transborder alliance with Mexican low-cost carrier Viva Aerobus as an “incredibly symbiotic relationship (see box story for more details). However, asked if it will seek other partnerships Redmond is typically blunt: “We haven’t given it a thought. We are concentrating on the Viva partnership.”
In North America, the topic of airline consolidation is in the news again with the acquisition of Spirit Airlines by JetBlue Airways. What is Redmond’s view of this move? “Our business model is incredibly unique. We concentrate all our efforts to run our airline the best way we can. I don’t look at merger and acquisition activity at all,” he explained.
“[My job is] to make Allegiant even better and differentiate the business model of Allegiant from the rest of the pack,” he said. “We are so unique there is no-one else like us out there.”
Where Allegiant is looking to diversify is in the creation of its first destination resort. The 785-room Sunseeker Resort Charlotte Harbor on the west coast of Florida, south of Tampa, is scheduled to open in May 2023.
Moving into the hotel game may seem a bold move, but for Redmond this is familiar territory with his background in hospitality, hotels and casinos. ““As airlines, we go to incredible lengths to get 10% of people’s total holiday spend.”,” he explained. “The strip properties [hotels on the famous Las Vegas Boulevard] take [the rest of their] dollars,” he said, referring to the other 90% of consumer spending. “I was on the receiving end of all that benefit,” he noted.
“The south-west Florida market is under-served. The Sunseeker will be one of the largest hotels [in that area] and allows us to grow that other 90% of the leisure customer spend,” Redmond said.
Allegiant will not stop with just one Sunseeker property. “That resort will establish the credibility of the Sunseeker brand and enable Allegiant to go and manage or brand 10, 20 or 30 of them. That would be tremendous,” said Redmond. The expansion could be in the USA or in Mexico.

Pilot pipeline
Asked about how the pilot shortage in North America is impacting Allegiant, Redmond said the carrier has a simple answer. “Our business model always allowed our pilots and flight attendants to start and end their day in their hometown. We believe that is a big positive,” he explained.
The carrier was in the middle of negotiations with the pilots at the time of Routes in October. “There is an aura of uncertainty out there as negotiations are ongoing but we feel very comfortable the pilot pipeline will be able to match our network development plan,” he said.
Redmond exudes the confidence of an executive who has been in a business for years, with a tried and tested model and the trust of his boss. In fact, Redmond and Gallagher are clearly peers and friends. “Maury and I we think alike. I’ve been on the Allegiant board for 15 years. We have lunch several times a week. The only difference between us is our [management] styles.”
Routes afforded delegates the chance to get to know Allegiant and its reclusive leader a little more.

About John Redmond
John Redmond’s career in the hospitality industry spans three decades. He most recently served as Managing Director and Chief Executive Officer of Echo Entertainment Group Ltd, a publicly traded company based in Australia. He served as President and Chief Executive Officer of MGM Grand Resorts and a Director of its parent company, MGM Mirage Inc, from 2001 to 2007.
Prior to that, he served as a Co-chief Executive Officer and a Director for MGM Grand Inc, as well as various other executive level positions with MGM Grand Inc. Before joining MGM Grand, Redmond held various senior level executive positions with Caesars World Inc.
Redmond was originally elected to Allegiant’s Board of Directors in 2007 and served until June 2013, when he resigned to assume a full-time commitment in Australia. He was once again designated to serve on the board in April 2014.