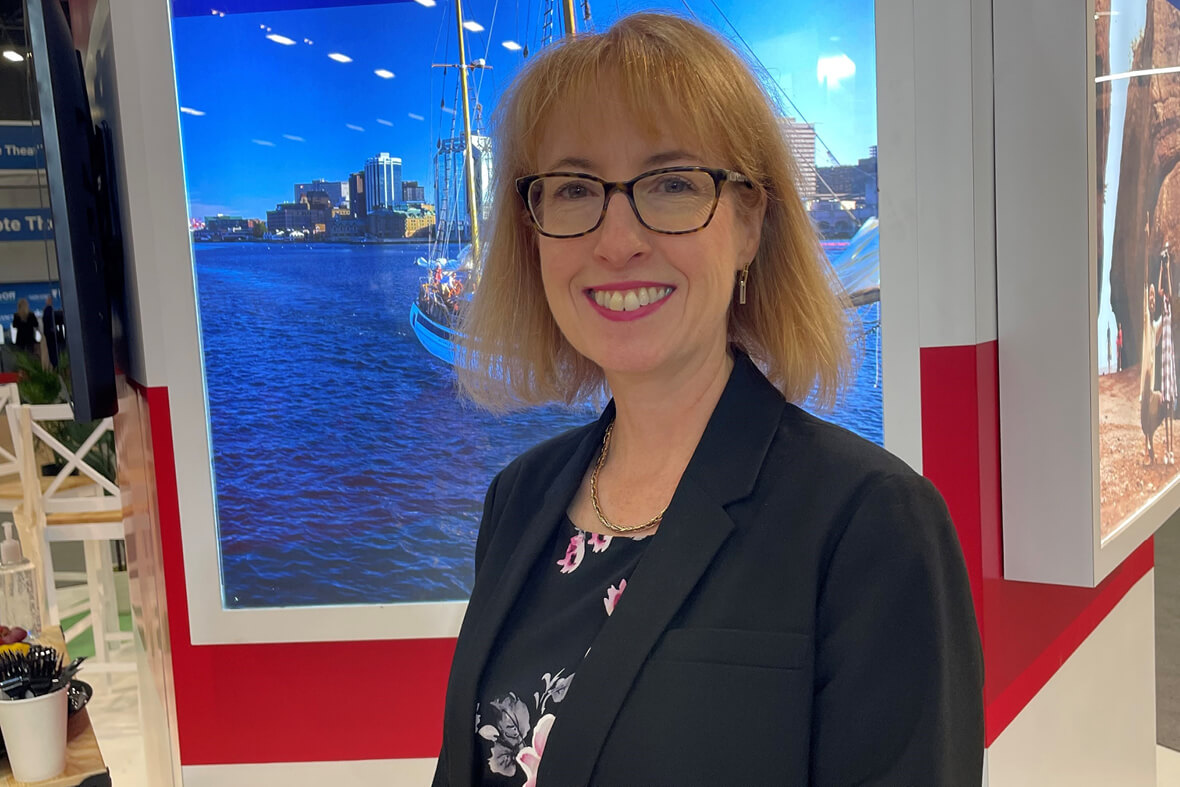 One thing the pandemic highlighted in black and white, in many corners of the globe, is the key role air transport plays in connecting communities. No more so than in Canada’s beautiful but remote east coast provinces – Nova Scotia, New Brunswick, Newfoundland and Labrador, and Prince Edward Island.
“Air service is so critically important to the development of our region,” said Marie Manning, Vice-President, Business Development and Chief Commercial Officer at Halifax Stanfield International Airport. Manning was speaking on the Atlantic Canada Airports Association (ACAA) stand at Routes, representing the 13 airports that make up the association.
All ACAA airports suffered enormous traffic declines since 2020, falling to just 5% of 2019 levels at the low point. The return of service was slow to start because of restrictive travel policies in Canada and at a provincial level. According to an ACAA statement the traffic drops “will have a substantial impact on cash flow and future financial viability of our region’s airports with a severe trickle-down effect to our respective communities”. However, significant inroads towards recovery were made this past summer.
“ACAA airports are all in competition in going after air service, but we understand that being organised and working together has many advantages,” said Manning, noting that such an approach gives those involved a collective voice at a federal level. Speaking about recovery, Manning said it has been a strong summer as pent-up travel demand has been released. Her airport, Halifax, is the largest of the ACAA members and handled 4.2 million passengers in 2019. It welcomed one million in 2021 and experienced significant recovery in 2022, forecasting close to 3 million passengers this year. However, it will be 2025 before there is a return to peak year passenger volumes, she noted.
The pandemic caused Air Canada to drastically trim its regional network and WestJet said that it will withdraw its turboprop aircraft from the region as it reworks its strategy. “During Covid we lost a lot of regional routes and connectivity,” she said.
ACAA members are fighting back, telling the story of a region with unique touristic attributes and a genuine economic growth story. This story is aided by a population increase across the ACAA region, with the number of residents in Nova Scotia surpassing 1 million for the first time this year. “One of the positive things is that people who had moved away realised Atlantic Canada is a good place to live and it is where they want to be,” she explained.
The development of a clean energy industry in Atlantic Canada, which has for years been a prominent oil and gas producing region, is a major plus point, said Manning. In Nova Scotia alone, there are plans for five onshore wind turbine projects and near-future offshore wind farms with a view to manufacturing green hydrogen and generating thousands of jobs. This drive will have a positive impact on investment, employment, and travel demand.
There are air service opportunities for domestic, trans-border and European leisure routes from the ACAA region, Manning added. Western Europe is only six or seven hours away by air, making links to the UK, Ireland, and other destinations in the region important to secure.
Halifax saw the arrival of Eurowings Discover in the summer with a Frankfurt service while Air Canada resumed its daily London Heathrow link flown with a Boeing 737 Max. WestJet operated summer services to Dublin, Glasgow, Gatwick and Paris.
A slew of major events that are sure to boost traveller numbers are coming to Canada in the next couple of years, including the World Junior Ice Hockey Championships in Edmonton, Alberta in December, the North American Indigenous Games taking place in Halifax in July 2023, and the World Acadian Congress in August 2024 (to be held in Clare and Argyle, Nova Scotia). These events will attract tens of thousands of new visitors to the region.