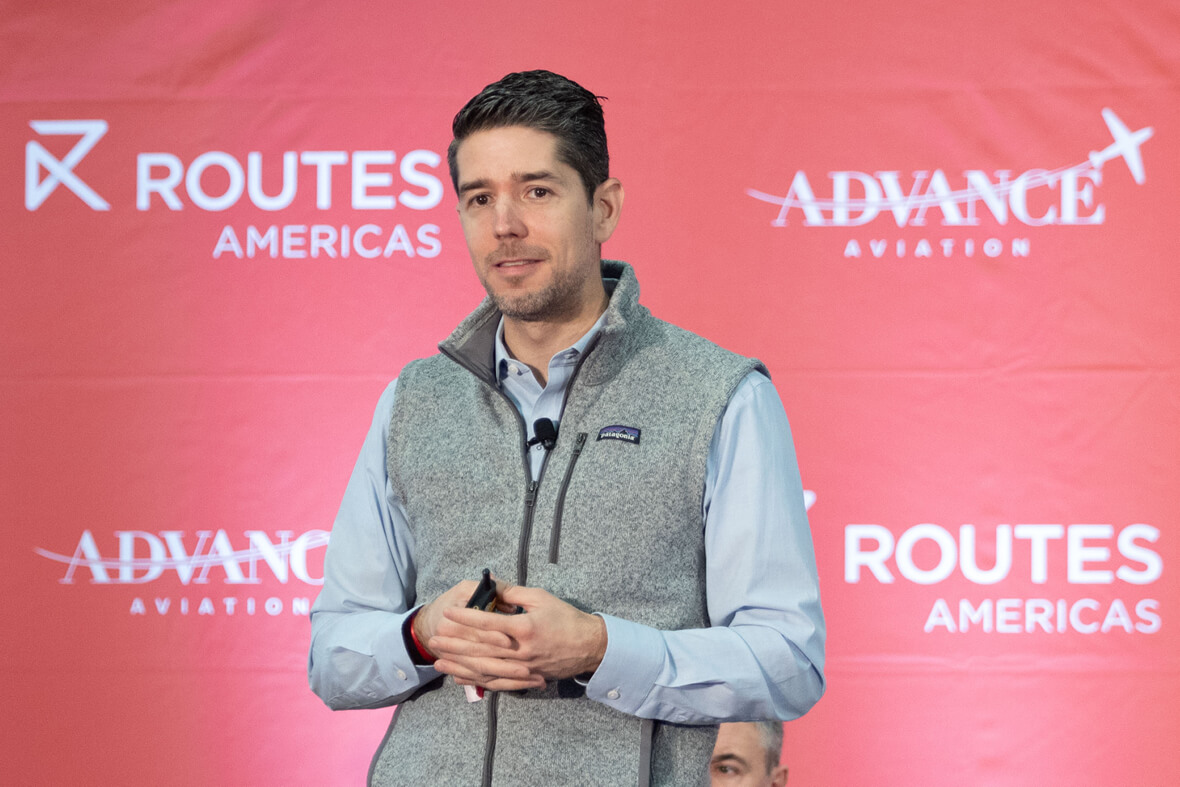 The US has been one of the markets that has recovered fastest from the ravages of the pandemic, and the industry met at Routes Americas 2022 to review progress.
(Mike Miller reports)

Masks were off and hugs were plentiful as more than 800 airlines, airports and consultants convened in San Antonio, Texas for Routes Americas 2022 in February. There were more than 2,500 airline-airport meetings, the second most of any Routes Americas event. San Antonio impressed attendees by offering a constant stream of local culture, food, whiskey, and hospitality to the largest air service development event in the Americas.
San Antonio previewed its third terminal now under construction and revealed that it has more international seats than any medium-sized hub airport in the US. While industry leaders spoke frequently about the ongoing recovery in aviation, several speakers highlighted black clouds still present in the Americas – a somewhat negative outlook that came even before Russia invaded Ukraine a week later.
“There are all sorts of issues we’re facing,” said ASM managing director David Stroud. “It is a recovery, but is it a good recovery?” IATA regional vice-president Americas Peter Cerda noted that 2022 will be a better year, “but we will have to be flexible and a return to 2019 numbers will not be good enough.
“In 2019, many Latin American carriers were losing money, and now there are a lot of new governments coming in,” Cerda continued. “Are the governments going to see aviation as good for the economy or a source of new tax revenue?”
Rafael Echevarne, director general of ACI Latin America & Caribbean, believes the industry “is going faster in the recovery than we expected, but there are dark clouds in the governments right now,” referring to potential new taxes and fees. Shane Downey, vice-president government relations for the Global Business Travel Association (GBTA), was more optimistic. “Those headwinds are not in your face now. We’re seeing countries re-opening. Corporate travel policies are changing,” he said.
“There’s a lot of pent-up demand for international travel. Going forward, airlines will be more flexible to taking risks,” said Downey. “Technology will play a role, as new efficient aircraft will allow secondary cities to see new service, better connections and hub bypass opportunities.”

Latin American dark clouds
The outlook for Latin America is far more uncertain now than during any recent period. While the US domestic airline market has been in full recovery for several months, Latin America has seen three major airlines – LATAM, Avianca and Aeromexico – all endure the bankruptcy process during the last two years. That is not the biggest worry among leaders, however.
“The biggest challenge is Latin American governments leaning left – Colombia could be next – with more authoritarian regimes being voted in,” said Cerda, a long-time Latin American aviation expert. “Governments can’t continue to over-regulate and over-tax aviation,” he said. “It’s really an important issue if we want the region to be successful. If not, this region [Latin America] will not be able to compete with other regions.”
Cerda cited several cases of new taxation that is hampering Latin American aviation recovery, including the tiny Caribbean island of St Maarten, which introduced a US$35 fee for Covid-19 testing and now wants “to make it permanent, to milk it”, he said. Argentina also has tax hikes, “and lots of flights have not returned there”.
Cerda noted that 6,000 city-pair connections have not yet restarted in the Americas. “We are going to have to convey better messaging to governments to show we are part of the solution,” he declared, noting that past approaches to regulatory authorities likely will not work going forward.
ALTA head of fuel and user charges Jaime Escobar-Corradine said that despite regulatory hurdles there are reasons to see progress in the region. New aircraft are being delivered regularly in Latin America, maintenance facilities are fully booked for all of 2022 and 2023, and there are six new airlines starting. “Brazil, Mexico and Colombia are reaching pre-pandemic levels,” he said. “We need to lower intra-regional fees and fuel taxes to stimulate the region.”
Mexico is the lone bright spot in Latin America. The country took a hands-off approach to managing the travel downturn and airline traffic has rebounded to 92% of 2019 levels as of December 2021, while the US market reached only 84%.

VivaAerobus: good times ahead
VivaAerobus has bucked Latin America’s downward trend like a stubborn mule, to use a San Antonio phrase. Routes Americas keynote speaker Carlos Zuazua, the airline’s chief executive, outlined VivaAerobus’ 164% international capacity growth – all during the pandemic.
“It should be surprising because in Mexico, six airlines received zero government subsidy, while US airlines received $49.5 billion in aid,” said Zuazua. With 55 Airbus A320 family aircraft after 15 years in business, VivaAerobus added 30 new routes in 2021, 19 of which were new international flights. The airline has before-tax margins “in the high 30% range”, said Zuazua.
During December 2021, VivaAerobus and fellow low-cost carrier Allegiant, based in Las Vegas, unveiled a new and unique low-cost-carrier alliance that will yield a significant number of new flights between the US and Mexico. “There’s a great market opportunity for medium and small destinations [in the US] to get to Mexico without going through a big hub,” said Zuazua. The 31 million passengers between the two countries are heavily weighted southbound, with US travellers seeking out the sunny beaches of Mexico.
Wei Jin, director of network planning for Mexico’s Volaris, said his carrier had shrunk to just 12% of its 2019 capacity. Volaris has now built up its schedule to 98% of 2019 levels, he said, boosted by US passengers coming to Mexico. Volaris has also been hampered by the safety downgrade of Mexico by US regulators. “There’s been a vacuum in the Mexico market,” he said, since Volaris and others stopped their growth during May 2019.

Norse Atlantic launch
Norse Atlantic Airways is expected to have announced its first transatlantic destinations imminently from its base in Oslo, Norway. While the airline’s application cites New York Stewart field north of New York City, as well as Ontario International Airport near Los Angeles, it is not fixed on secondary airports.
“We will be launching in Q2. We are focused on long-haul point-to-point flying and we will start in a cautious manner,” said Norse chief executive Bjorn Tore Larsen. “I’m a born pessimist; you have to be cautious. We might have a cost advantage and stimulate the market, but I’ve seen so many airlines lose money across the Atlantic.”
The airline will focus on alternative airports. “We’re looking for secondary airports who can offer better deals than the big airports,” Larsen said.
Unlike defunct Norwegian Air, which used many of the same Boeing 787s to operate from Scandinavia and London to the US, Norse does not expect to follow the same structure. Larsen has described the airline as “European-American”, with all of Europe and the US as its market. The airline will fly to/from Paris at some point after Oslo, and will add European cities as well.
Majority owner Larsen is the co-founder of OSM Aviation that provided flight crews to Norwegian. Bjorn Kjos, former Norwegian Air CEO, is also a shareholder in Norse.

The new Atlantic battleground
Flights are being added by all airlines on both sides of the Atlantic, and the new wrinkle in the always-competitive market is that airlines are exploring new non-stop services to smaller markets.
“New fleet types will open secondary transatlantic markets this year,” said Aer Lingus director network planning Chris Keen. “Airbus A321s will be driving several of them.” He added: “Ireland is well-situated [geographically] and we know this is a leisure-led recovery. We are seeing positive signs in business travel as well.”
Virgin Atlantic, which took admittedly “drastic steps” during the pandemic, is relaunching transatlantic as well, according to Virgin’s vice-president networks and alliances Rikke Christensen. “We flew cargo-only flights for a while, and flew to Pakistan and India. But recently we began Nassau and St Lucia flights from the UK, and are starting US destinations now. The key question is business class recovery and which industries will see demand return,” Christensen said.
“We expect demand to be consistently strong” across the Atlantic, noted American’s director international planning Henning Greiser. “We will have 14 Europe destinations from 10 US gateways.” American is also launching new services from New York JFK to Doha, Qatar, and returning to Barcelona, Venice, and Lisbon.
“The one thing that makes me optimistic about transatlantic travel is last summer’s actions,” Greiser said. “Greece was open and passengers went there. The most open markets will get the passengers.”
London-Austin, Texas is a new secondary market route for Virgin. “We can do sexy destinations, and not just island destinations,” Christensen said with a smile. Virgin has a new codeshare with LATAM and Virgin expects “a lot of pent-up demand in Latin America,” she said.
United is adding back transatlantic flights to former destinations including Lisbon, Madrid and Milan, and the airline will also explore new secondary cities such as Bergen, Norway; Edinburgh, Scotland; Naples, Italy; Shannon, Ireland; Amman, Jordan; Tenerife and Palma de Mallorca in Spain; as well as Ponta Delgada in the Azores.

Pilot shortage
After nearly 6,000 mainline pilots in the US either retired or left the industry during the two-year Covid-19 pandemic, the ability to replace them has been difficult. The effect on small-city air service is increasingly devastating as airlines cut cities from their network because regional airlines no longer have pilots to fly the routes.
In early March, United announced that it was cutting an additional 17 regional routes, after cutting 20 routes in January. Big airlines ‘cannibalizing’ the pilots from smaller airlines is again the reason, according to airlines and consultants who spoke to ARGS. Southwest Airlines pilots’ association said the eight largest US airlines are expected to hire 8,000 jet pilots during 2022. Others believe that number may be even higher.
A study by aviation consulting firm Swelbar-Zhong Consultancy revealed that US airlines operated a stunning 43% fewer regional flights in March 2022 than in the same 2019 period.
Most US airlines have raided the coffers of their regional airline partners, and other small carriers. This has led the largest regional in the US, SkyWest Airlines, to shrink its 2022 scheduled capacity 10-15% this year. Moves by SkyWest, which operates regional jets for Alaska Airlines, Delta Air Lines, American and United, caused Delta to declare during a recent earnings call that it would lower its regional capacity by more than 20%. United also has ended regional service to a dozen small cities.
“With our 540 aircraft on order, those pilots are coming from the regional space,” said United Airlines’ Mark Weithofer, director of domestic network plannings. “By the end of 2023, pilot hiring could be the size of every regional airline pilot in the US.”
As bigger carriers siphon more pilots from regional airlines – including targeting their competing airline’s regionals – routes maps are expected to shrink during the next two years as pilot hirings by Delta, American, United, Southwest, Spirit and Frontier and FedEx continue unabated.