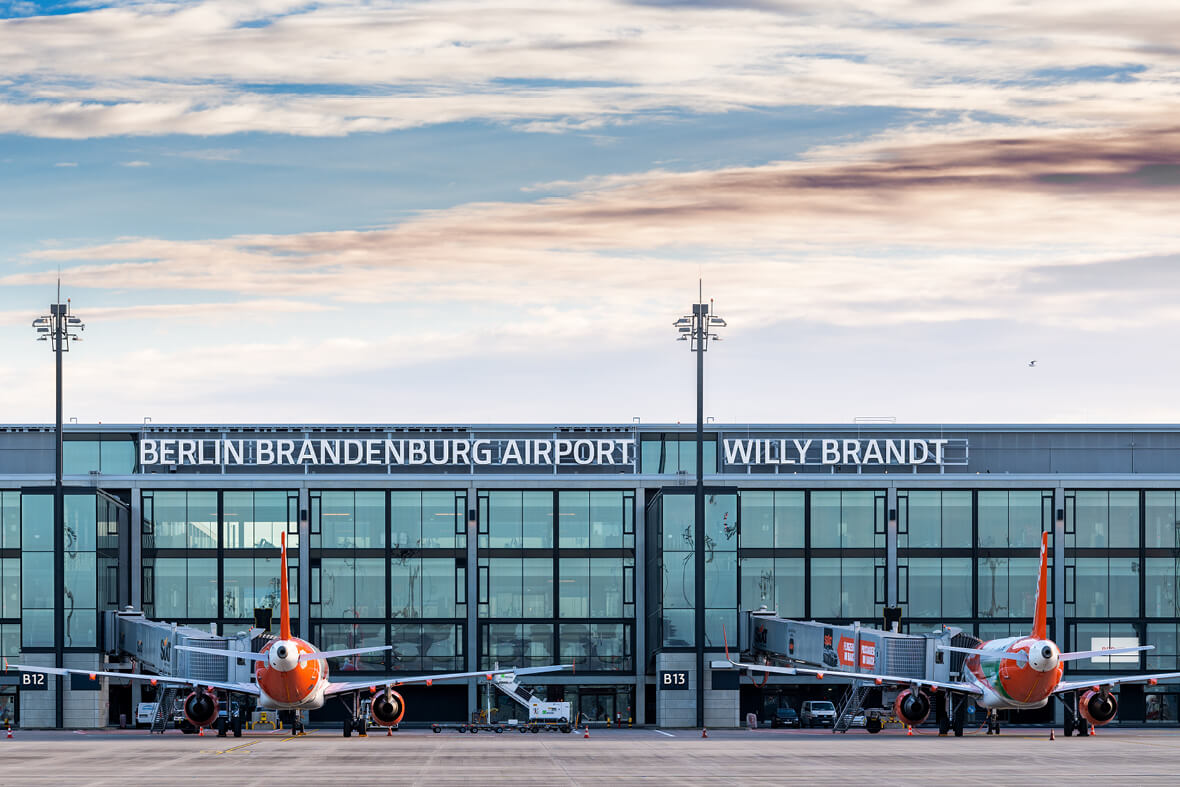 Berlin Brandenburg Airport BER Terminal 1 opened on 31 October 2020 and the operation of the new aviation site for Germany´s capital region was functional from day one. But due to a new Covid-19 lock down right after the inauguration the number of passengers handled could not reach the level planned.

Furthermore, the low passenger numbers led to the fact that Terminal 2, which was also ready for operation, was not opened and Terminal 5 (the former Schönefeld Airport) was temporarily closed this year in February. When traffic volumes increase these additional terminals can be opened step-by-step to guarantee enough capacity to operate all requested flights. The train station underneath the main terminal allows comfortable travel to and from the airport by regional and intercity trains.

When the summer holidays started this year, Covid-19 restrictions were eased, and more passengers got the chance to use the new airport to reach their destination for the first time. Traffic has significantly improved although is still far from the 2019 level. By July around 50,000 passengers daily were using the airport, about 40-45% of the pre-Covid-19 numbers. By the end of 2021 passenger numbers are expected to reach 50% of the previous level.

Currently, the focus is on European routes, where travelling is easier. New airlines including Sky Alps (Bolzano) and PLAY (Reykjavik) have already started to add BER to their network. easyJet, Ryanair and Eurowings are step-by-step bringing back more destinations and increasing their frequencies. Completely new destinations like Southampton, Thira, Tivat or Zakinthos have been or will be added to the destinations from BER.

Apart from Qatar Airways, all long-haul services came to a complete halt. Scoot became the first long-haul carrier to restart services at BER with the resumption of its Singapore route in August. This brings hope for many more to follow and to grow a worldwide long-haul network from Germany’s capital airport.

To make flying safer and to bring back traveller confidence BER early on introduced many safety and hygiene measures. From the start, social distancing signage, regular announcements and sanitizers throughout the terminal have been installed. Two testing centres opened in the terminal offering all tests needed, including fast PCR tests.

The relevant information for travellers can be found on the BER website and it keeps passengers informed through regular mailings as well as on social media. In December 2020 BER received two important certificates for strict compliance with hygiene measures during the pandemic. BER was the first German airport to receive the Airport Health Accreditation from Airports Council International (ACI). Shortly before, BER was also the first German airport to be certified by Deutsches Hygienezertifikat.

Airlines have also suffered during the pandemic and BER supports them by offering different packages for new destinations or for long-haul services. In addition, local marketing activities make sure that airlines get the support needed in the region. A close co-operation with the destination marketing companies promotes the region as an incoming destination worldwide.

Despite the difficult times, the economy in the capital region of Germany is not suffering as much as the German average. New investments including the Giga factory by Tesla, which will open shortly, and other major companies like Siemens believe in the Berlin/Brandenburg region and are opening new offices. Regional businesses, especially in the tech and e-commerce sector such as Delivery Hero, Hello Fresh, N26, Zalando and many more, are booming and growing.

While tourism, which is a very important part of the region’s economy, has been down, hotels are now opening back up in line with restrictions and slowly the city and region’s cultural life is returning, and Berlin will host visitors from all over the world again. Nearly 14 million visitors came to Berlin in 2019, a figure to be reached again very soon making it again the most visited city in Germany and number three in Europe.

Looking ahead BER is ready for passengers to come back offering the modern infrastructure and a product that passenger enjoy. The airport is well positioned to serve the capital region of Germany and offers the services needed by the airlines that operate.