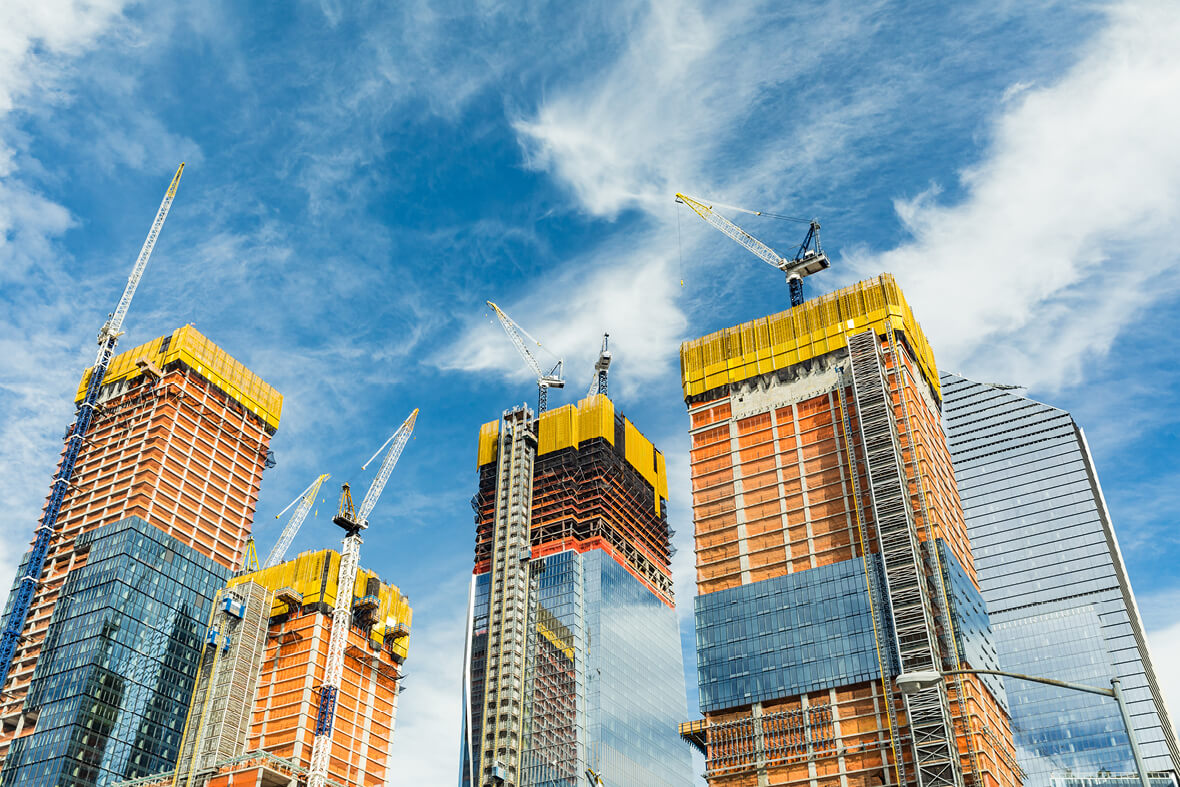 US airports could see an infrastructure boost thanks to a new government $2 trillion investment package, but some have already been using the reduced passenger numbers seen during the Covid-19 pandemic to push ahead with their own projects

At the time of writing at the beginning of June, the vaccination programme in the US continues to perform strongly, with 139 million, 42.3 per cent, of the population having received two jabs.

The successful roll-out has largely been achieved under President Joe Biden’s watch after he made it a key focus following his inauguration in January this year.
Now, following his announcement that the US government is making available about $2 trillion for improving the country’s infrastructure and shifting towards greener energy over the next eight years, it seems Biden is also looking to give the US economy another shot in the arm.

The plan was announced in March and must have caught the attention of everyone working in the aviation sector and who are keen to see US airports receive a boost.

But what does such a large sum mean and how will it be shared out? Of the $2 trillion on offer, a total of $621 billion will be spent on roads, bridges, public transit, rail, ports, waterways, airports and electric vehicles.
Allocated sums include $115 billion to modernise 20,000 miles of road with another $20 billion set aside for road safety improvements. A further $80 billion has been allocated to address the repair backlog which has built up at rail operator Amtrak, as well as modernise the Northeast Corridor train line running north from the capital Washington DC to Boston.
When these sums are taken into consideration, it suddenly makes the $25 billion allocated to US airports seem a lot less generous, especially since that is only $8 billion more than has been allocated to inland waterways, ports and ferries.

Regardless of how the money compares to that allocated to other sectors, it has been welcomed by Airports Council International–North America (ACI-NA) which has long been calling for more support for airports which have been hit hard by the pandemic.

“We are encouraged the president and his administration are following through on his campaign pledge to improve infrastructure funding for airports. This plan would help the industry continue to focus on safe and efficient air travel by supporting terminal renovations and multimodal connections that would provide affordable access for passengers and workers.

“Investments in aviation infrastructure are more vital than ever before. The Covid-19 pandemic decimated airport finances around the country as passenger traffic dropped dramatically. On top of that, airport infrastructure has long been underfunded, creating a backlog of $115 billion worth of necessary projects.

“As we taxi towards brighter days ahead America’s airports are ready to take off. These much-needed funds will help US airports build back and create jobs that will support a vibrant 21st century economy.”

Burke says the extent of the damage Covid-19 has wrought on the aviation industry, which supports $1.4 trillion in annual US economic output and 11.5 million jobs annually, has been profound.

He adds a report recently released by ACI-NA addressing the country’s urgent need for investment in the aviation sector shows that airport finances have been devastated as passenger numbers fell by up to 96 per cent in 2020 compared to 2019.

Worse yet, passenger traffic numbers aren’t projected to return to pre-pandemic levels until 2023 at the earliest, meaning airports face at least another two years of pain with billions of dollars more in lost revenues.

However, the report adds even before Covid-19 closed the skies airports were suffering from chronic underfunding, meaning any money available was spent on immediate needs like maintenance of the current systems and structures rather than on long-term plans.

This has led to the creation of a $115 billion backlog in planned and much-needed larger projects to fully modernise facilities as well as create extra capacity.

“There are also tens of billions of dollars in additional projects that have been delayed or cancelled due to the pandemic and economic recession,” the report says.

Long-term funding failure
However, the report states while the pandemic may have caused the most immediate pain, it adds problems date back to 20 years ago and the failure by the US government to modernise a key funding mechanism for airports.

It says the Passenger Facility Charge (PFC), which is a fee levied on passenger tickets with the money raised supposed to be invested in airports, was last raised 20 years ago from $3 to $4.50.

During the same period, the report adds, construction and other related costs have continued to rise; meaning the value of the PFC has fallen by 40 per cent.

And it is this discrepancy that must be put right as the report argues that the PFC is the best way to fund infrastructure, as it responds to both local circumstances and the travelling trends at different airports.

It adds that airports should be able to set the charges according to local demand while it is also the fairest way to pay for any improvements as it is the passengers using the airports that pay directly for them.
The report also argues that making the PFC more flexible could even drive down ticket prices, as extra capacity fuels competition between airlines while much of the money raised would go back into the local community thanks to the ensuing employment of the local workforce.

“Airports are a community’s gateway to the world, and they can be its gateway to growth as well,” the report says. “Funding infrastructure the right way will inject money into local economies and help all of America keep up with our constantly changing, increasingly interconnected world.”

Airports continue to build
Regardless of when the money arrives or where it comes from, airports in the US have been pushing ahead with their own developments, with some saying they have benefitted from the reduced passenger numbers seen during the pandemic by speeding up their own projects.

One such facility is New York’s LaGuardia Airport, where work on Delta Air Lines’ new terminal has progressed so quickly that the new arrivals and departures hall, the new road network and the second concourse will now open to customers next spring.

A further half of the third concourse is expected to open in the summer while the entire four-concourse terminal is expected to be fully complete by the end of 2024, eighteen months earlier than originally planned.

NY Corporate Real Estate managing director Ryan Marzullo says: “We have been able to take advantage of the downturn in passenger volume and flight activity to capture additional real estate and advance our LGA construction more quickly, as we have at most of our hub airport projects across the country.

“Our priority when we’re constructing these new terminal facilities is to protect our operation, our customers and our employees, while building as efficiently and quickly as possible.”

John F Kennedy International Airport is also set for expansion after Delta recently agreed to revised plans with the Port Authority of New York & New Jersey and JFK International Air Terminal, the operator of JFK Terminal 4, to expand it and consolidate Delta’s operations there.

Further south, Tampa International Airport has also been taking advantage of the downturn in passengers and last year announced it was making quicker headway than planned on four projects, including eight new express curbside lanes for passengers without checked luggage, a nine-storey office building, a modern central utility plant and a critical roadway expansion project.

Vice president of planning and development Jeff Siddle says: “We know passengers will come back and these projects are critical to providing a top-notch experience for all our guests. We are happy to use this slow period to complete some construction projects that would be extremely impactful.”

Hartsfield-Jackson Atlanta International Airport is also preparing for an influx of passengers, with many travellers expected to return to the skies in time for the summer, albeit mainly on domestic routes.

In May the airport opened part of the new ATL West parking deck, which created 2,250 additional parking spaces in anticipation of returning passengers.

Once fully opened in the summer, the seven-storey, automated car park will have more than 5,000 spaces with customers then accessing the airport’s domestic terminal via the SkyTrain.

But perhaps travellers returning to the skies for the first time since the Covid-19 pandemic got a global grip in March last year will be most impressed by work undertaken at Los Angeles International Airport.

Work began on the project in 2017 and has been overseen by Southwest Airlines, which had signed a ground lease for the land between Terminal 1 and Terminal 2 and which is now home to the 283,000-square-foot extension connecting the two.

Los Angeles World Airports (LAWA) will then buy back the facility from the airline which will use the new facility alongside Viva Aerobus, Sun Country Airlines, Allegiant Air and Frontier Airlines.

Speaking at the opening ceremony, Southwest Airlines chairman and CEO Gary Kelly says: “As the largest airline in California carrying more travellers to, from, and within the state going on two decades, this world-class facility opens the door for continued growth and access to our growing network – especially to Hawaii.

“I applaud the city of Los Angeles for their vision to invest in critical infrastructure and being good partners to bring this world-class facility to life.”

Now it remains to be seen whether Biden’s promised federal funding makes the same impact, whenever it appears.