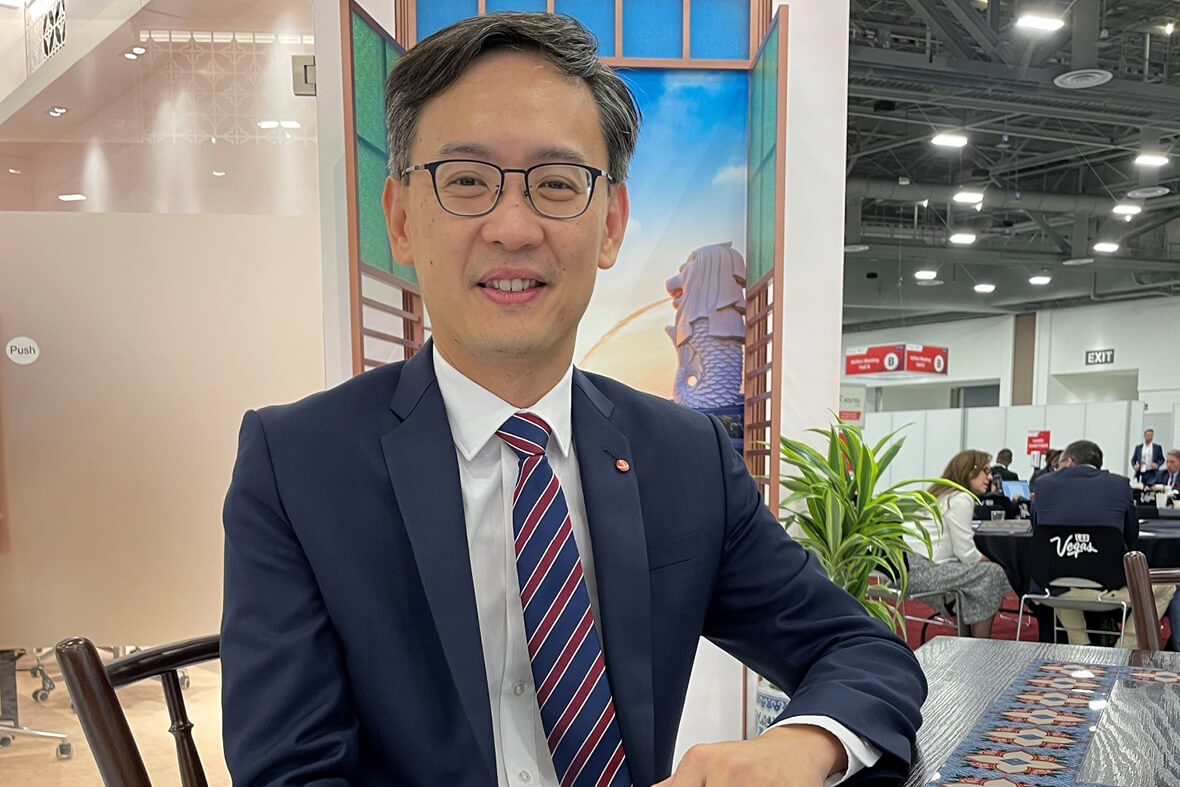 “We are happy with today’s growth trajectory and can see light at the end of the tunnel,” Lim Ching Kiat, Managing Director Air Hub Development of Changi Airport Group, told ARGS at Routes.
Along with most Asia-Pacific hubs, Singapore Changi has faced a traffic collapse since it posted a record number of 68 million passengers handled in 2019. In that year, the airport was connected to 173 cities in 52 countries/territories via 92 airlines from across the world.
Then Covid hit, and 2020 was a dismal year. In the second half of 2021 there was some optimism around government-backed vaccinated travel lanes, but these came into effect late in the year and just three million passengers passed through Changi during 2021.
“From April 2022 we have seen a big jump [in traffic],” said Lim, now that travel restrictions are virtually a thing of the past. By year-end, Changi is forecasting to hit 70% of its 2019 traffic level with a full return by 2024. At the time of Routes, the airport counted 132 destinations in 48 countries and 89 airlines in operation.
One of the major impacts of Covid is a change in ranking of Changi’s top markets. Pre-Covid, Indonesia was the largest market served from Changi, with China second, followed by Malaysia, Australia and Thailand. This has switched to now read: Australia, Malaysia, India, Indonesia and Thailand.
“Australia is now our top market. Traffic with India is shaping up nicely, China/Hong Kong has disappeared, and Japan has dropped,” said Lim. “The US market has got stronger overall and we will see how much that is sustained beyond Covid.”
Changi is seeking to rebuild its network across the globe, although China will remain closed for some time. The airport was linked with 36 destinations in China pre-Covid, and it will be that country’s economic development that dictates how the market will restart, said Lim. “The question is, will it be back to normal? We are heartened by early indicators, via a survey of Chinese travel sentiment, that Singapore comes up as the number one safe city in the minds of Chinese consumers.”
While China’s recovery is an unknown, Lim said that parts of Changi’s pre-Covid strategy remain unchanged. “We want to grow links to secondary cities across south-east Asia, for example in Vietnam. The near term is quite positive,” he said.
The success of India is another positive with the addition of a route to the city of Pune becoming Changi’s 16th destination in that country. Capacity to Australia is already close to pre-Covid levels as that market recovers strongly.
The return of European cities is progressing, with Singapore Airlines reopening Stockholm and LOT Polish Airlines restoring its Warsaw flight. “European yields and loads are good, so we think there are opportunities for more routes, frequencies and aircraft up-gauging,” said Lim.
Traffic between Singapore and the USA has surged past 2019 levels with new connections now active to Seattle and Vancouver, which were unserved previously, he added. There are opportunities to the east of North America too, he believes, with no carriers flying to Washington DC, Chicago, Toronto or Boston at present.
During Covid, Changi took the opportunity to speed up the expansion of Terminal 2 with its southern wing reopening in October. Terminal 4, where operations were suspended in May 2020, reopened in September. Together the opening of these terminals took Changi’s passenger capacity to 70 million per annum.
For the longer term, Singapore has announced that plans to build Terminal 5 are back on track after being paused during the pandemic. This will be a massive terminal with a capacity of 50 million passengers annually and could be in operation by the mid-2030s.