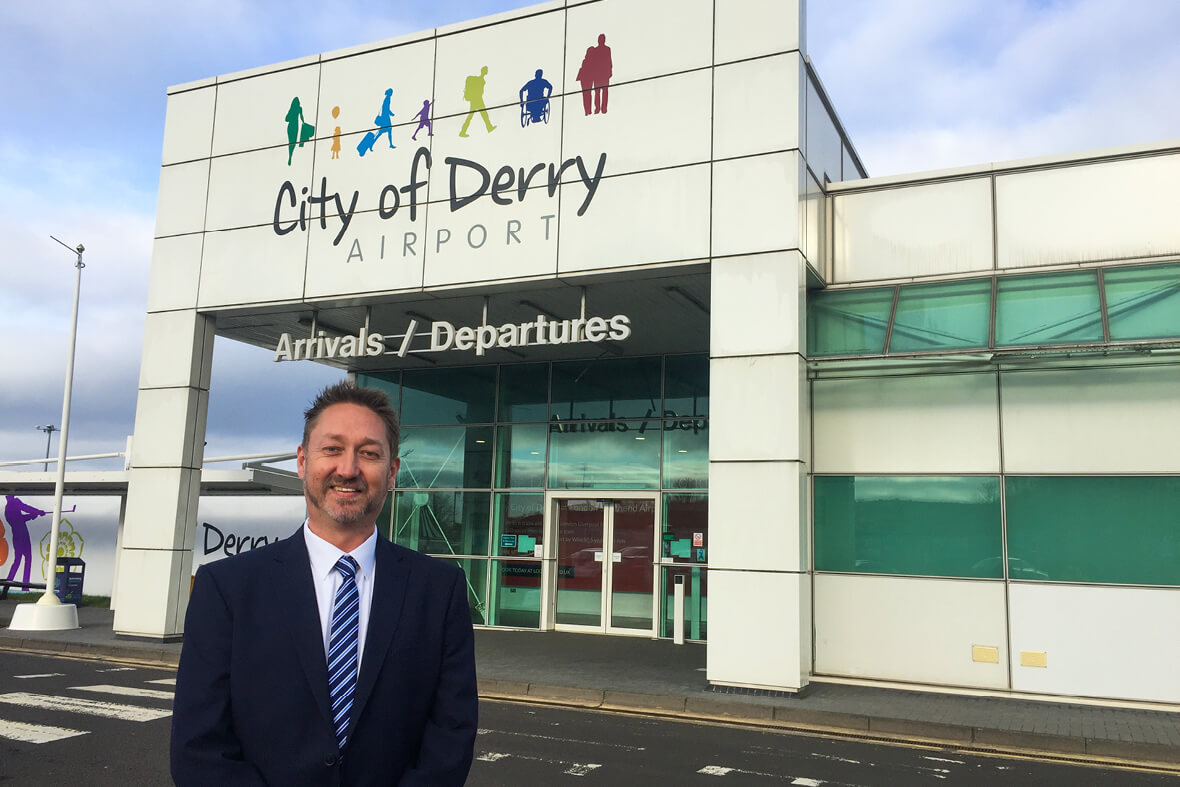 CODA – the rhythmic acronym of City of Derry Airport – is playing a strong role in reviving travel, both leisure and business, in its gateway role for the Northwest of Ireland.

According to Managing Director Steve Frazer: “Our market has been remarkably strong in the Northwest region of Northern Ireland (NI). For example, the London route is already back to 2019 levels for this summer. Liverpool has accelerated to a daily service driven by demand and for the summer will be nine times a week, with Glasgow now performing well at a higher frequency despite a slower start due to slower removal of restrictions.”

And Frazer believes this positive trend will continue. “My expectation is for a strong summer of UK and Ireland domestic travel. Across Northern Ireland, from late September, it will become more of a challenge for operators to continue the routes which have been viable due to the UK & I staycation market and NIDAKS scheme (the NI Domestic Aviation Kickstart Scheme, a £4.5 million initiative to support air connectivity between Northern Ireland and Great Britain). The Halloween and winter holiday traffic may keep some continuity on stronger routes before a levelling out by Spring 2022, by which time the emerging size of post-pandemic business traffic should start to become clear.”

“At CODA we remain committed to improving international hub access via London, Dublin, Manchester and a mainland European hub,” he explains. “We are confident that the government(s) commitments to air connectivity via Dublin will begin to move at pace post summer. Airlines do remain risk averse with many picking off the low hanging fruit often associated with the larger airports nearer the larger populous. However, some are starting to see the changes in attitude with people often preferring to fly local rather than allow an additional two hours each way, often in shared transport, making CODA an interesting prospect, currently uncontested with a ‘doorstep’ potential of 1.5 million journeys a year.”

Amid the carnage reaped on air service by the pandemic, there are some success stories. “Our twice daily London service with Loganair is busier than it has ever been, at one point during the pandemic it was one of only two services from NI in total, reinforcing the need for connectivity from the Northwest region. Loganair have been fantastic partners in their commitment to the Northwest of NI picking up our Liverpool route to a daily frequency and increasing Glasgow services to most days of the week.”

According to Frazer: “For the post-pandemic recovery period, our key targets (Dublin, Manchester, Birmingham), along with resumption of an Edinburgh service, are being discussed with airlines as they look to a time when they will widen their networks; certainly, any reductions in UK Air Passenger Duty (APD) will accelerate these opportunities. For next year, we have already agreed at least two summer sun destinations (to be announced soon) and expect to add a European city break destination or two to our offerings.”
The airport has adopted a suite of Covid-19 protection measures. “As well as the mandatory masks indoors, social distancing while standing and seated (assisted with many Perspex barriers at interaction points and between seats), we have temperature scanning cameras on entry to the airport and before entering security to pick up on anyone with a fever,” explains Frazer. “At any point in the airport, you should be within sight of a touchless sanitiser dispenser and clearly see floor and seat markings to assist with distancing.”

CODA has clearly played a critical role during the pandemic. “Firstly, our continued connectivity while all others were stopping told a story of many people in the Northwest of NI who have a genuine need to travel, as well as highlighting our bespoke island geography,” says Frazer. “At the point of essential travel only we had doctors, nurses, carers and key construction workers coming from not only the Northwest but much further afield. When we moved from essential only to a need-based guidance, it become abundantly clear just how many people in the Northwest work in Great Britain and rely on air transport to commute and conduct business.”

“As we have moved on, it has been reinforced that NI has three commercial airports and the Northwest needs standalone good air connectivity. In previous years, the needs of our region may not have been fully realised with many assuming that a flight to Belfast ticked the box for everyone in NI, regardless of the additional hours travel time on our limited road and rail network,” he says.

“Our interaction with airlines as they plan post-pandemic recovery has increased with greater interest in our Northwest catchment, who is travelling and why. It may take a little time and patience but I’m sure our connectivity will grow to match our regional ambitions and addressing the current imbalance,” adds Frazer.
“After a year of hunkering down and protecting our future, we aim to return to many of our local community support initiatives including school children visits,” explains Frazer. “On a wider aspect, work has begun on fully offsetting our airports carbon output (Scopes 1 and 2) by 2022, at present we are seeking a local opportunity which is accredited to enable that offsetting to be as close to home as possible, particularly given that a recent report has stated NI has the lowest per capita levels of forestation in the UK.”

“As restrictions ease, we also look forward to renewing our unique relationship with our Donegal neighbours who form a large part of the wider Northwest catchment area we serve,” says Frazer. “And finally, CODA fully intends to be at the heart of a fitting tribute next year to mark the 90th Anniversary of honorary ‘Derry Girl’, Amelia Earhart’s historic solo Atlantic crossing.”