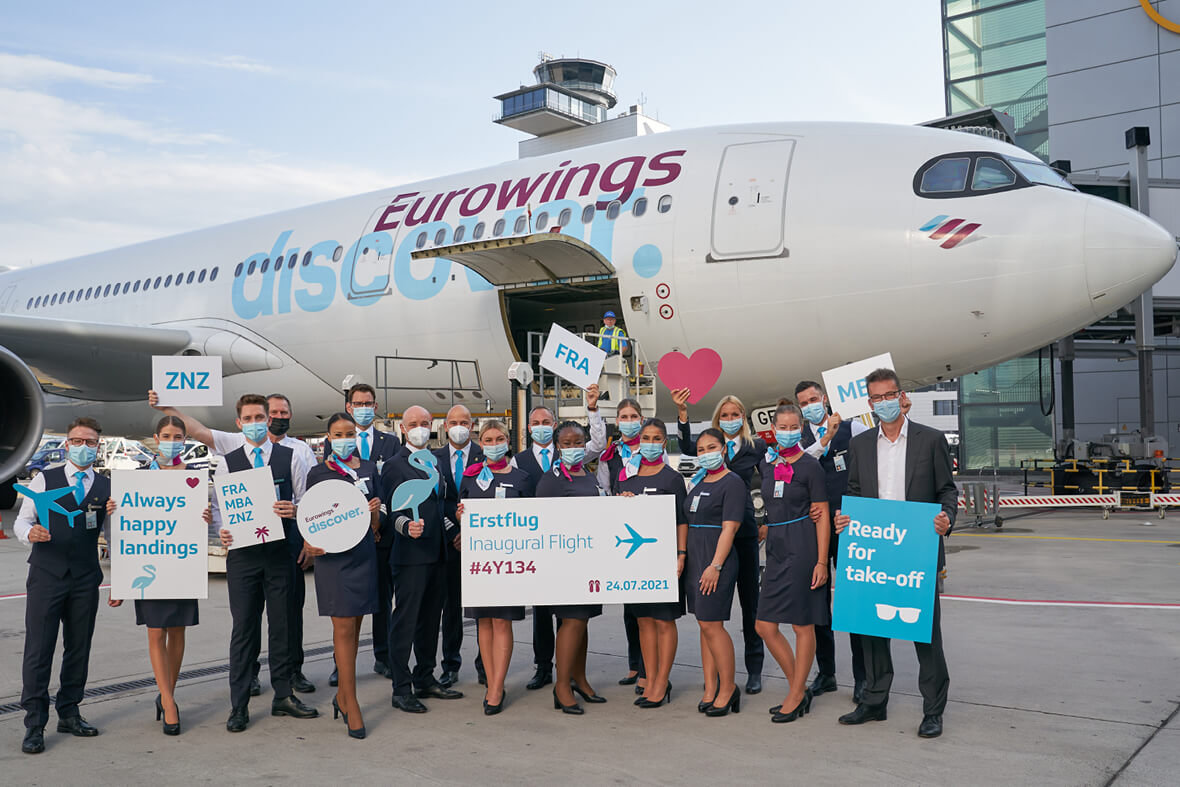 Eurowings Discover, Lufthansa’s latest attempt to tap into Germany’s huge outbound tourist market, was in full ‘come-and-get-us’ mode at World Routes in Milan. The carrier, which only began operations on 24 July 2021, was a must-have on the meeting agenda at the event for airports from all geographies that have attractive vacation opportunities.
The Eurowings Discover project was started in 2020, and is a “new touristic airline”, explained Marco Goetz, chief revenue officer, at a Routes Airline Briefing. It is wholly owned by parent Lufthansa Group and closely linked with many elements of the mothership such as ticketing, the loyalty programme and connectivity with Lufthansa’s network, including codeshares with Swiss and Austrian Airlines.
The big difference is that Eurowings Discover will focus entirely on the tourism market with predominantly long-haul services, initially from hubs at Frankfurt and Munich. “We want to be the first choice when it comes to vacations,” said Goetz. There are options to book via the airline’s web channels and it will also work directly with tour operators. The first route was Frankfurt to Mombasa, Kenya.
The differentiation between Lufthansa and Eurowings Discover will be clear, with the start-up adding a tourism product to the Lufthansa Group that will not compete at all with the mainline carrier, said Rupert Kraus, director network and airport relations at Eurowings Discover. The aim is to be a big player in the markets that it chooses to enter, he said.
The original Eurowings-branded airline will continue and focus on European point-to-point routes, but Lufthansa’s aim is to capitalise on the brand, adding Discover to the name to emphasise its spirit as a tourism product.
Over the winter, Eurowings Discover will add destinations in the Caribbean and its first service to the USA will be to Tampa International in mid-December, said Goetz. More services to US cities will follow over the coming year – and the airline was at Routes “looking for opportunities for new destinations” to expand its network rapidly as the fleet plan is finalised for 2022 and into 2023.
It is seeking destinations with something “special” to offer and its first wave of routes will be year-round services to places such as Mauritius, Las Vegas, Windhoek (Namibia) and Punta Cana in the Dominican Republic, said Kraus. Through Eurowings Discover, the Lufthansa portfolio will gain secondary destinations that would not have made economic sense for the parent carrier.
Initially, Eurowings Discover will look for routes that work in their own right without relying on any feed from the Lufthansa network, said Kraus. As the airline builds and matures, the network effect will enable it to look at secondary destinations.
There is also an emphasis on encouraging destinations to collaborate on projects to help optimise a service and share some of the risk in starting a route with joint marketing activities, said Goetz.
According to Goetz, the carrier’s ramp-up will see it operating nine aircraft this winter, consisting of six Airbus A330-200s and three A320s; the total will grow to 11 by summer 2022. Initially the A330s will operate in a two-class configuration, with economy and business offered, but from the second quarter next year Eurowings Discover will add a 17-seat premium economy section with seats identical to those used by Lufthansa, said Kraus.
This winter, short-haul services from Germany to popular winter destinations like the Canary Islands, Morocco and Egypt will begin with the A320s.
“It’s an ambitious and fast ramp-up,” Goetz told delegates. And Eurowings Discovery is a welcome arrival for airports and destinations desperate for the return of airlines and travellers.