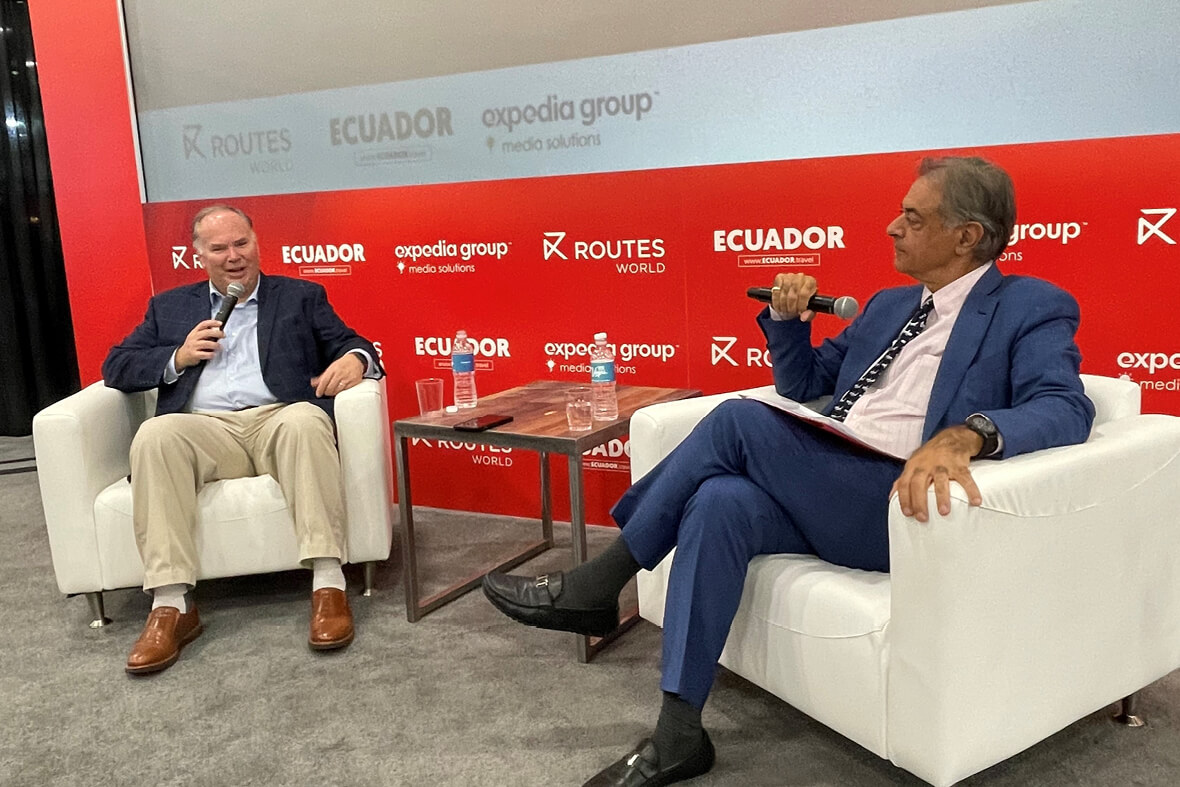 Frontier Airlines is going it alone after a move to merge with Spirit Airlines was hijacked by JetBlue Airways. Chief Executive Barry Biffle was at Routes to outline its independent future. Mark Pilling reports.

Barry Biffle describes the Spirit Airlines-JetBlue Airways merger as “an interesting commercial experiment”. The words of the Frontier Airlines chief executive, which are rarely minced, are laced with sarcasm when discussing the latest mega-merger of US airlines.
Speaking with Michael Bell of executive search firm Korn Ferry on the Routes spotlight stage, Biffle, who has led Frontier for eight years, is an entertaining watch. His point is that the documents that explain the Spirit-JetBlue merger outline a plan to take the low-cost Spirit brand and raise costs – essentially, up to JetBlue levels. “The bottom line is they are going to have to raise prices by 50%,” said Biffle.
“I don’t know if I’d want to be that commercial officer… I wish them luck,” he continued.
In February it was Biffle’s Frontier that was in the merger hotseat, having just announced a merger between the two largest ultra-low-cost players in the USA: Frontier and Spirit. It was described at the time by Spirit Chief Executive Ted Christie as a “perfect fit”.
Then JetBlue muscled in, usurped Frontier and in July the Spirit-JetBlue merger was agreed. The Frontier strategy must now take an independent path, and Biffle is unperturbed. In fact, the increase in cost base he asserts Spirit-JetBlue will face means “we are probably the largest beneficiary” because Frontier will remain as the only ultra-low-fare carrier.
What recession?
For Frontier, the pandemic recovery is almost complete. It was at 95% aircraft utilisation in Q3 and will be back to full utilisation in Q4. When asked about recessionary worries he had this to say: “We haven’t seen a thing because we’ve already been through the biggest recession because of Covid,” he said.
The carrier has relatively little exposure to international services as they only made up 5% of its capacity pre-pandemic, he noted. This percentage will grow to 15% over time as it expands its network in the coming three to five years. “There is a lot more to do,” he said, with destinations in the Caribbean of interest as well as more expansion into Mexico.
When the carrier begins taking delivery of 240-seat Airbus A321XLRs in 2026 (it has a total of 18 on order), it will be able to bring new destinations into its network for the long-range narrowbody. European cities are on the radar, confirms Biffle, joking that long-time friend Declan Power, head of aviation development at Shannon Airport in Ireland, had asked him about Frontier’s A321XLR making a stop at his airport.
Biffle visited the Airbus factory in Toulouse recently and saw how the A321XLR can serve “pretty much most of northern Europe” from the north-east of the USA. It can also reach all Latin American destinations from Miami, fly non-stop from the West Coast of the USA to the Caribbean and Central America, and perform US transcontinental flights. “It enables you to go full density with a lot of seats for further,” he said.
Frontier took delivery of its first A321neo in October, one of 158 of the type coming between 2022 and 2029. The carrier has 226 aircraft in total on order, which will nearly triple its fleet size by the end of the decade.
Asked what Frontier’s criteria are for considering an airport, Biffle replied that the minimum frequency is a once-a-week service to a leisure destination or a Caribbean route. However, since Frontier’s smallest aircraft is the 186-seat A320, “if a route is less than three times a week, we do not normally look at it”. He added: “A 100-plus passengers a day type route is what we look at.”
With Frontier’s low fares and costs, Biffle believes his airline would be welcome at any airport. “With the cost differentials there is no fortress [we cannot enter],” he said. “If there is a high fare place where I can go I can charge half and still make money.”
Although Biffle has not seen any recessionary signs, he does of course worry about demand, fuel prices and the war in Ukraine. One problem that has receded is the delays caused at some airports when the fast capacity ramp-up caught some out.
There were issues leading up to July with some business partners that struggled, but these woes are behind Frontier now. “Since mid-July we’ve been fully staffed everywhere. There is no more attrition problem in over 100 cities [that Frontier serves],” he said.