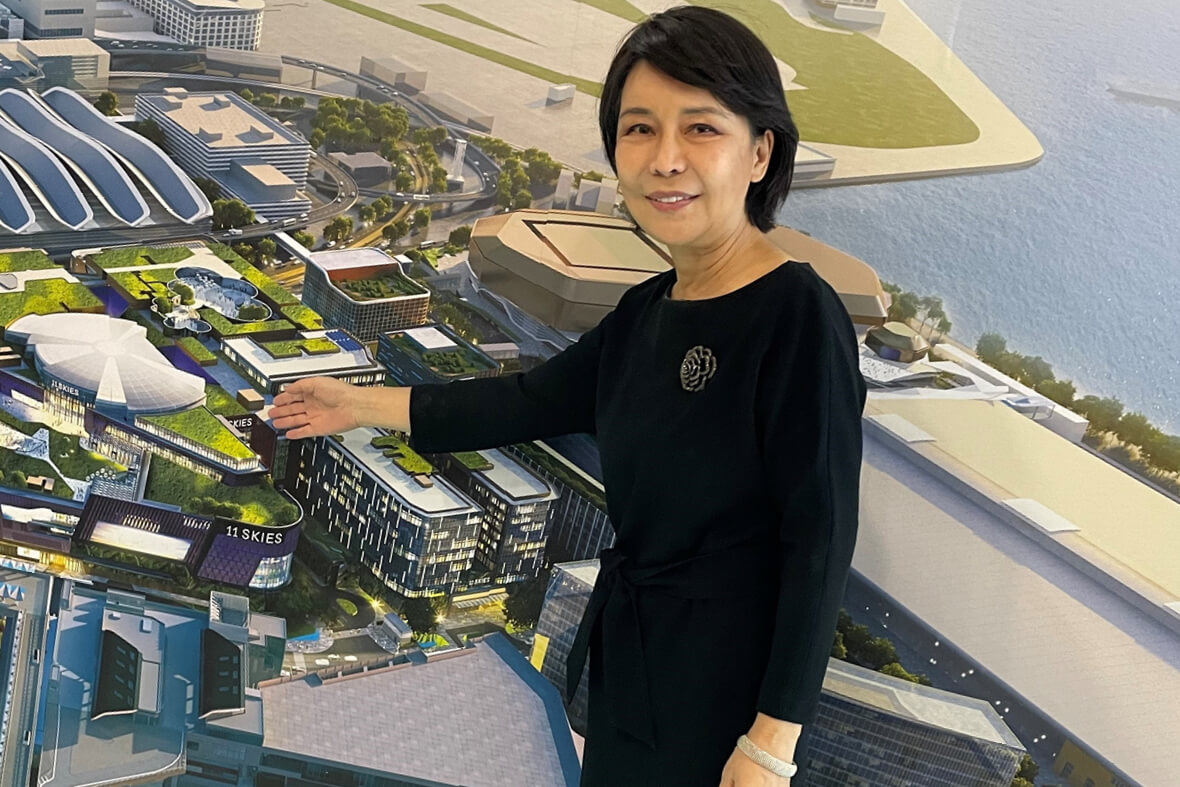 The list of infrastructure projects underway or planned at Hong Kong International Airport (HKIA) is impressive. There is a third runway under construction, the Airport City project to transform HKIA into a destination, and a significant investment in creating multimodal connections.
“Many airports put projects on hold [when the pandemic hit]. We decided otherwise: we knew traffic would come back,” Vivian Cheung, executive director airport operations at HKIA, told ARGS in Las Vegas. HKIA was at Routes determined to showcase the inherent strength of Hong Kong as a market and to underline its ambitious investment plans to grow as a hub and as a business and leisure destination.
The airport’s management team certainly had some serious thinking to do. Hong Kong has been hit harder and longer than most gateways when it comes to severely depressed traffic because of the pandemic. With its umbilical connection to China and the heavily restrictive travel regime there, Hong Kong has suffered badly.
In September, traffic at HKIA only reached 15% of the throughput recorded during the same month in 2019, and while recovery is beginning, total traffic is forecast to climb to just 30% of 2019 levels by the end of this year, said Cheung. The one bright spot is cargo, which has been resilient. “The pandemic did not stop cargo,” she noted. In fact, volumes rose above pre-Covid levels, with 5 million tonnes handled in 2021.
In 2019, HKIA saw a record 73 million passengers pass through its terminals. For the first nine months of 2022 it handled just 2.2 million. However, the Hong Kong government has begun to ease travel restrictions, giving HKIA confidence that traffic will surge back.
At the end of September, Hong Kong’s Special Administrative Region lifted compulsory quarantine requirements for arrivals. A PCR test on arrival is still mandatory, but passengers do not need to wait for results at the airport. They do, however, need to avoid populated areas such as restaurants for three days. The airport welcomes the government’s decision to relax the quarantine arrangements and is hopeful the final restrictions will be lifted as soon as possible, perhaps by year-end.
The change in policy sees the airport and airlines restarting operations and rebuilding networks as demand returns. At the time of Routes, Cathay Pacific Airways had restored about 50% of its capacity. “In 2019 we had some 220 destinations. Today we serve 150,” said Cheung.
HKIA’s forecast is that its traffic will be back to about 60% of 2019 levels in 2023, reaching 90% in 2024 and back to 100% in 2025, she said. HKIA is confident of the long-term development and passenger traffic of the airport. Pre-pandemic it was a booming and profitable market. “That’s why we are coming out to tell the world what is happening in Hong Kong. Restrictions are lifted and we want [people] to come back as soon as possible,” said Cheung.
However, HKIA is not content to simply open for business and expect travellers to flood back. “We are creating some incentives – we’ve never had to do that before,” said Cheung. Business travel is expected to pick up first as the restrictions are not so important for this segment, but tourist and leisure travel will need stimulating.
Accordingly, HKIA has purchased half a million round trip tickets from Hong Kong, as well as cars, diamonds and hotel vouchers, for use in a huge “Lucky Draw”, said Cheung. There will be a huge promotional campaign for these giveaways and prizes to encourage travel.
HKIA is seeking to be an efficient waypoint for Chinese travellers from the mainland, which remains more restrictive. “There is an opportunity for us to provide that, with people able to use Hong Kong as the hub to connect to the world from China,” explained Cheung. China is Hong Kong’s largest market with a quarter of its routes in 2019 related to mainland connections.
As it recovers, HKIA will once again face capacity issues. The airport, which opened in 1998, was facing such issues by 2016 and a three-runway system was in development. It is on schedule to open the third runway in 2024. This will give it the ability to handle its projected volume of 120 million passengers and 10 million tonnes of cargo annually by 2035.
The Airport City strategy is to “expand the functionality” of HKIA, turbo charging its role as a growth engine for Hong Kong and the Guangdong-Hong Kong-Macao Greater Bay Area (GBA), a region in south China made up of 11 cities with a combined population of over 86 million. Pre-Covid HKIA provided some 75,000 jobs in and around the airport, a number forecast to grow to 135,000 when the Airport City is finished.
In addition to developing HKIA’s core passenger and cargo services, the strategy features the SKYCITY project to deliver Hong Kong’s largest retail, dining and entertainment complex around the airport. This includes the construction of a 20,000-seat arena and convention centre and a marina. It is scheduled to start coming into operation from 2027.
In terms of multimodal connections, passengers can today take ferries from nine points in the GBA area to SkyPier at HKIA to transfer to flights without having to go through immigration procedures, and vice versa. GBA travellers coming to HKIA by road have been able to use the Hong Kong-Zhuhai-Macao Bridge that connects HKIA and the GBA area directly since 2018.