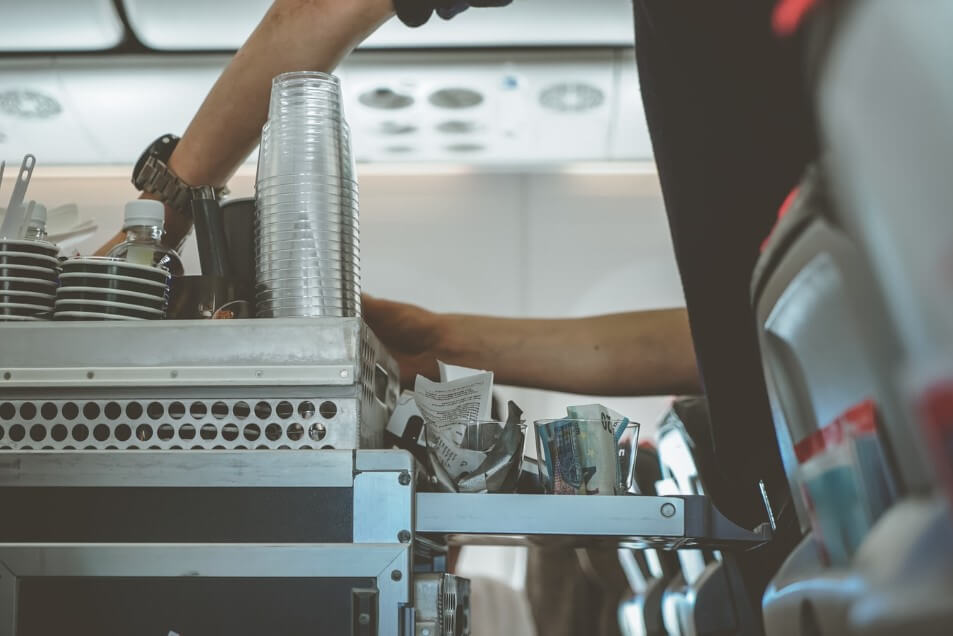 Airline caterers’ understanding of best practice to prevent incidents of food-related illness among passengers has changed over the years but the need for constant vigilance remains as vital as ever, as Andrea Tolu discovers

In an article published in 1945 in Coronet magazine, Sky Chef’s founder and airline catering pioneer Newt Wilson explains that what prompted him to completely revamp in-flight menus was how the time between preparation and serving affected quality.

On some trips, [air meals] must stay in their containers for several hours,” reports the writer.

In Wilson’s revised menu, stuffed peppers are only cooked for five minutes so they will not get mushy, and steaks are served medium or well done to preserve the heat. Some foods should not be served to airline passengers at all. Omelettes, for example, would lose their shape and fish would be too smelly.

What the article does not mention is that, if stuffed peppers are left in a container for several hours, they may also become unsafe to eat.

The omission is understandable. Knowledge about microbiological hazards in food was very limited in the 1940s. Indeed, it would be more than 15 years before the US National Aeronautics and Space Administration – NASA – developed its systematic food safety approach, now known as HACCP (Hazard Analysis And Critical Control Points).

Thanks to HACCP, food safety practices have definitely improved. Serving food on aircarft, however, remains quite a logistical feat.

Control is crucial
The airline industry has its own adaptation of HACCP, developed by the International Flight Services Association (IFSA). Other than hygiene practices, one of the tenets of these guidelines is temperature control
.
“What makes or breaks food is at what temperature it’s been held and for how long,” says flying crews food safety trainer Jean Dible. “The temperature danger zone is between 5º C and 57º C. Four hours in that range and it will be completely unsafe to eat.”

Any place where food is produced can be vulnerable to contamination. In-flight menus, however, come with extra challenges.

Airline catering kitchens prepare high quantities of ready-to-eat meals that need to be assembled. For example, explains Dible, kitchen staff could spread out enough bread on tables to make 25-30 sandwiches at one time, and then put luncheon meat, sliced tomatoes, lettuce and cheese on all of them.

“During all this time, those sandwiches would remain at room temperature,” Dible says. “The problem is, kitchens are warm, so food would be already picking up bacteria.”

After it is assembled and packaged, food is sent from the kitchen to the aircraft. Just as in Newt Wilson’s times, this step can be accomplished fast and without incidents – or riddled with unpredictable stops and delays. Although catering trucks today are much better equipped than ever before, food may still be exposed to dangerous temperatures during this journey.

Once they arrive at their destination, meals should be immediately put in galleys that keep it warm or cold until it is served. However, Dible says, “not all aircraft are equal. Brand-new models have better galleys, but some of the old ones still in use have no way to keep that food cold or hot. It comes in on carts and stays there until it’s served.”

The last link of this logistic chain is the hands of flight attendants serving food to passengers. By their very nature, aircraft are places with a high concentration of people and objects where bacteria could spread quickly, so personal hygiene is one of the prerequisites of HACCP.

Reporting
Despite these many critical points, reported incidents of airline food-related illness are few and far between.
This is thanks to controls by food safety authorities and catering companies, and the effective application of HACCP measures. However, it also has to do with the typical challenges of collecting data about food-borne outbreaks and tracing their origin.

Luckily, most food-borne illnesses only produce mild symptoms, like diarrhoea or vomiting; they are often unreported. For those that are reported, the incubation period puts food safety authorities at a disadvantage. It can take up to 72 hours for Salmonella, four days for E. coli and 70 days for Listeria to result in any symptoms. By that time, patients will have eaten many different types of food in different places, making the exact cause of the illness difficult to identify.

Pinpointing an outbreak to its ground zero requires an approach akin to police investigation. Detectives may have to fingerprint the pathogen’s DNA to verify that the offender is the same in each case, and then find out whether victims ate the same product and brand, or dined at the same restaurant, or on the same flight.

And while supermarkets and restaurants tend to serve customers in relatively small areas, airline passengers go in all sorts of different directions once they leave the plane, Dible points out.

Risk
Although the number of incidents is low, the risk of contamination for in-flight food is always present. The purpose of controls and procedures is to reduce that risk to the lowest level possible. In cases where pathogens can find a favourable environment in which to multiply, these procedures must be particularly accurate.

In IFSA’s guidelines the group of high-risk foods includes fruits and vegetables that are eaten raw, as they may be contaminated right from the time they are harvested.

The worst offenders are sliced tomatoes, freshly-cut melon, leafy salad greens, and any type of bean sprouts, says Dible. “People tend to think that they’re safe, but they can be dangerous if they’re not kept very cold. Once they’re cut, there’s a chance for bacteria to get inside.”

The other high-risk group includes all foods made from meat, fish, milk and eggs. These need constant temperature control before and after they are cooked or processed.

Sushi is under special surveillance, as both of its main ingredients are high-risk: “If you eat contaminated seafood, you can become very sick very fast, within an hour or less. The same goes for rice, which can harbour a toxic bacterium called Bacillus Cereus,” Dible observes.

At the lowest end of the risk spectrum are foods that do not require temperature control at all, such as bread, sweets, pastries or canned foods.

Ultimately: “The safest kind of food to eat aboard an aircraft,” says Dible, “is food that has been cooked and is still served hot. If it’s not, that’s a red flag, because it has probably fallen into the temperature danger zone.”