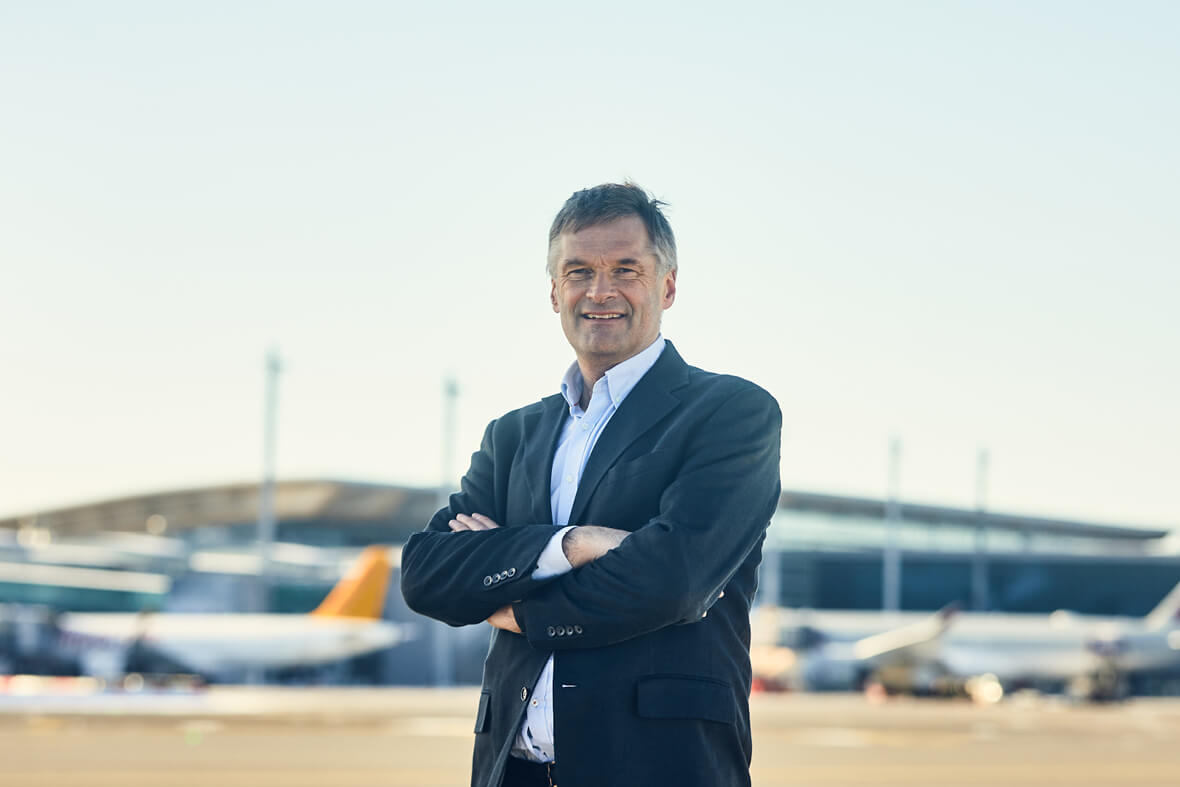 Abraham Foss, the chief executive of Norway’s airport and air navigation services operator Avinor, talks to Mark Pilling about the challenges of restoring the fortunes of this large and diverse group.

With a CV that spans 20 years in industries as diverse as telecommunications, construction, and modern digital technologies, and containing duty time in cities like Oslo, Kuala Lumpur, and Washington DC, it is hardly surprising to hear that Abraham Foss was not remotely intimidated by the carnage he faced when arriving in the aviation business for the first time in 2021.
“It was busy,” he says with typical Scandinavian understatement. “Obviously, a lot of things were unstable. However, the fundamental operation was running as it should be, with activities conducted as contracted, on a smooth, regular basis.”
Foss began working as chief executive of Avinor in February 2021. Avinor is a wholly-owned, state limited company under the Norwegian Ministry of Transport and Communications responsible for 43 state-owned airports. A great deal of these airports service remote communities in this Nordic country with its elongated coastline and numerous islands. Its border is predominantly with Sweden, but it also has a land border in the north with Finland and Russia.
The bulk of Avinor’s traffic, about half, is concentrated on capital Oslo and the company, which has some 2,800 employees, is also responsible for the operation of Norway’s air navigation service.
“The big thing about handling the pandemic is a practical one in handling all of the changes,” says Foss, referring to the constantly shifting travel and health rules and requirements as the spread of the virus ebbed and flowed and states sought to contain it. “We estimate there have been close to 200 different rule changes over this period.”
For Foss, it is expected that managing these changes is just part and parcel of what a professional airport and air service provider should do. But the massive traffic losses as a result have played havoc with Avinor’s balance sheet. “Financially it’s a catastrophe. It is very, very, bad for us,” he says. This is a frank admission, but the numbers do not lie. In 2019, Avinor’s total revenues were NOK 11,785 million ($1.33 billion) for the entire group with a net profit of NOK 702 million ($79 million). For 2020, this fell back to revenues of NOK 8,183 million ($926 million) and a swing to a net loss of NOK 724 million ($82 million). In 2021 the financial picture will be similar.
When Foss joined Avinor the modus operandi, as it was for most, was working from home. “This was kind of hard for me,” he says. The standard on-boarding for a new chief sees them meeting new colleagues face-to-face as early as possible. “When you get into a new industry and considering the geographic spread of the operation this was important, but of course we had to do a lot of Teams meetings.”
Foss will begin visiting the extensive Avinor eco-system this year having the quality conversations and interactions that personal meetings stimulate. “I need to get out there and get the feel of the people and of the business,” he notes.

Opening up
This year will be the one where it will be “about opening the world again,” says Foss. “This industry has a lot of rewarding challenges, both long and short-term.” As 2021 went on, Avinor was seeing a promising period towards the last part of the year as the virus threat appeared to wane. This was driven by carriers offering point-to-point services on vacation routes. However, the surge of the Omicron variant stopped the recovery in its tracks and will lead to a poor first quarter of 2022, he says.
Prior to the onset of the pandemic Avinor was seeing decent traffic growth at its airports with a compound annual growth rate of 3.6% in the 2010-2019 period. In 2019, Avinor’s systemwide passenger numbers had reached 54 million. This crashed by 63% to 20 million in 2020 and recovered only slightly to 22.4 million in 2021.
After two years of remote working, it is hard to judge whether this practice will sustain. “Although we believe there is a lot of underlying demand, there will be segments of the market where the influence on travel on a more permanent basis will occur,” says Foss.
He sees traffic beginning to recover again in the second quarter and the hope is that the summer will be strong. The growth curve for this year will be steeper than predicted. “Our forecast rationale is that we believe in the underlying need and desire of the tourist segment to fly. This will significantly pick up as supply increases and when the market is not so uncertain,” says Foss. However, it will take until late 2024 for Avinor’s overall traffic volumes to reach 2019 levels.
The growth focus will be on Oslo, which was the hardest hit of Avinor’s airports by the pandemic because of its larger proportion of international traffic. Main hub Oslo, which had seen peak traffic numbers grow to 28.5 million in 2019, fell back to 9 million passengers in 2020 and logged 9.3 million last year. The domestic airport system was less exposed and suffered less, says Foss.
“The first phase and an important part of the story for Avinor and for Norway is connections to the main hubs in Europe, and that is lagging all over the place,” says Foss. Travel restrictions across the continent have meant swathing cuts to inter-hub service over the past two years, and they are only just being restored. These links will be re-connected over the coming weeks and months, followed by routes to the USA and then Asia, says Foss.
However, Avinor is studying what size and shape the industry will take as the recovery takes hold. It is not certain it will naturally assume the form it took prior to 2020. “It will be interesting to see how low-cost carriers and the whole airline industry will change or is impacted by Covid,” says Foss.
“With our role in Norwegian society and with a starting point that makes us neutral to the different airline offerings as we possibly can be, we are definitely looking at how the industry will evolve,” says Foss. “We need to understand the changes taking place – whether its point-to-point carriers, network carriers or low-cost carriers – and what that does to our offering.”
“We are looking at whether and to what extent these changes reflect in how we package our products and what our role is in all this,” says Foss. “We are asking these questions now. We need to challenge ourselves. Do we understand the pain points airlines have? Are there things we can do to lower the total cost of ownership? How to produce our services in a more efficient way?”
While this does not mean Avinor launching an airport product that is totally different from today’s, the approach from Foss to ensure the group adapts its product as the market changes will surely be welcomed by airlines, especially if they see services that are more tuned to their operational needs and there are cost benefits. On the charges front, Avinor has maintained a close dialogue with the regulatory bodies and decided to freeze them in 2022, says Foss.

Projects postponed
In normal times Avinor would be spending millions of Norwegian kroner a year on infrastructure and system upgrades, but like every other airport investments have either been postponed or put on review. During the pandemic the group has cut NOK1.3 billion ($150 million) annually from the capital project budget. “It is an on-going process. The postponement of investment is not just because of the total financial situation it is also driven by the underlying growth going forward,” says Foss.
One of the projects that has been affected by the pandemic is the proposal to build a new airport at Bodø on the northwest coast of Norway. In a press statement Foss said: “After almost two years of the pandemic, Avinor is in a serious financial situation, and there is still great financial uncertainty about the future. Therefore, it is not justifiable to assume the risk related to making a decision on the implementation of the project now.” Avinor has postponed the decision by 12 months. The new airport is estimated to cost NOK6.6 billion ($750 million) with this move the earliest the airport could enter service is the second half of 2029.

Routes Europe
Bergen, Norway’s second largest city and Avinor’s second largest airport in its system, is the host of Routes Europe 2022 from 18-20 May. Bergen is branded as the gateway to the spectacular fjords of Norway and is a UNESCO World Heritage City and a European City of Culture. The airport handled 3.2 million passengers in 2021, up from 2.65 million in 2020.
As organiser Routes says: “Routes Europe 2022 will unite decision-makers from airlines, airports, destinations and aviation stakeholders that are invested in the future of European air connectivity.” Hosting the event is timely for Avinor as it seeks to restore its fortunes, says Foss. “Being the Routes Europe host is important to demonstrate the fact that we are part of the international community, and of course we need to establish ourselves with a lot of network building,” he says.