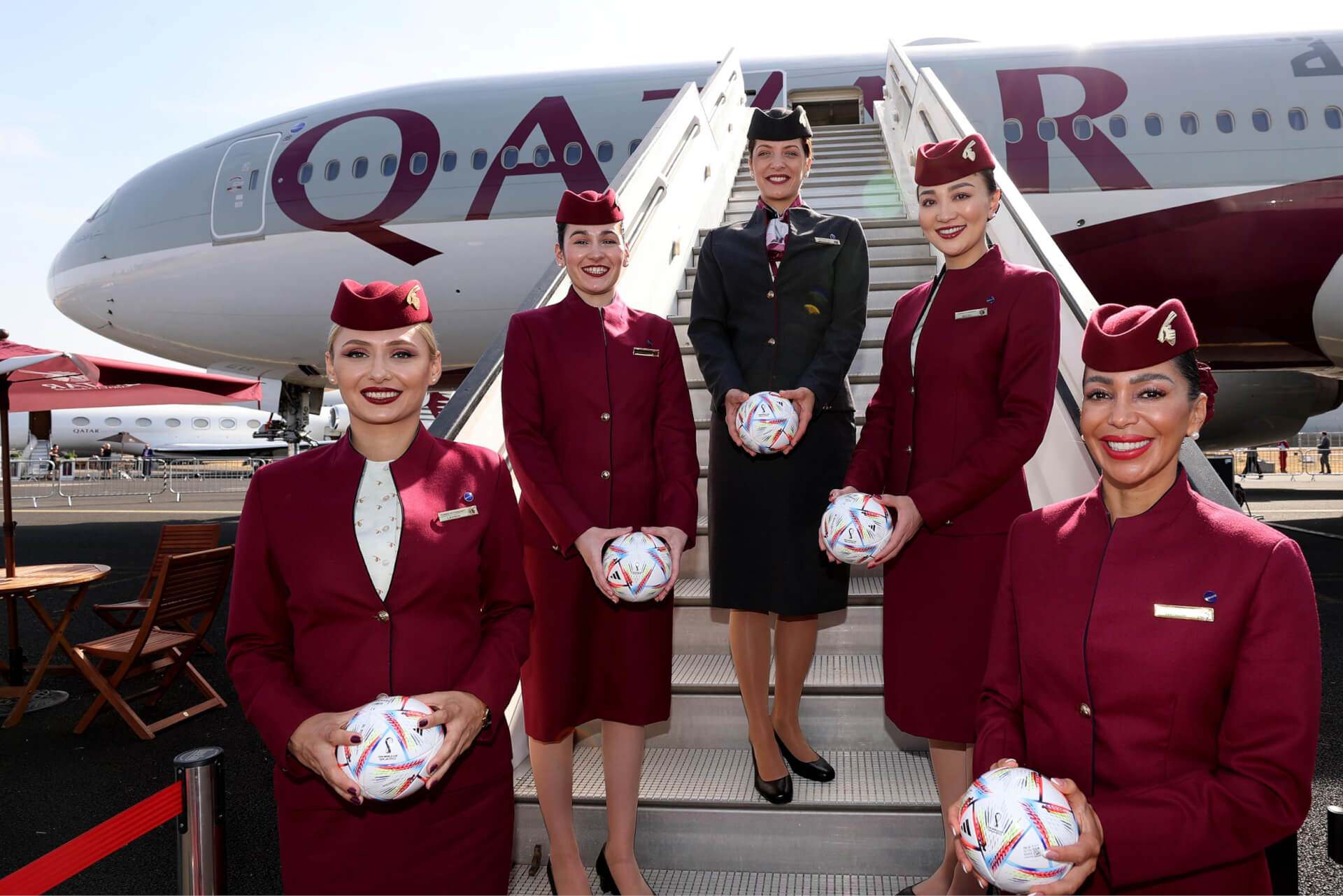 The list of achievements for Qatar Airways in 2022 makes impressive reading. In the 25th year since it was relaunched in 1997 the Doha-based carrier posted record financial results, stepped in at short notice to host the prestigious IATA Annual General Meeting and was named the ‘Airline of the Year’ for 2021 at the Skytrax World Airline Awards

And to crown it all, in November Qatar will host the globe’s premier soccer tournament, the FIFA World Cup. Naturally, Qatar Airways is FIFA’s Official Airline Partner for the event, putting a bright spotlight on this dynamic Gulf carrier. It is in fact the first time the World Cup has been hosted in the Middle East.
“This year Qatar Airways Group celebrates a quarter of a century of history since its relaunch, whilst maintaining strong performance and growing profitability,” said His Excellency Mr Akbar Al Baker, the airline’s group chief executive, speaking in mid-June as it revealed its annual results. Al Baker has been at the helm of Qatar Airways since 1997, when it only had four aircraft, and has steered the airline to a leading position on the world airline stage.
“Our commitment to providing the greatest choices to our passengers, maintaining the highest levels of safety in the industry, and earning trust have made us proudly become the airline of choice for millions of travellers around the world,” said Al Baker. “We have pursued every business opportunity and left no stone unturned as we aimed to meet our targets.”
Remarkably, in a period when many airlines were in rebuilding mode and pushing towards profitability but still some way off returning to the black, the Qatar Airways Group achieved its strongest ever financial performance. For the year to the end of March 2022, it reported a record net profit of QAR 5.6 billion (US$1.54 billion). This is a rapid turnaround from the 2020-21 financial year, which showed a net loss of QAR 14.8 billion ($4.1 billion).
Qatar’s strong performance came about because revenues from passenger and cargo services soared. Passenger revenue increased by 210% over the previous year, due to the growth of the Qatar Airways network, increase in market share and higher unit revenue, for the second financial year in a row, said the airline.
The carrier saw revenues climb to QAR 52 billion ($14.3 billion) during the 12-month period, which was higher even than pre-crisis levels in 2019. The airline carried 18.5 million passengers, an increase of 218% over the previous year.
No less impressive was the performance of Qatar Airways Cargo, which experienced revenue growth of 25% over the previous year – with cargo capacity (measured in available tonne kilometres) also up by 25%.

Network expansion
According to the airline: “These record earnings are the result of decisions made during the pandemic to expand Qatar Airways’ passenger and cargo networks, with a more accurate forecast of the global market recovery, building further customer and trade loyalty and product excellence combined with strong cost control.
“Despite the challenges of Covid-19, the national carrier of the State of Qatar grew to more than 140 destinations in 2021/22, opening new routes including Abidjan, Côte d’Ivoire; Lusaka, Zambia; Harare, Zimbabwe; Almaty, Kazakhstan; and Kano and Port Harcourt, Nigeria in addition to resuming flights to key markets across Europe, Africa, the Middle East and Asia. The company has operated continuously the largest network among all Middle Eastern airlines, as measured by number of destinations as well as weekly flights.”
Minister of State for Energy and Qatar Airways group chairman, His Excellency Mr Saad Bin Sharida Al-Kaabi, said: “Qatar Airways Group has demonstrated a robust role in the aviation industry, and these financial results are a clear indication of the Group’s strong performance.”
Qatar Airways was not only one of the first carriers to resume service to destinations as the pandemic-induced crisis subsided: in some cases it never stopped. The airline took a deliberate stance to remain flying as much as possible during Covid, earning a valuable reputation as a carrier that could be trusted as it repatriated thousands of stranded people. It still flew to 30 destinations even at the height of the pandemic.
Speaking at this year’s Arabian Travel Market, Al Baker said the pandemic had brought Qatar Airways to the attention of many. “Several million people travelled for the first time on Qatar Airways [during Covid], and this was a huge marketing benefit for us, because they saw the product,” he stated. “Today, we have established our brand as an airline that is there for its passengers… We did a lot of things to let the people know that Qatar Airways is with them in good times and in bad times.”
In addition to rebuilding its own network at pace, Qatar Airways has been busy sealing several strategic partnerships including codeshare agreements with a range of carriers to extend its reach. Deals signed this year feature South Africa’s Airlink, Malaysia Airlines, Virgin Australia and IndiGo of India.

The role of cargo
On the cargo front, Qatar Airways was able to take advantage of the huge surge in air freight during the pandemic because of its large fleet of dedicated freighters. It also converted passenger aircraft that were grounded during the pandemic to transport cargo, in order to meet the huge demand for medical supplies, equipment and food.
Qatar Airways Cargo serves a global network of more than 60 freighter destinations and 150 passenger destinations utilising freighters, bellyhold passenger flights, passenger freighters and mini-freighters. The airline’s freighter fleet includes two Boeing 747-8 freighters, two 747-400 freighters, 26 777 freighters and one Airbus A310 freighter. It also has an extensive road feeder service network.
Qatar Airways Cargo transported over 3 million tonnes of air freight in the financial year to March 2022 and secured an 8% share of the global market, it claimed. Up to that point it had transported more than 600 million doses of Covid-19 vaccines over the course of the pandemic.
While all airline CEOs are keeping a close eye on possible further disruption caused by new Covid variants, there is little doubt that global inflation, the spike in energy prices and the impact of the Russian invasion of Ukraine have fuelled uncertainty about the speed and resilience of the air travel recovery. This explains why at the industry level, Al Baker expects that demand will have rebounded to pre-Covid levels only by 2024 or 2025.

Aircraft shortages
Qatar Airways has of course bounced back much faster. In fact, its rise has been so swift that, coupled with the grounding of its 22-aircraft strong Airbus A350 fleet, the issue has been finding enough capacity to meet its network requirements.
Qatar’s aviation regulator grounded the A350s after paint degradation problems were found on the widebodies. The airline is embroiled in a court case with Airbus over the issue.
The unavailability of the A350 fleet has meant that Qatar Airways has been forced to bring its decommissioned A380s back into service to provide enough capacity. A total of eight A380s are being restored to service, with seven being used operationally and one retained as a spare.
Qatar Airways is among several carriers that have unexpectedly and somewhat reluctantly brought the A380 back into service; Lufthansa, Air France, Korean Air, Qantas and British Airways have all needed the super-jumbo to meet demand. However, this is only a temporary measure for the Doha-based airline. When Qatar Airways takes delivery of new widebodies, and capacity grows again, the A380s in its colours will once more be retired.
As for cargo capacity, Qatar Airways is planning a significant expansion of its dedicated freighter fleet. In January it placed an order for up to 50 777-8 Freighters with Boeing, becoming the launch customer for the type. The order consists of 34 firm 777-8s with another 16 on option for a total investment of $20 billion at list price.
The carrier expects to take delivery of the first 777-8 in 2027. As part of the agreement, Qatar Airways converted 20 of its 60 orders for the passenger version of the 777X to the freighter version. At the same time, it ordered two current-generation 777 Freighters to augment its cargo capacity before the 777-8s begin to arrive.
For its narrowbody fleet needs, the carrier has also turned to Boeing. At the Farnborough Air Show in July, it ordered 25 Boeing 737 Max 10 aircraft with purchase options for a further 25 of the type. Qatar Airways has ordered the Boeing jet following the cancellation by Airbus of a deal for 50 A321neos. It was not disclosed when the first 737 Max aircraft will be delivered.

Making room at Doha
The huge influx of passengers anticipated for the World Cup in November has caused Qatar Airways to make a radical change to its services. For a month around the FIFA World Cup being held in Qatar from 21 November to 18 December, it will cut back or even cancel its route network from its Hamad International Airport hub in Doha to make room for the extra traffic the football tournament will generate. Over 30 destinations will be affected.
“At this time, we are sacrificing the Qatar Airways network for a period of 30 days,” Al Baker told the closing press conference at the 78th IATA AGM. “There is such a huge rush during the FIFA [World Cup] we have to restructure entire banks of Qatar Airways services to accommodate all the other airlines that want to come,” he said. The carrier will temporarily withdraw from “many destinations” to make room for overseas airlines to use the terminal and slots.
In May, Qatar Airways announced that several Arab carriers would operate over 180 shuttle flights to Qatar during the World Cup to bring supporters from regional capitals and cities and relieve the pressure on accommodation in Doha. The services will be operated into the old Doha International Airport, which will be reopened especially for the shuttles.

Ground handling
In August the airline’s services subsidiary, Qatar Aviation Services (QAS), announced its partnership with IATA to become the first ground handler globally to join the new expansion of the IATA Environmental Assessment Programme (IEnvA) for ground service providers.
The IEnvA programme provides a framework for achieving environmental sustainability across all ground operations. It is an environmental management system initially offered to airlines that demonstrate equivalency to ISO 14001, the 2015 environmental management systems standard. It provides a structured approach to managing the environment, as well as reporting and mitigating environmental impacts. As a result, organisations are able to more formally incorporate sustainability and environmental compliance strategies into their operations.
Although its home base in Doha has avoided the operational disruptions seen on the ground at airports in Europe and the USA, Qatar Airways has been negatively affected in these regions. So much so at its London Heathrow operation that at the Farnborough Air Show in July Al Baker said the carrier is revisiting a plan to create its own handler at this airport.
For Qatar Airways 2022 will undoubtedly be viewed as a flagship year. The World Cup showcase for the state of Qatar and the prominent role of its flag carrier will put both firmly on the map and in the minds of travellers visiting this tiny nation or flying on the airline to other destinations.