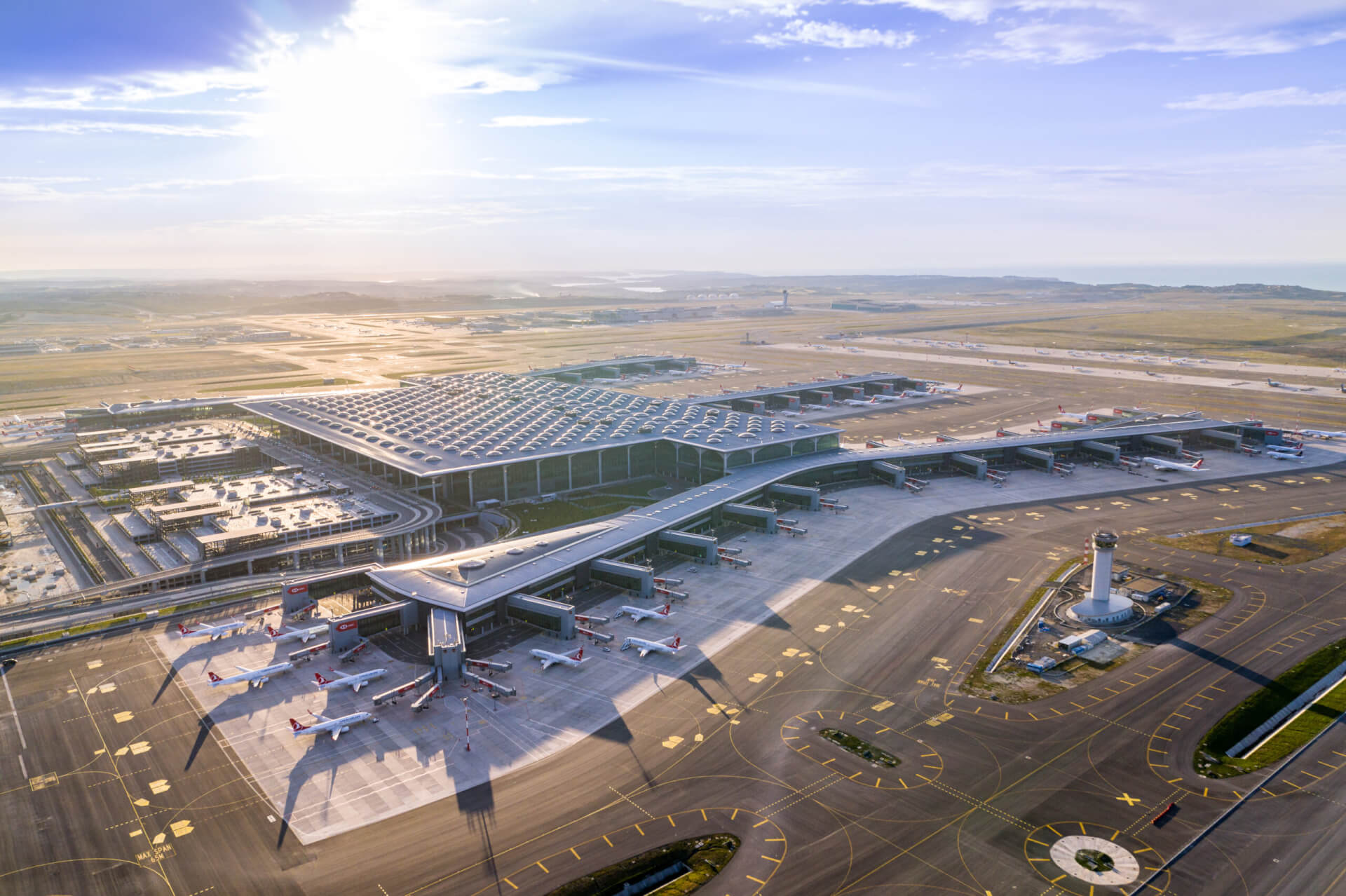 Istanbul Airport was forced to close just a year after opening by Covid-19. Now that it is open again, CEO Kadri Samsunlu is working hard to regain the lost business

As Istanbul Airport completed preparations to open fully on April 6, 2019, CEO Kadri Samsunlu took the opportunity to take a walk through the facility.

He says: “I was walking in the Duty Free area which was totally deserted and told my friends if you see this place like this again, it would mean something very big was happening.

“I was not contemplating a pandemic but whether or not the airport would encounter some opening issues like Heathrow Terminal 5 or, to a certain extent, Berlin(-Brandenburg) Airport. We are lucky that nothing happened and we started up the business without any issues.”

However, fast forward one year to April 2020 and Samsunlu says the unthinkable happened; the airport was forced to suspend all operations as Covid-19 swept across the world and flights were grounded by national lockdowns imposed by governments.

Like airports across the world, the shutdown hit at the worst possible time. “We were hit by this pandemic right in the middle of a period of good progress,” Samsunlu says.

“2020 looked very encouraging in terms of new airlines and the growth of our flagship carrier Turkish Airlines, which was adding new routes or frequencies to certain destinations.

“It was pretty unexpected. This crisis is something we have never experienced in the past, including the sector contraction during the financial crash (in 2008) or during SARS.”

While the airport’s cargo business might have continued as normal, its passenger traffic was decimated; in April, only repatriation flights were allowed and they were limited to 10 to 15 a day.

The beginning of June saw the return of some domestic flights, equal to 20 per cent of June 2019’s seat capacity, while in July the figure rose to 27 per cent.

Speaking exclusively to ARGS at the end of July, Samsunlu adds: “We are looking at about a 70 per cent contraction in the business up until now. For August we are more hopeful, but still the business is going to be somewhere around 40 per cent (of August 2019’s capacity) in the best-case scenario.”

He responded by ordering most staff to work from home with only a minimum number of personnel kept at the airport to meet the limited demand.

Future thinking
But he also kept one eye on the future and, during the first two months of the airport’s closure, worked on a strategy for the resumption of operations.

Samsunlu now believes that rebuilding trust among travellers will be key to at least the beginnings of a return to normality.

“There is a fear factor embedded into this crisis and we need to build passenger trust to use the airport,” he says. “Therefore the absolute priority for managers is the comfort of passengers and, at the same time, ensuring the health and safety of passengers and employees.”

As a result, Istanbul Airport has introduced a number of new measures including only allowing actual passengers inside the terminal; the universal wearing of face masks; and 500 hand sanitisation stations. Plus the air conditioning now only pumps in fresh, as opposed to recycled, air.

Meanwhile, a new IGA hygiene team consists of up to 70 people who are on hand in the terminal to ensure procedures are followed and to offer advice to travellers.

Samsunlu says while many of the measures are in accordance with government advice, the airport has been keen to set the agenda.

He adds: “We’re not waiting for the government to tell us what to do. We are proactively working to assess the situation, the airport, the aircraft, and what action needs to be taken to build trust and confidence in passengers.”

Service resumption
As for the flights that are returning, Samsunlu says domestic flights continue to lead the way and currently account for 60 per cent of total passenger volumes, with the remaining 40 per cent international.

He adds this is far from the original target of 25 per cent domestic and 75 per cent international, a fact that Samsunlu remains resigned to as the pandemic continues.

“Intercontinental flights are of course the most important part of our business and we used to experience very big and attractive load factors,” Samsunlu says. “It is currently seriously limited given the restrictions every country imposes on other countries.”

Samsunlu has little confidence that the situation will improve soon, with international recovery driven by Turkey’s short-haul neighbours in regions including Europe, North Africa and Central Asia.

“These are basically closer so that is why we are seeing demand coming back into Istanbul,” he says. “In terms of long haul, we will have to wait until we see more assurance for the (safety of) passengers to sit in the plane for eight or nine hours.

“We definitely need a vaccine; it is extremely crucial for the revival of the business and gives confidence to the passengers. Secondly, countries must agree on how to normalise the world as we see individual decisions (being made) all around the world.
“Unless free movement of people is possible, we will never get over the crisis and to do that we need common standards to deal with the pandemic.”

In the meantime, Samsunlu admits the airport is working on a new route development strategy and he is already working closely with Turkish Airlines as part of this.

He says: “We are seeing Turkish Airlines aggressively opening and recommencing businesses with all the destinations they can fly to but the current restrictions are limiting their revival and also the revival of Istanbul Airport.”

Samsunlu adds the airport is also well prepared for when the skies do open again, adding: “We continue hiring people for the route development and airline marketing (teams).
“There is a saying in the stock market: when there is blood in the market we need to go and buy shares and I am using the same approach for airports.

“If you become too conservative and too scared to take action for the future then you will get more problems once things start to take off.”

In which case, he says staff are talking more to airports and airlines, which are also being encouraged to set up codeshare arrangements on routes with limited demand in order to share costs.

Speaking to Samsunlu, his plans are thorough and his enthusiasm for the challenge is palpable. If things turn out as positively as we all hope, then surely April 2020 will be the last time he hears the echo of his own footsteps in Istanbul Airport.

Both the newness of Istanbul Airport, which fully opened for operations in April 2019, and its size give it an inherent advantage when it comes to creating new routes.

He adds following the opening of the third runway in June this year as planned, turnaround and taxi times are quick while slots are readily available to interested airlines at any time of the day.

Samsunlu says: “We have an inherent incentive embedded into the airport. It’s the newest infrastructure in the world and we have more capacity both on the landside and the airside for the airlines. (In addition) some of the very high charges in other airports are not (charged) here.”

Samsunlu adds as the Covid-19 pandemic continues to sweep the world, nervous travellers will also appreciate the opportunity to maintain effective social distancing while still catching their flights.

He adds: “This is the biggest terminal in the world so we have a competitive edge against other terminals. Space isn’t an issue and we can give the passengers as much as they want. Some other airports don’t have so much space and are squeezing many people into certain parts of the terminal.

Nor is it just a matter of the available space. Samsunlu says the fact that the terminal has seven main entrances, more than 200 x-ray machines and 200 passport desks is a “huge advantage”.

“At this airport we are going to rearrange the available space so we can maximise it for the passengers and this is very important when you are imposing social distancing,” he adds.

“Going forward, and even before a vaccine is discovered, we can look at using parking lots to handle check-in or screening locations.

“This is not the necessary now, but in the future we have enough headroom to introduce new solutions so people can continue to circulate inside the terminal without getting stuck in crowds.”

For these reasons, Samsunlu argues Istanbul Airport will not be offering new incentives to airlines looking to start or grow operations there.

“The main advantage of the new infrastructure is already available to them,” he says. “Therefore we are not providing any extra discounts or refunds at this moment.”