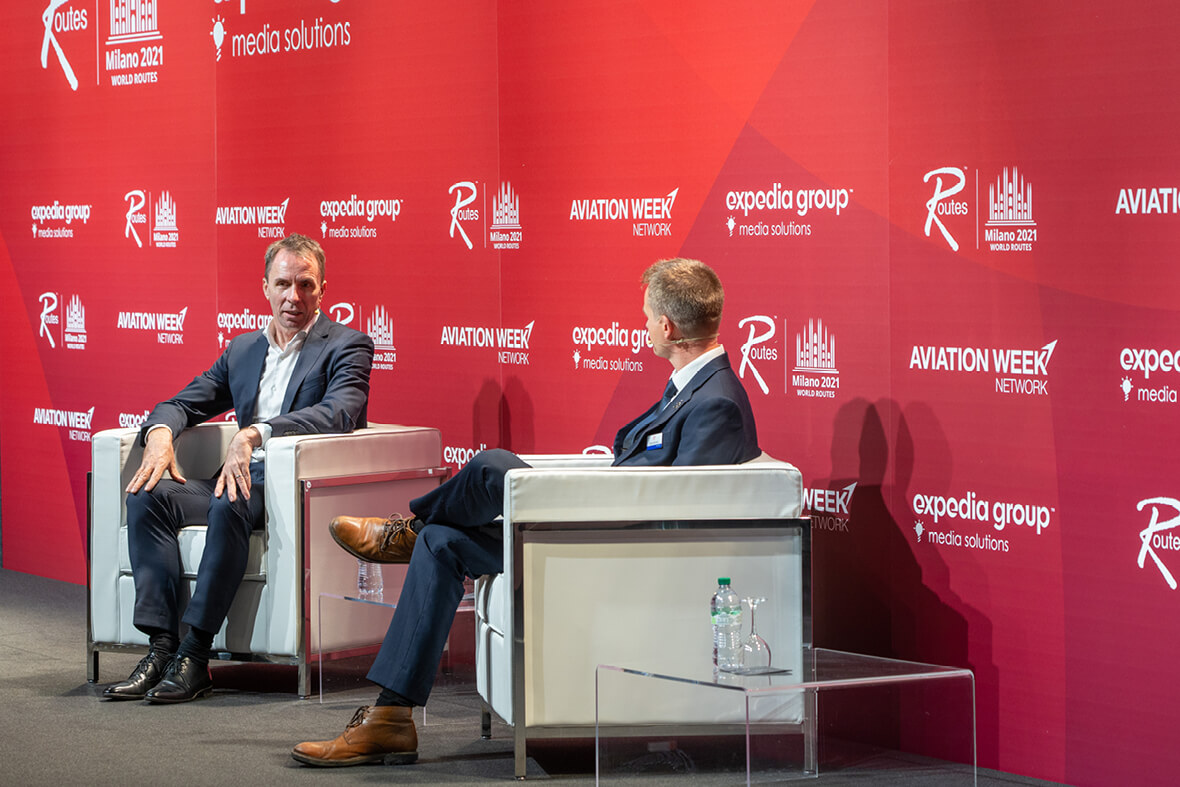 Wizz Air was the first European carrier to see network opportunities coming out of the pandemic, with its chief executive, the polite but plain-speaking Jozsef Varadi, keen to try new things right at the onset of the crisis rather than remain in stasis.
Since the pandemic began, network planning had become a game of “trial and error”, he told delegates during a conference session at World Routes in Milan – and he not only admitted the Hungarian low-cost carrier (LCC) did not always get it right, but celebrated that fact. “If you make no mistakes, you are not pushing your boundaries,” he said.
“We were in Covid-19 mode for two weeks. Then if you trace back what we did, we very quickly started making market announcements,” he said. “From a business perspective, [the crisis] was a clear opportunity for Wizz Air. You have got to set yourself apart from the rest of the industry.”
Wizz Air was one of the few airlines not to slow aircraft deliveries during the crisis and has taken 33 new airliners into its fleet since March 2020. This has given it 25% capacity growth over that time, even though it has not been able to operate all of the new ’planes because of travel restrictions.
At the same time, the carrier was keeping its house in order by taking a conservative financial view and preserving cash at every turn. It now has more cash available than it had pre-Covid, said Varadi. “We could keep going for three years even if we stopped operating completely,” he noted.

Network building
“We learnt during Covid that you need to diversify your market,” said Varadi, and Wizz Air’s strong push into Italy was very helpful in that regard. The airline plans to increase its fleet based in Italy from 15 to 24 aircraft by summer 2022. The formation of Wizz Air UK prior to Brexit, and ventures such as Wizz Air Abu Dhabi, have also been helpful. The latter will be flying to 33 destinations from December when it adds a service to Moscow. Then there are several routes to Jordan from various bases in its network and the airline will continue to pioneer pushing eastward.
While deciding on new service is a process, Varadi explained Wizz Air’s philosophy. “We don’t overthink this… There is a clear recognition that people like to go to nature, to the seaside etc,” he said. In the short term, he believes travellers will tend to favour travelling to sun, sea and ski destinations over city breaks. But, he added, “I don’t think consumer behaviour will change because of Covid.
“Yes, there is an element of trial and error… but at the end of the day it boils down to cost of operations,” said Varadi. “How can we enable lower unit costs versus our competitors and other means of transport? It comes back to our ability to stimulate the market. It’s all down to cost.”

The issue of slots
Varadi is scathing of the European Commission’s decision to temporarily suspend the ‘use it or lose it‘ rule for airport slots. “All of these slot alleviations, they are kind of a joke… It needs to stop,” he told delegates. “Short term, it’s a crime that the system is operating [this way].”
With traffic at some airports at a virtual standstill and layoffs around Europe among airport workers, his view is that airlines like Wizz Air that want to move in, should be allowed to do so. “We call on industry for a significant change here and to get back to normal on slot rules instead of protecting the incumbents,” he said.
On the issue of state aid for ailing airlines, Varadi said that it was tempting for some governments to get back into the aviation market. The crisis gave them a “great excuse” to do so, he said. However, the real question is what happens from here. “My personal view is in the long term, [state assistance] will hamper [airlines’] ability to grow.”
“Structurally this gives more opportunities to Wizz Air,” continued Varadi, who believes that further airline consolidation is inevitable and that LCCs will benefit. “LCCs will continue to grow in the market, and Wizz Air will be one of the front runners to grab these opportunities.
“We don’t need any government aid; we need governments to stay out of aviation and focus on being national market regulators,” he said.
Wizz Air was reported to have made an unsolicited bid for easyJet in September, which was never confirmed by either carrier, although easyJet did confirm it was approached by an unnamed party. Varadi did not comment on this report but added: “Our business is to grow organically, but we are not going to be blind on the market.”
The ambition for this organic growth is massive. The plan is that in five to ten years Wizz Air will be four times as big as it is today, operating 500 aircraft and transporting 170 million passengers a year by 2029-2030.
To help facilitate such growth, Varadi’s message to airports is that they need to encourage airline growth by keeping charges as low as possible. “I am not sure the right way to recoup losses is to increase charges, it just creates a market entry barrier,” he said, responding to reports that some airports have recently announced hikes in charges to make up for their large losses. “In return for lower prices we can commit volume,” he pointed out.
In terms of its fleet development, Wizz Air will continue to up-gauge its Airbus A320 fleet to the A321, raising the average seat count on Wizz Air metal to 207 seats over time. He described the A321neo as an “unbeatable aircraft”.
The airline also has the long-range A321XLR on order. This aircraft will enable the carrier to launch new routes that were beyond its imagination previously, such as flights from the Canary Islands to Abu Dhabi and from Iceland to Jordan. However, Wizz Air will not take on transatlantic services with the A321XLR. “We are not going to do stupid things,” said Varadi, noting that there are plenty of examples of airlines that were “over-eager” in launching this type of service, and failed.