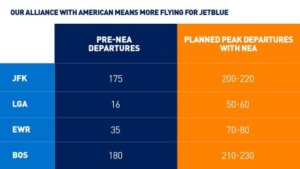 COVID-19 has thrown unimaginable challenges at us, and we’ve worked together to manage them every step of the way. We played defense to reduce spending and maintain our 21-year no furlough commitment, but we also went on the offense by investing in new routes and BlueCities that bring more of JetBlue’s competitive effect and low fares to the market. Our Northeast Alliance (NEA) with American Airlines is an example of how we played offense to not only get our fleet and Crewmembers flying again, but also set up JetBlue for long-term growth and bring more competition to the Northeast.

Given our focus on the NEA, I wanted to talk about action the U.S. Department of Justice (DOJ) is taking in federal court to unwind the NEA. Regardless of what the DOJ claims about us in court and in the media, it’s important you know that JetBlue’s commitment to competition and low fares remains as strong as ever. This is not at all like a merger with American – we have two different business models and are not working together on pricing. It’s also important that you have the full picture on benefits the NEA is already delivering, and I want to reassure you that the DOJ’s action will not affect our plans to continue implementing the NEA.

Many things set JetBlue apart, but our “secret sauce” is our 20,000 passionate and caring Crewmembers who believe a small airline like ours can continue to make a big difference. Each of you deliver a simple but extraordinary value proposition – that no one should have to choose between a low fare and a great experience. By bringing this to life for 21 years, you’ve helped us build a much-loved low-fare brand and a reputation for shaking up the status quo, challenging the competition to raise their game.

Even though our low fares and great service benefit travelers, it hasn’t always been easy to get our foot in the door at the largest and most important congested airports where the big airlines dominate. We’ve had to fight our way into airports like Los Angeles (LAX), Newark, Atlanta, Miami and others where the “JetBlue Effect” of lowering fares and stimulating new demand is badly needed.

If there is a silver lining to the pandemic’s impact on our industry, it’s that space freed up for us to introduce competition in airports like LAX and Miami, and we’re setting ourselves up for long-term success at London Heathrow, where we recently launched our transformative transatlantic service. I’m so proud of how far we’ve come, but there is still plenty of opportunity for us to shake up the market with more competition, especially in the Northeast where Customers who know and love JetBlue keep asking for us to grow.

While we have built a successful business in both New York and Boston, our runway for growth in the Northeast to challenge global legacy carriers Delta and United is limited. And I’m sad to say that our biggest obstacle to bringing more low fares and great service to the Northeast right now is the DOJ – the very government agency that should be making every effort to foster robust competition among airlines.

In New York’s airports, there has been quite literally no room for us to add flights. There are no slots available at LGA and JFK, and it remains extremely difficult to grow in Newark given gate and space constraints. Delta and United – with large international networks, ample financial resources, and significant airport gate and slot holdings – have a lock on the market and make it impossible for an airline like JetBlue to grow and introduce sorely needed low-fare competition. In Boston, Customers really love flying JetBlue, but our sales pitch is hampered by a relative lack of network breadth and depth compared to the deep-pocketed legacy airline that plans to grow even further there.

These obstacles to growth led us to an unlikely alliance with American Airlines which, even as the world’s largest carrier, also has not been able to compete with Delta and United’s dominance in the Northeast.

The backbone of the NEA is lots of JetBlue growth, bringing our much-loved experience and low fares on more routes as we tap into American’s slot portfolio and Customer base. We create a viable third competitor in the Northeast by connecting our growing network to American’s through codeshare and reciprocal loyalty benefits. American gets to codeshare and put its loyal Customers on JetBlue’s growing New York and Boston network of flights. The NEA also enables JetBlue to grow our network even faster than we otherwise would have, and these opportunities are a large part of why we delayed the retirement of our 30 owned E190 aircraft.

We hoped this plan to introduce new competition to the marketplace would receive a warm reception from both DOT and DOJ. After an exhaustive six-month review, the DOT welcomed this new, meaningful change to the competitive landscape by entering into an agreement with us. DOJ and some states, however, have not been receptive. DOJ believes that American’s influence will bring an end to the “JetBlue Effect.” Of course, the NEA is already up and running and every day we are proving DOJ’s theory wrong. We have no intention of abandoning our low-fare model – in fact, the NEA empowers us to deliver more of it.

The NEA is already delivering benefits

In court, DOJ is sure to face an uphill battle opposing the expansion of low fares in New York and Boston. There is absolutely no evidence that the NEA is harming consumers, and quite the opposite, it is already delivering on the benefits we promised:

The NEA is enabling the expansion of JetBlue’s low fares and great service:

Together with American, we are providing Customers more choices and benefits that create a true third competitor to the two dominant legacies in the Northeast.

We have tried, and failed, for many years to gain additional slots so that we can add flights and competition. Without more slots and access available to us, we developed a creative way to grow into a stronger competitor to United and Delta in these very congested markets, while retaining our independence and competing with the same fierceness against American in other markets.

The irony now is that the government agency responsible for preserving competition is instead trying to take away our ability to further expand our low fares in these markets. What the DOJ says and does seem to be in conflict – it’s quite puzzling and hypocritical for DOJ to applaud DOT’s recent efforts to promote competition at Newark while standing in the way of JetBlue’s growth. Rather than use the public’s resources to stifle competition in court, DOJ should monitor the NEA’s progress over the months ahead and hold us accountable for delivering the Customer benefits we’ve promised.

Our implementation of the NEA will continue

While it’s extremely unfortunate DOJ would rather take us to court than help us compete, we’re ready to make a strong case on why more low-fare JetBlue growth is good for Customers. We fully expect the court to find that nothing about the NEA changes our business model or our role as a force for good in the industry.

We cannot let this lawsuit slow our momentum in bringing the NEA to life. Because of growth from the NEA, we are on track to hire 1,800 new Crewmembers this year. We fully intend to launch the new routes and BlueCities we have announced, as well as expand codeshare options. Our IT investments will move full speed ahead to improve our systems in support of our Crewmembers and Customers. Expect to see us deliver great new loyalty program enhancements in the coming months for both JetBlue and American Customers. We’ll continue to work with American to provide better re-accommodation options when our Customers’ travel plans don’t go as expected. And, within our airport operations, we’ll continue to find ways to offer a seamless Customer experience and connections – for example, with our new bussing operation at JFK.

As we continue forward, many others will stand behind the NEA – loyal Customers who now have more choices and low fares, thousands of Crewmembers benefitting from the additional flying, and key Congressional leaders like Senate Majority Leader Chuck Schumer who have voiced their support for the NEA. Like every challenge we’ve faced in our history, we will come out the other side stronger and prove to all the skeptics what good JetBlue can do when given the chance to make a difference.