Accelerating its cash generation efforts, JetBlue (B6) announced 24 new routes in the US, Latin American, and the Caribbean.

The operations will be effective in November and December and aim to capture traffic on nonstop routes. Apart from this goal, the airline expects to increase its demand in these focus cities.

As part of its domestic and international operations, B6 will reactivate some aircraft. This decision also seeks to support several of the carrier’s strategic moves that include a partnership with American Airlines (AA), the opening of 30 new routes, and a focus on Los Angeles International (LAX).

By doing this, the airline is showing its ability to quickly adjust to new customer behaviors and booking patterns, said B6 Head of Revenue and Planning, Scott Laurence. The task is to remain flexible, allowing market demand to determine B6’s route frequencies.

Focus Cities across the US 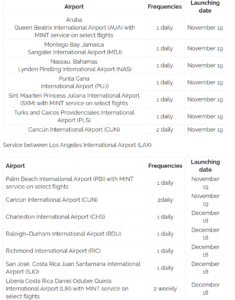 With Florida as a focus city, apart from the EWR and LAX hubs, B6 will fly at least 27 frequencies per week in the Southeastern state. On November 19, the carrier will launch a daily service between Fort Myers Southwest Florida International Airport (RSW) and RDU.

On the same day, B6 will start a daily service between Tampa International Airport (TPA), CUN and RIC.

Routes in Latin American and the Caribbean

From November 19, the carrier will extend its frequencies at CUN, connecting Mexico with RDU and SFO with a daily frequency and two daily flights, respectively.

On the same day, B6 will also extend its connection between Jamaica MBJ and RDU with a daily flight.