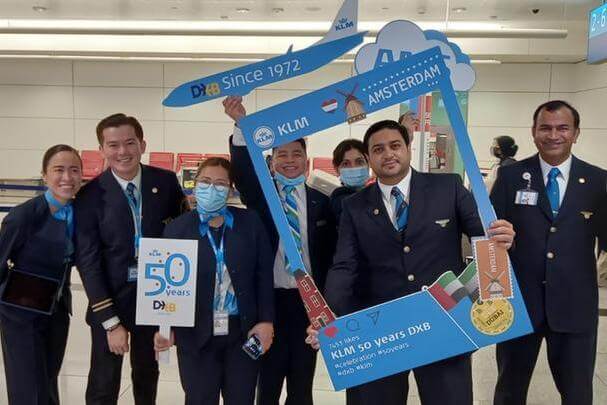 KLM Royal Dutch Airlines (KLM) has marked the 50th anniversary of the airline’s first passenger flight to Dubai, which arrived on 5th April 1972.

The anniversary flight was greeted on arrival at Dubai International Airport by airport representatives and KLM staff, who joined a ceremony to mark the milestone.

KLM started services to Dubai on 5th April 1972 with a once-a-week connection via Athens and Dhahran, operating an extended Douglas DC-8 jet aircraft.

The flight returned from Dubai on April 6th. At that time, Dubai International airport handled around 500,000 passengers per year (1970 figures) and Schiphol Airport more than 5 million.

“We have the additional honour of celebrating this anniversary during the UAE’s ‘Year of the 50th’ and at the conclusion of this extraordinary global event, Expo 2020 Dubai.

“It’s a time to pause briefly and reflect on Dubai’s remarkable progress over the last 50 years and to express our gratitude to Dubai government and the airport authorities for their tremendous support.

“It’s also a time to look ahead at the strong and growing relationship between Dubai and KLM, and our shared commitment to innovation and sustainability.”