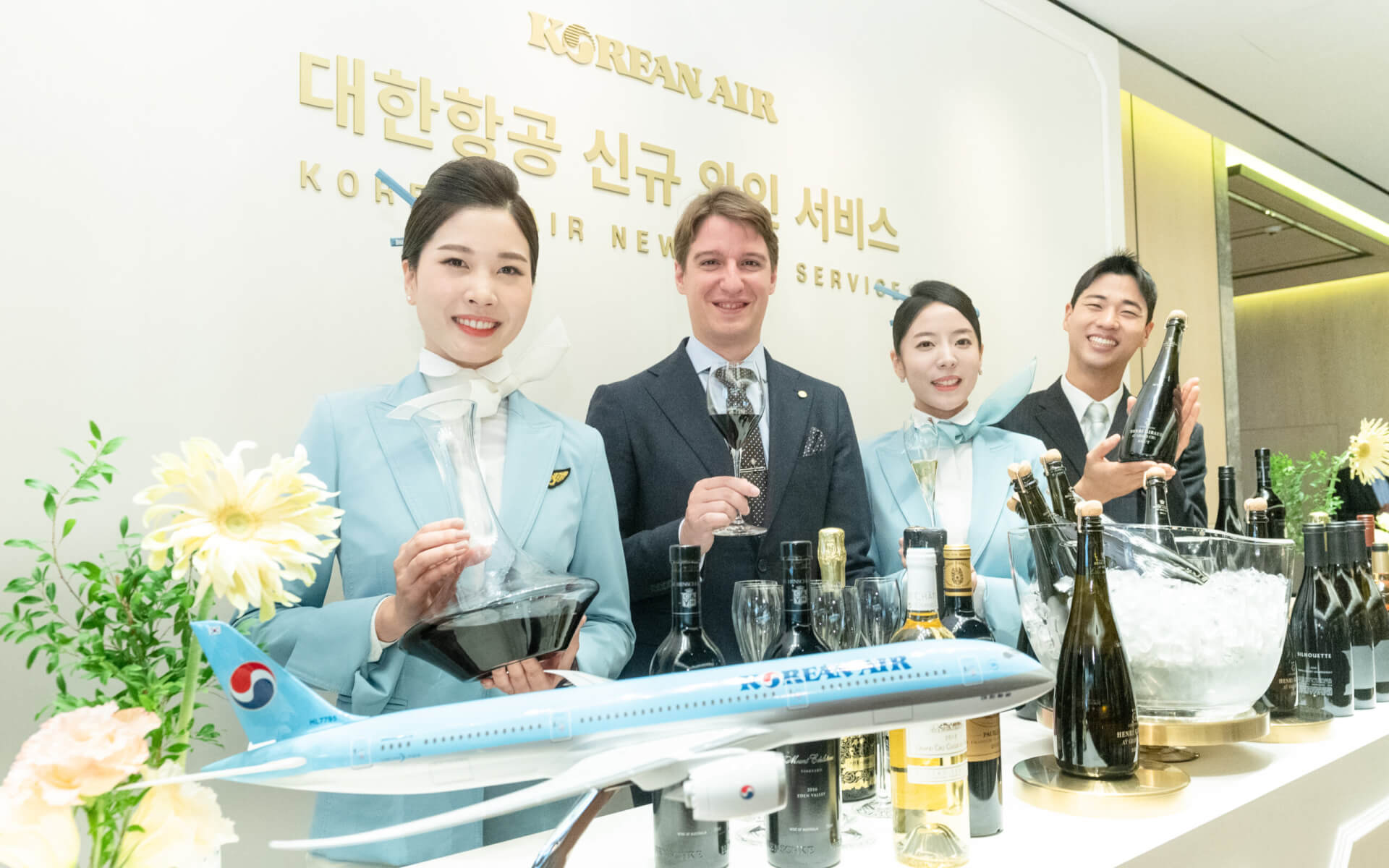 Korean Air has showcased its selection of new inflight wines, which will be served onboard from March 2023.

Korean Air has collaborated with Marc Almert, who carries the accolade of “World’s Best Sommelier 2019,” as awarded by the International Sommelier Association.

The airline also referred to wine data collected last year and created a longlist of 900 wines in a variety of categories.

Korean Air along with Marc Almut then whittled down the list to a shortlist of 150 wines of various grape varieties, vintages and regions, including France, Spain, USA and Australia.

The two wine experts, Marc Almut and Sang Jun Lee, then tasted and evaluated each wine on October 11 and 12 at the Grand Hyatt Incheon Hotel.

After the long process, the airline was finally able to showcase 50 wines, which will be served on board.

One of the new wines selected for First Class is an Australian Henschke Mount Edelstone Shiraz, a concentrated wine produced from 100% Shiraz grapes with the aroma of rich pepper, mint and eucalyptus.

The strong flavor, unique to Shiraz, makes for a luxurious balance, harmonizing well with the first-class inflight meal options, such as steak and Korean cuisine.

Among the high-quality wines selected for Prestige Class was the La Perriere Megalithe Sancerre, a white wine from the Loire Valley.

The wine is made from Sauvignon Blanc grapes, harvested by hand, with half of them aged in oak barrels for more than six months.

The wine features the unique fresh acidity of Sauvignon Blanc, soft and subtle with the aftertaste of oak-aged wine.

It was evaluated that the Riesling’s refreshing scent and mild flavor would harmonize well with inflight meals.

Marc Almert, who participated in the wine selection, is known as one of the world’s best sommeliers, and is from Cologne, Germany.

In 2019, at the age of 27, he won the title of the youngest champion at the “World Best Sommelier Competition” organized by the International Sommelier Association.

He is currently pursuing his career as the chief sommelier at Baur au Lac, a luxury hotel in Zurich, Switzerland.

When considering the choices for new inflight wines, the sommeliers considered the cabin environment during the flight and the pairing of the wines with inflight meals.

Marc Almert said, “It was a huge task selecting the wines from so many fine options on the long list.

“The cabin pressure and a drier environment can distort the taste of some wines and we took this into consideration and chose fruity and aromatic wines that can perfectly compliment the inflight cuisine.”