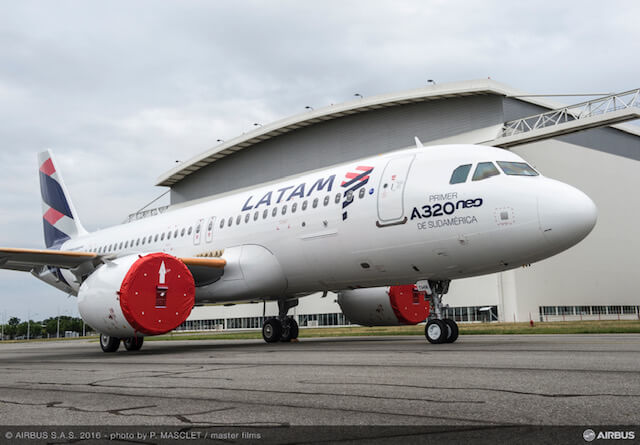 This upgrade will be performed on over 200 of their A320 family fleet, becoming the biggest Airbus fleet equipped with this powerful fuel saving solution.

All the equipment kits required for the installation of the DPO performance software on LATAM’s A320 Family fleet will start to be delivered from the end of 2021 until early 2022.

To further enhance the fuel reduction DPO maximises the time spent at efficient cruise level -by not starting the descent too early- and subsequently minimising the amount of time spent at an inefficient ‘level-off’ stage at the bottom of the descent –when the aircraft’s engines generate thrust to maintain level flight in dense air prior to final landing approach.

Optimisation of the aircraft’s flight trajectory is one of the key factors to further improve efficiency in cooperation with Air Traffic Control.

By optimising the descent trajectories of its aircraft and reducing the fuel flow to the engines -arising from the lowest ‘idle’ thrust setting during the descent phase- thanks to the DPO function, LATAM Airlines will generate over 100 tons fuel savings per year per aircraft across their network, including constrained airports like Lima, Santiago and São Paulo.

This will reduce CO2 emissions by over 300 tons per year per aircraft, representing a significant contribution to more sustainable flight operations with 60,000 tons of CO2 each year for the entire LATAM Airlines’ A320 Family fleet.