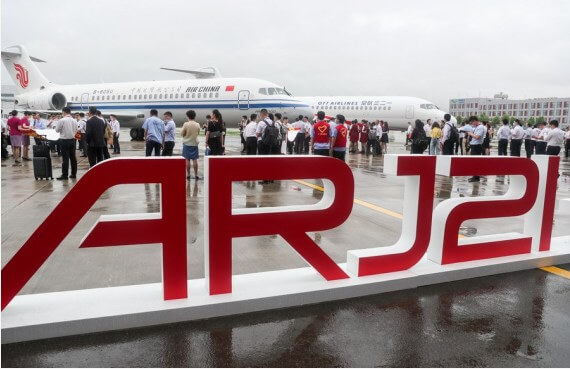 The following facts and figures offer a glimpse of the civil aircraft model and its latest performance in the market:

— The ARJ21 is China’s first turbofan regional passenger jetliner. Designed with a capacity of 78 to 90 seats and a range of 3,700 km, it can fly in alpine and plateau regions and adapt to varying airport conditions.

— As a pioneer of Chinese commercial airplanes, the ARJ21 aircraft was put into commercial service in June 2016 by Chengdu Airlines.

— On June 28 this year, the Commercial Aircraft Corporation of China (COMAC) delivered one ARJ21 each for the country’s three major carriers: Air China, China Eastern Airlines and China Southern Airlines.

These deliveries marked the arrival of the homegrown jetliner in the domestic mainstream civil aviation market.

— As of November, the COMAC, developer of ARJ21, had delivered a total of 40 ARJ21 airplanes to customers.

— As of November, ARJ21 planes had been used on 86 routes connecting 64 cities and served more than 1.31 million passengers in commercial operations, according to COMAC.