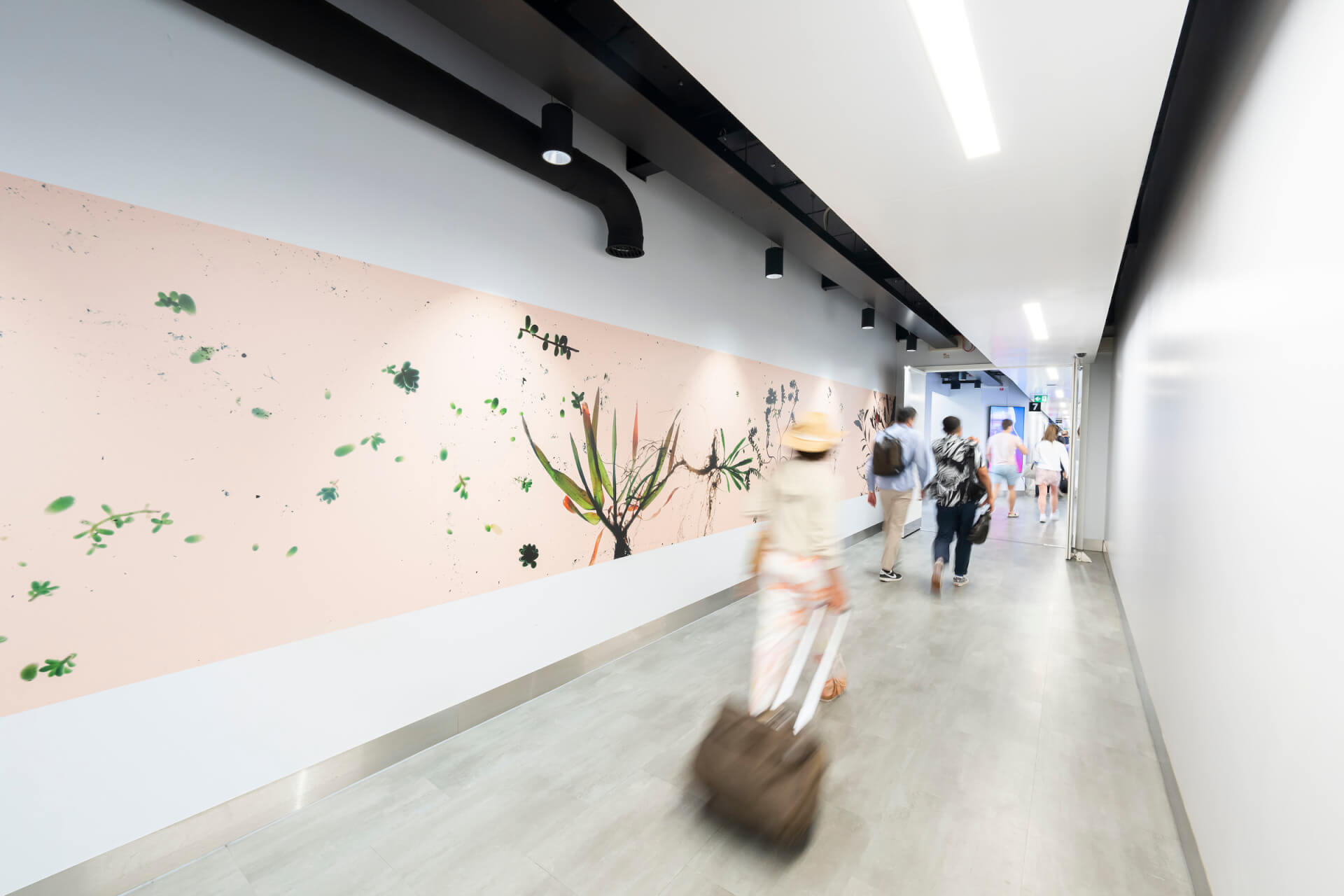 This unique work, located in the West Pier arrivals corridor, will greet millions of international visitors as passengers return to the airport and London reopens to the world.

The commission, which will be in place for two years, transmits a message of optimism and positivity from nature, providing a unique welcome to the Royal Docks and its diverse and vibrant cultural scene as City Airport once again connects travellers from across the globe to the heart of London.

Curated by The Line, East London’s public art walk running between Queen Elizabeth Olympic Park and The O2, Destination London aims to communicate a vivid sense of the layered histories of London, expressed through the diverse but often overlooked botanical life found around London City Airport.

Presented as a series of imagined and atmospheric landscapes through a sequence of 4 large photograms, the works are made with a cameraless technique in a darkroom through the manipulation of light and materials on paper.

Visitors will encounter the rich flora found by Anne Hardy at London City Airport, on the airfield and from the original dock side, as well as in the wild spaces of Bow Creek and the exotic species to be found in nearby urban gardens and allotments.

Destination London will encapsulate the long history of London as a place of travel, trade and movement through the plants which have made their way here over thousands of years.

Anne Hardy commented: “The Thames connects us literally to the past, and to the trade and people who have travelled here over its surface.

“The surrounding landscape of tidal flows and post-industrial development forms a kind of archaeology in flux, which holds within it a parallel botanic universe of international plants.

“Many of which were brought here by people; for food and connection to home cultures, as well as for trade and botanic research.”

A panel comprising local stakeholders and The Line’s Co-Founder and Director, Megan Piper, selected Anne Hardy from a shortlist of East London-based artists.

Megan Piper, Co-Founder and Director of The Line, said: “We are delighted to have curated this commission with Anne Hardy, which has transformed the International Arrivals corridor for inbound travellers and welcomes visitors to London.

“The international origins of local flora reflect the diversity that is a defining feature of the city, which is important to celebrate now more than ever.”

“Anne Hardy’s work brings a new and exciting cultural dimension to our International Arrivals corridor, with its vibrant colours giving off an air of calm and projecting feelings of wellbeing and positivity from nature, as we emerge from the pandemic.

“The plant life featured in Destination London was carefully collected by Anne Hardy herself from locations around the airport.

“We really hope that, over the next two years, international arriving passengers embrace this unique and memorable welcome to East London from the moment they touch down at the airport.”

Justine Simons OBE, Deputy Mayor for Culture and the Creative Industries, said: “I am delighted that London City Airport has unveiled a new public art commission to welcome visitors to the capital.

“One of the reasons visitors love coming here is because we are brimming with creativity, and these bold landscapes celebrate the beauty within our city.”