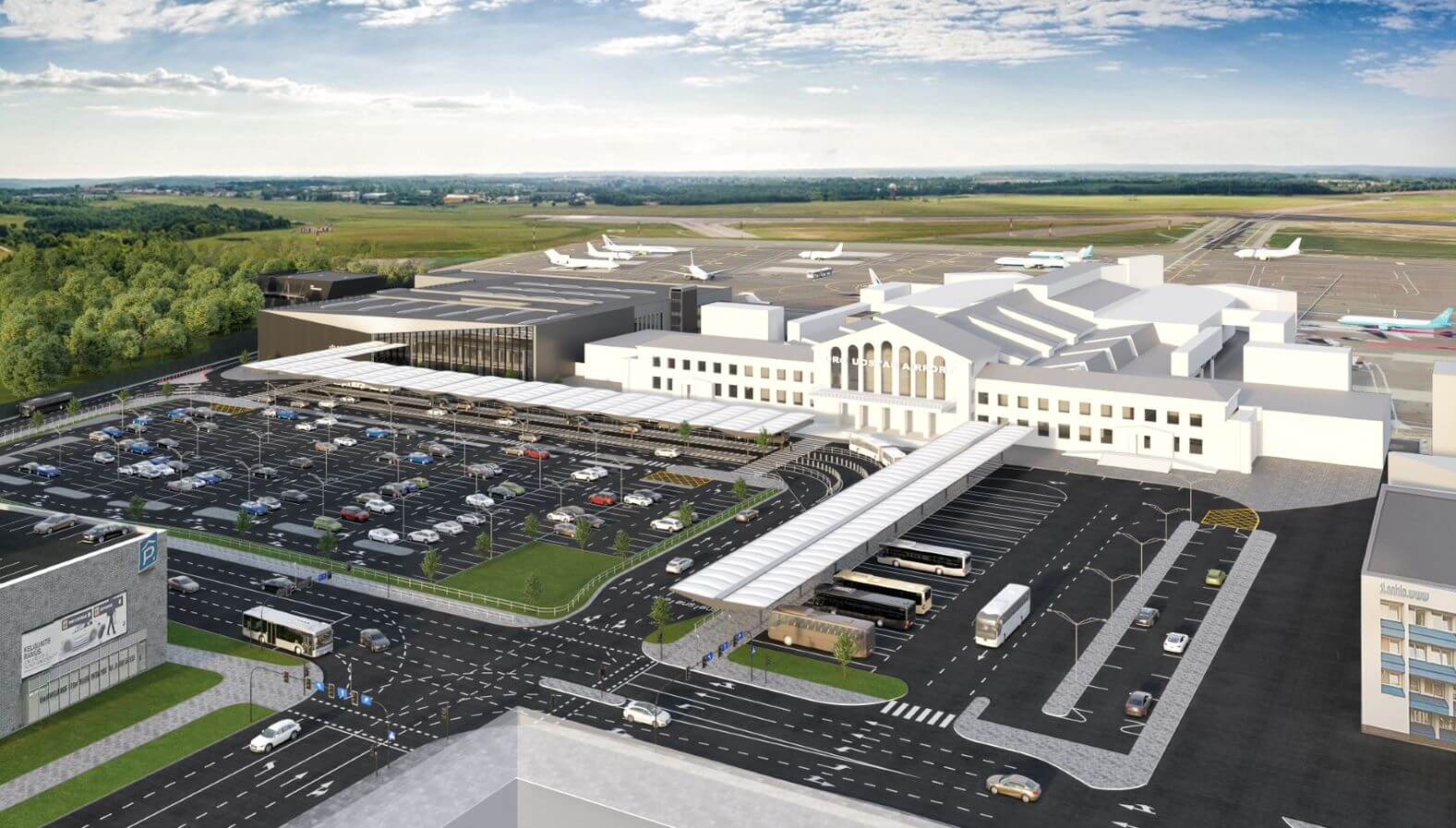 Mitnija, one of the largest construction companies in Lithuania, has won an almost EUR 25 million public tender to build a new 14,400 sq. m passenger terminal at Vilnius International Airport. The contract also includes transformation of another 34,000 sq. m of access areas. The project was commissioned by Lithuanian Airports, a state-owned enterprise. After completion of equipment installation and other technical work, the terminal will welcome passengers at the end of 2022.

The new A++ energy efficiency passenger terminal will be built in the northern area of the airport, between the old terminal and the recently built VIP terminal with a conference center. It will increase the total area of Vilnius airport terminals by one third, and passenger capacity will more than double from the current 900 to 2,400 passengers per hour.

The new terminal will have two stories. The first story will house passenger check-in and public spaces, as well as cafes, airline company offices and other commercial premises. On the second story, there will be a security check area and departure gates for Schengen passengers.

The building will also have the necessary technical areas – baggage screening and sorting, engineering systems. The new terminal will be connected to the existing one by a spacious gallery which will ensure easy movement between the two terminals.

“We are launching one of the most important stages of this four-year project. Detailed planning of works and needs has taken several years. The project is necessary for increasing the capacity of Vilnius Airport and becomes even more relevant in an attempt to adapt to the new challenges posed by the pandemic. It will allow for even more efficient distancing. Its successful implementation calls not only for a modern, large area but also for technological solutions inside of it. The new terminal will therefore have a much more modern infrastructure designed for passenger convenience, more automated solutions and self-service,” said Dainius Čiuplys, Head of Vilnius Airport.

According to Mr Čiuplys, investments in the new terminal are planned to pay off in 10 to 15 years. Actual works and the preparation of the site for the new building should begin shortly. During all scheduled work, the airport will operate as usual.

Julius Gendvilis, CEO of Mitnija, said that the successful tender to construct the new terminal at the Vilnius airport is an acknowledgement of the company’s experience in building complex public infrastructure projects.

“We built the Kaunas Clinics at the Lithuanian University of Health Sciences and the National Center for Physical and Technological Sciences, took part in implementing the Rail Baltica project, built the athletic training center in Druskininkai and renovated and upgraded Lithuanian and Latvian air force base infrastructure for NATO and the U.S. Air Force, among other projects. I am absolutely certain that we will also complete the new terminal at Vilnius International Airport on time and within the agreed budget”.

Andrius Drizga, Mitnija’s Project Manager, said that, along with the construction of the new terminal, the company will also transform the terminal’s access areas.

“This work will pose the greatest challenge to our team. In only three months we will have to upgrade 34,000 sq. m of access areas – reconfigure the engineering networks, parking lot and transport system, as well as construct roof covers. This will create a new transport system with a much better throughput. We already know that this work is likely to proceed 24/7.”

Mitnija will ensure that the construction of the new terminal at the Vilnius airport does not affect the airport’s operations and will guarantee the safety and comfort of its passengers and staff. Special attention will also be paid to energy efficiency, sustainability and environmental requirements. The new terminal building will meet A++ energy efficiency requirements, and Mitnija will carry out the construction in accordance with the BREEAM standard, aiming for a “Good” evaluation.