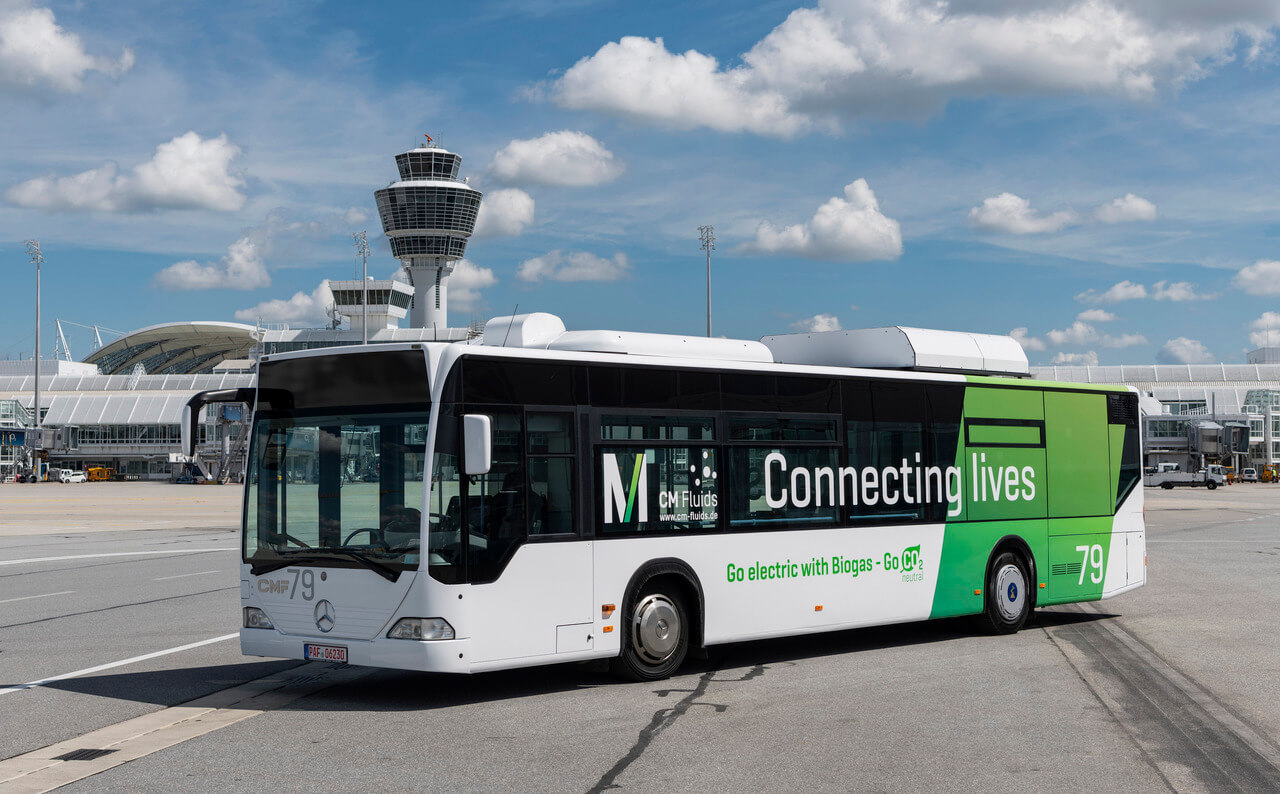 The Association of the German Gas Industry has awarded this year’s Innovation Prize in the “Mobility & Transport” category to the pilot test of a passenger bus that is used at the airport and runs on liquid methane. The project has now been honored at a ceremony at the “House of Innovation” in Berlin: At Munich Airport, “Gas Innovations for the Energy Turnaround” were developed in cooperation with the start-up company “CM Fluids” from Rohrbach. Together with other partner companies, the award winners have realized a particularly innovative drive concept for the passenger bus and thus successfully implemented “Ideas for sustainable and environmentally conscious mobility of the future”.

As part of the highly promising pilot project at Munich Airport, a passenger bus originally powered by diesel from the airport’s vehicle fleet was converted to a climate-friendly drive system using liquid methane and thus made fit for the future.

With the patented drive concept “CMF drive” the bus was equipped with a generator-electric drive. The passenger bus is powered by a combustion engine and will in future be fuelled with regeneratively produced biogas. The energy generated by the engine is temporarily stored in a buffer battery, which in turn supplies the bus’s electric drive axle with electricity. After the successful conversion, the bus will be particularly energy-efficient and even climate-neutral when refuelled with biomethane.

The advantages of the CMF drive system are particularly clear for passenger buses with long operating times or frequent starts and stops, such as those used on the apron of Munich Airport: braking energy is recovered and also temporarily stored in the buffer battery. In contrast to conventional electric buses, a single tank of fuel can travel up to 800 kilometers.

For the jury of the German gas industry, chaired by Prof. Dr. Frank Behrendt, head of the Department of Energy Process Engineering and Conversion Technologies for Renewable Energies at the Technical University of Berlin, the joint project makes an important contribution to climate protection: “With the conversion from diesel to biomethane, CM Fluids offers a unique solution that is both economically viable and reduces exhaust emissions to almost zero. Munich Airport is thus becoming a pioneer in climate protection on the apron”.

Jost Lammers, CEO of Munich Airport: “We are delighted that our commitment to sustainable airport operations has been honored with the German gas industry’s Innovation Award. Here, resourceful engineers have developed a showcase project that could serve as a blueprint for many municipal transport companies. On the one hand, the conversion of existing vehicles is economical and saves expensive new purchases, and on the other hand, regionally produced biomethane from our surrounding area is consumed directly at the airport”.