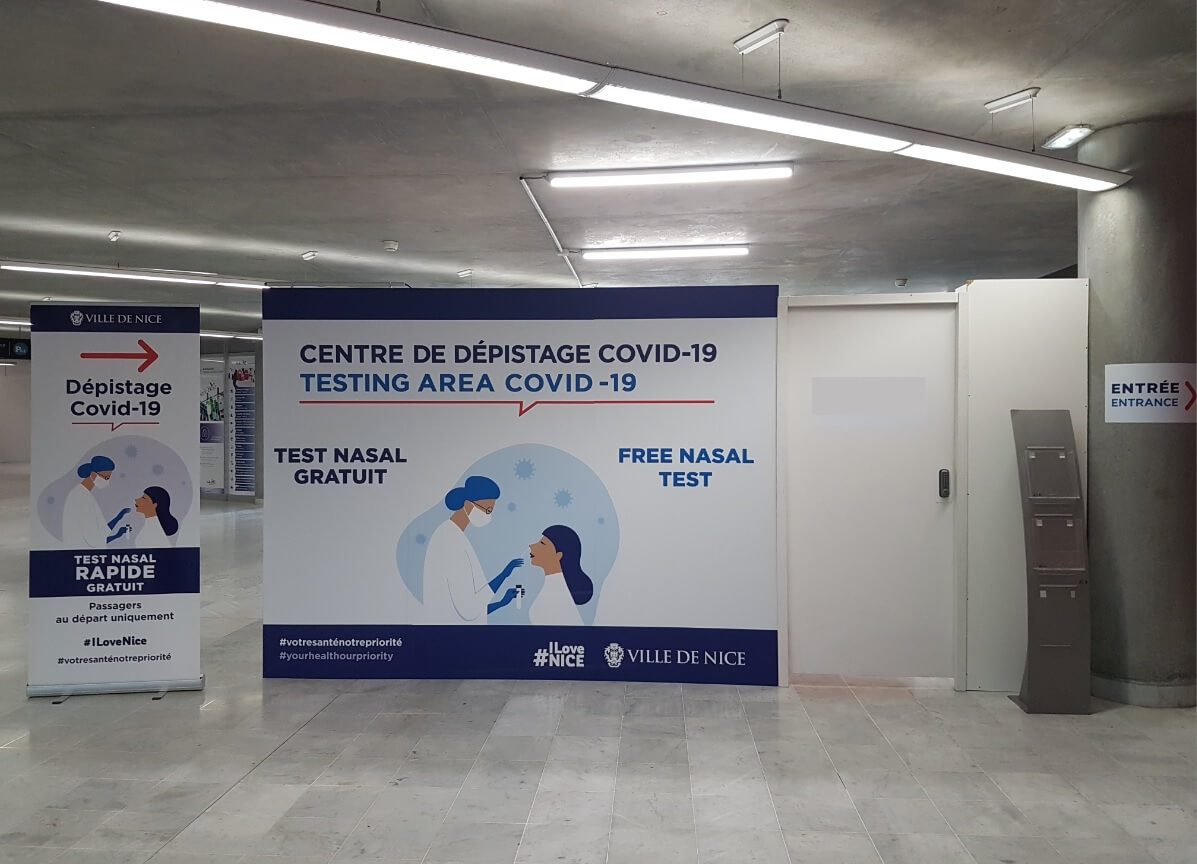 In response to the announcement of the French Minister for Transport on 15 October and at the request of the International Air Transport Association (IATA) for the implementation of health corridors, Nice Côte d’Azur Airport has organised and established a room dedicated to antigen tests in its Terminal 2. This is a full-scale test that aims to be deployed on a wider scale and in the long term in other airports.

Nice Côte d’Azur Airport, which has ensured an uninterrupted public service since 16 March and continues to strive to offer the best quality of service, in particular in terms of health protection, will from Friday 30 October at 5am open the first comprehensive technical platform, supervised by health authorities, for organising antigen tests.

These tests will be offered on a voluntary basis to passengers travelling to French overseas territories via Paris Orly or Paris Charles de Gaulle, or to Rome. They will also be available to all outbound travellers on request. For this experimental phase, agreements have been made with Air France and Alitalia to involve these airlines in the process. This partnership means that we are able to anticipate the number of passengers due to board the above-mentioned flights and optimise the sampling and testing room. This will enable up to six stations to be available at the same time for taking samples, and four for the administrative, registering, and passenger tracking phases. The testing room will be open every day from 5am, and its operations will be modified in accordance with air traffic over the coming weeks.

The implementation of this comprehensive system aims to reassure passengers by combatting the spread of the virus, to facilitate the reopening of borders according to bilateral agreements recognising the validity of these tests, and to cover their costs through the French health insurance system.

“By working hand in hand with French public services, the city of Nice, the health authorities, the airlines and their groundhandling agents, we are creating the optimal conditions to enable the largest number of people to be tested all while maintaining fluid passenger flows and the punctuality of departing flights. We would like to thank the Minister for Transport, his teams and all the partners in this pilot project for having trusted us to implement this experiment, which is set to be deployed on a wider scale,” commented Franck Goldnadel, Chairman of the Board for Aéroports de la Côte d’Azur.

These free tests are offered to passengers departing from Nice Airport, as a priority those travelling to the countries or regions concerned, on direct or stopover flights.

The introduction of this testing service forms part of a comprehensive policy, initiated by the airport on 16 March and which satisfies all the recommendations of the various health authorities.