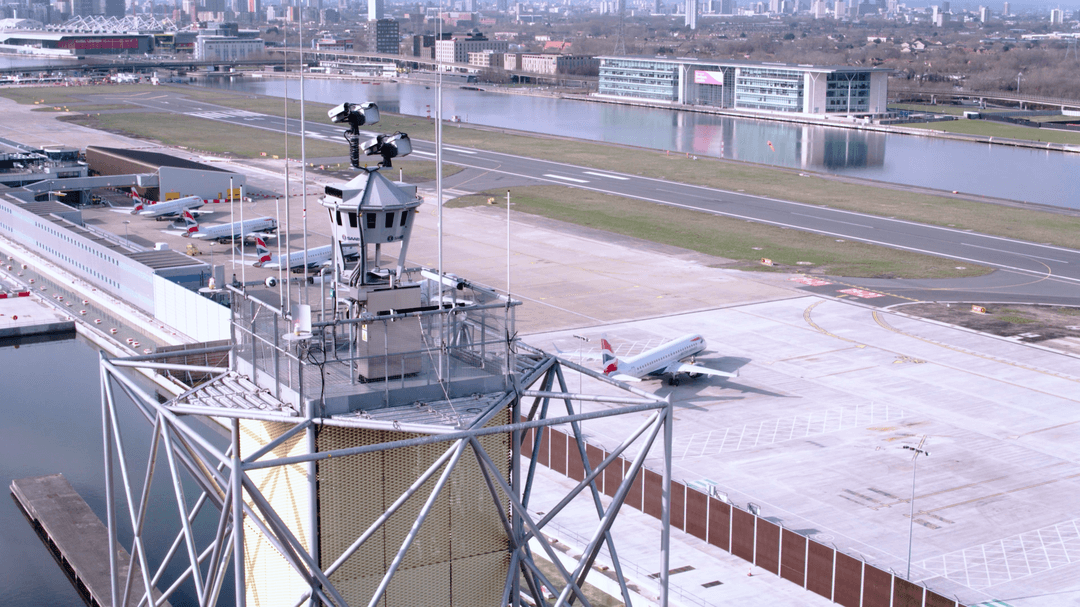 Unlike most airports, air traffic control is provided by a digital system, which sees fourteen high-definition cameras and sensors mounted on a landside mast at the airport which provide a 360-degree view of the airfield.

This is all relayed through super-fast fibre connections to a new control room in NATS’ air traffic control centre in Swanwick.

The Air Traffic Controllers, who now manage traffic in and out of LCY from a specially designed control room, 108 miles away in the NATS control centre in Swanwick, have been using the gradual pick up in traffic to build resilience and familiarity across the ATC team.

The backdrop to the announcement a year ago was one of uncertainty, with significant travel restrictions in place, markets closed off entirely and consumer confidence at an understandably low level.

Fast forward a year, and the context couldn’t be more different with the airport now seeing highs of over 11,000 passengers per day and 180 daily rotations.

This comes ahead of a busy summer season which will see London City connect to 35 destinations around the UK and Europe.

Speaking of his experiences over the past year, Lawrie McCurrach, NATS Watch Manager at London City said: “One of the challenges was how little traffic there was due to Covid. However, the lower traffic levels helped us get to grips with the new technology and to get familiar with the new infrastructure at the airport.

“It now has a full-length taxi way so there is no more back tracking up the runway. There are also extra stands for the aircraft to park in, so we basically no longer control the same airport that we were did before when we were based in the physical tower.

“As traffic picks up, we are moving back to normal numbers with everyone on shift and more positions opened in the tower.

“We’ve also been using lessons learnt at other airports where the traffic has picked up faster and earlier and generally training on operating with more flights. We are ready to rock and roll!”

Alison FitzGerald, the airport’s Chief Operating Officer, who led on the delivery of the overall project, believes the Digital Tower has been an unmitigated success and see’s further potential in the product:

“For me, given the extensive preparation and testing, the technology was never in question.

“But what has impressed me so much is the way our engineering teams worked together, despite not being in the same location, to resolve issues where they have arisen at all times of the day and in every possible weather condition!

“Now that the technology is bedded in, we are starting to assess its broader potential.

“One area there’s scope to do more, particularly given the position and height of the Tower, is around how we can share real-time information with airport stakeholders for safety and security purposes.

“While we are excited to be scaling up the number of flights at London City, some issues haven’t gone away and there are risks we need to be alive to.”

While the Tower very much represents the future for Air Traffic control globally, there have been some issues that have arisen that you just can’t prepare for.

Commenting, Lawrie shared this story: “When we’re in the Control Room and it’s raining at London City, you still get all wrapped up and get your jacket on because it’s so immersive that you actually feel cold!

“You forget you’re not at the airport and you’re actually in sunny Swanwick, so we’ve left the tower room sometimes and gotten some funny looks!”

While regular cleaning of the cameras takes place and established protocols are in place to clear birds, Graham Lewis – Deputy Service Manager, NATS Engineering shared this anecdote: “It’s quite common to have birds perching on our physical towers because of their height.

“Normally we’d tap the glass to get them to leave but now we have to constantly remind ourselves that we can’t tap the screens to get them to go away like we would in a normal tower!

“Occasionally controllers will see a huge bird face on their screen which really is a funny sight to see!”