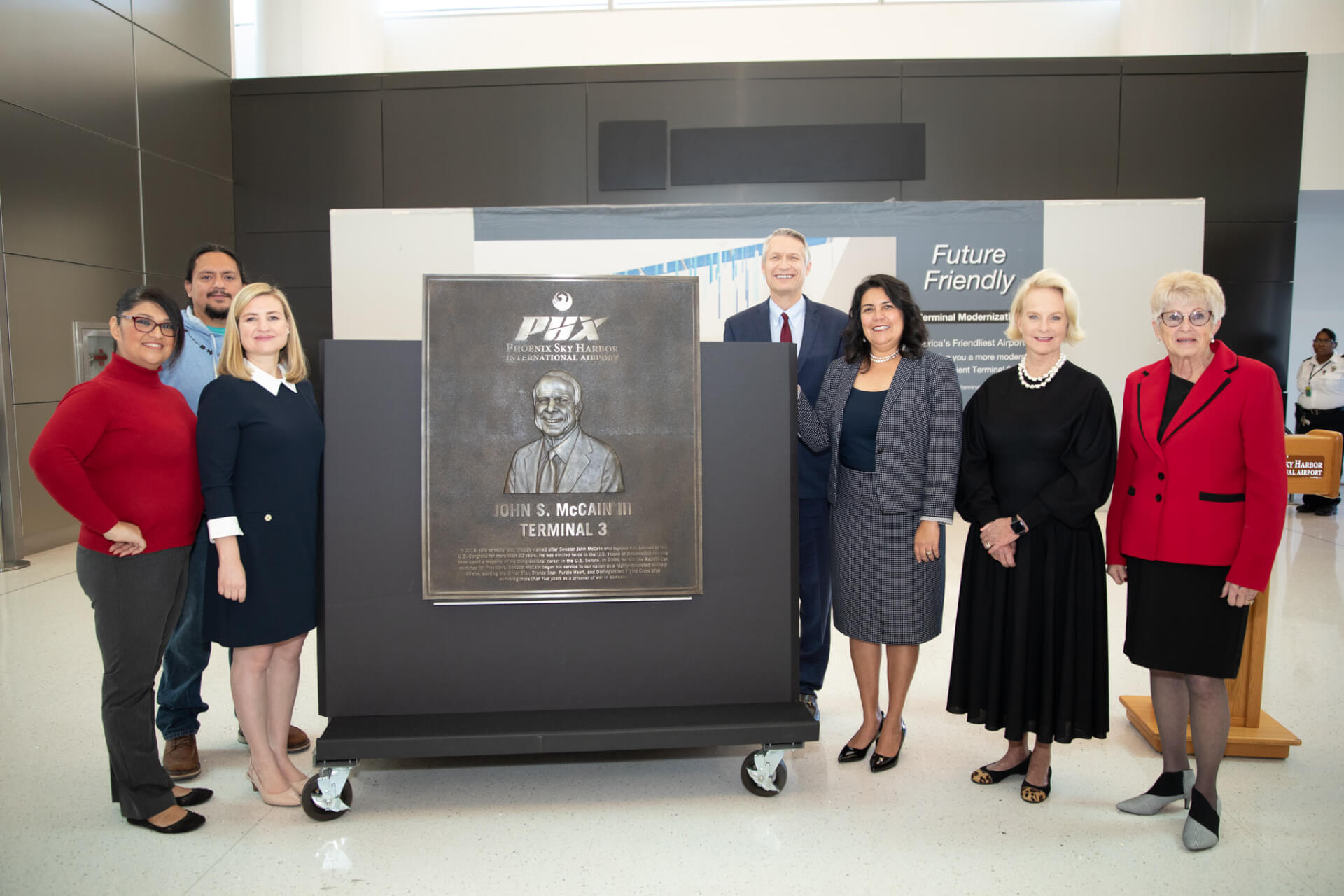 In 2017, Phoenix City Council voted to name Terminal 3 the John S. McCain III Terminal 3. The Terminal, which originally opened in 1979, has undergone an extensive modernization. In early February, the final stage of the modernization will be complete when the newly renovated north concourse opens.

“This is a great day for Phoenix,” said Mayor Gallego. “We dedicated Terminal 3 to one of our nation’s greatest public servants–John McCain. We also marked the completion of a multi-year modernization project at the airport. The new concourse will be home to local restaurants, stunning art, a nursing room, and increased energy efficiency standards. This is another important investment in our state’s number one economic driver.”

Cindy McCain also attended the unveiling of her husband’s plaque, which will be permanently installed on Level 1 of the terminal bearing his name.

“Aviation was in John’s blood. The terminal that now bears his name in our state’s beloved airport is one small way that his legacy will live on in the place he called home,” she said.

The north concourse features 10 airline gates and all new shops, restaurants and customer amenities such as an animal relief area, a nursing room, a family restroom, hearing loop connectivity in the gate areas, and access to power from every seat.

New restaurants include Ajo Al’s, Scramble and The Phoenix Beer Company. These restaurants represent local favorites and will give visitors to the Airport a taste of what the area has to offer. New shops include Discover Arizona with Tech-on-the-Go/House of Marley and Stellar News + Market with Starbucks.

Like the previous two components of the Terminal 3 Modernization Program, the north concourse offers incredible views of Phoenix’s desert landscape, including Camelback Mountain, and plenty of natural light.

The north concourse will welcome the first arriving flights on February 3. The first departures from the newly renovated concourse will begin on February 4. All airlines will be relocated from Terminal 2 to Terminal 3 by February 6. With the completion of the Terminal 3 Modernization Program, Terminal 2 will close. Terminal 3 will serve Air Canada, Alaska, Boutique Air, Contour Airlines, Delta, Frontier, Hawaiian, JetBlue, Spirit, Sun Country and United.

The project, which cost $590 million was paid for through airport revenues such as parking, concessions, and tenant fees.  No local tax dollars are used.