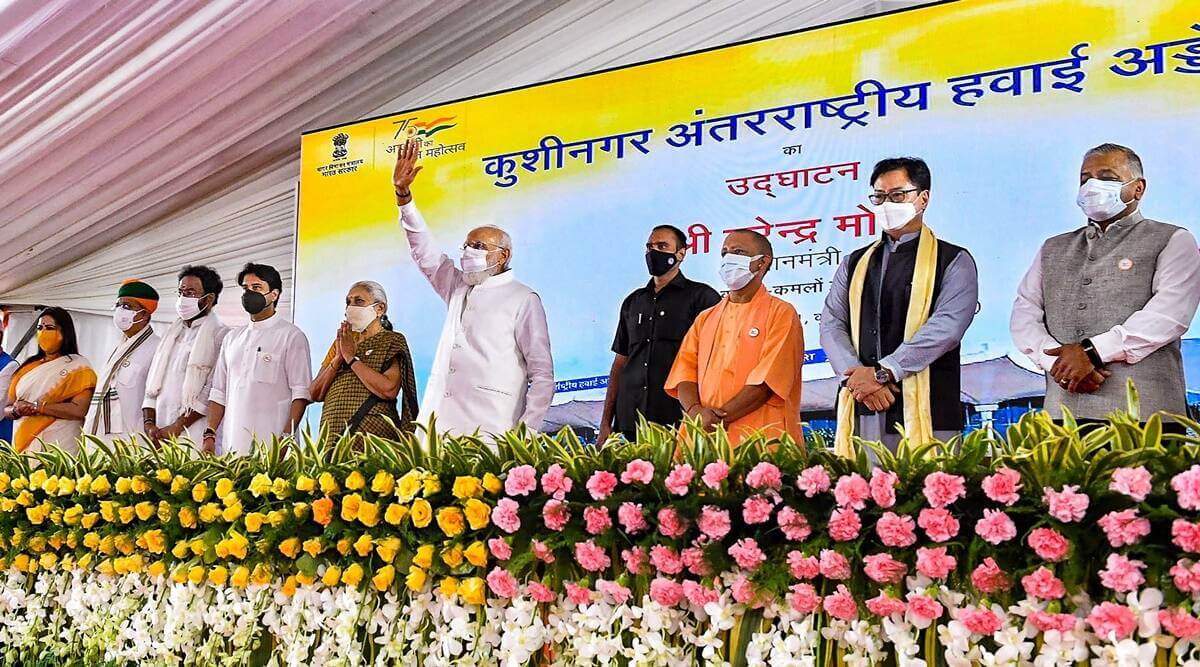 Inaugurating the third international airport of Uttar Pradesh in Kushinagar on Wednesday, Prime Minister Narendra Modi said the project is a tribute to the devotion of Buddhist society across the world. He also said completion of the project comes as fulfilment of one of his “commitments” to the region as its representative in Lok Sabha.

Modi said the airport, built at an estimated cost of Rs 260 crore, will boost economy of the region. Stating that vaccination against Covid-19 will play a significant role in the tourism sector, he said fast and wide-scale vaccination in India would develop trust among global tourists and encourage them to visit the country.

At around 9 am Wednesday, the inaugural flight — a Sri Lankan Airlines flight carrying many Buddhist monks and dignitaries from the island-nation — touched down at the airport. The monks brought with them relic from Waskaduwa Sri Subuddhi Rajvihaa Temple in Sri Lanka.

The monks from Sri Lanka were accompanied by that country’s minister Namal Rajapaksha, who is also son of the Lankan Prime Minister.

The first direct flight from the airport — to New Delhi — will start on November 26, and direct flights from Mumbai and West Bengal are scheduled from December 18, said Civil Aviation Minister Jyotiraditya Scindia, who was present on the occasion, along with UP Chief Minister Yogi Adityanath, among other leaders and dignitaries.

At the same time, he added, opening up defence airspace for civilian use is a “similar big reform”.

On the flight from Lanka, Modi said the Kushinagar airport project will connect the region associated with different phases of Lord Buddha’s life such as Kushinagar, Sarnath, Bodh Gaya and Kapilvastu to the rest of the world. He said the project will not only provide better connectivity to followers of Buddhism in India but also to those in countries such as Sri Lanka, Thailand, Singapore, Cambodia, Japan, South Korea and others.

Modi said Kushinagar airport is a “tribute to the devotion of Buddhist society around the world” and that there is special focus of the government to develop places associated with Buddha.

Stating that Kushinagar will be the ninth airport of UP, he assured that work on another international airport in the state — at Jewar, near Noida — is also going on at a fast pace, as is work on airports at Ayodhya, Aligarh, Azamgarh, Chitrakoot, Moradabad and Shravasti districts.

Referring to the recently announced drone policy, Modi said it would bring “life-changing transformation” — from agriculture and health to disaster management and defence.

Later in the day, Modi visited Mahaparinirvana Temple in Kushinagar to mark Abhidhamma day and said the delegation of monks will visit Varanasi — his Parliamentary constituency — as well. At a time the world is talking about environment conservation and climate change, and several questions are being raised, “if we adopt the message of Lord Budhha, then we will know what to do”, he said.

He said that Buddha is “viashvik” (universal) because he talked about starting from within and that “Buddhatva” of Buddha is the “sense of ultimate responsibility”. Modi said Buddha’s message “Appa Deepo Bhava” is a motivation for India to become self-reliant.

Later in the day, as Sri Lankan Cabinet Minister Namal Rajapaksha handed over the copy English Shinala and Tamil translation of Bhagwat Gita to Prime Minister Modi, he tweeted ” The greatest gift Sri Lanka received from India is Buddhism! We have always shared a close relationship between our nations & our people! It is the vision of President Gotabaya Rajapaksha & PM Narendra Modi to strengthen this bond between our nations & our people”

Meanwhile, in response, Prime Minister Modi said, “India-Sri Lanka ties are getting stronger and stronger across different sectors. This augurs well for the people of our nations.”

Referring to teachings of Sri Lankan president as his friend, Prime Minister tweeted,”The teachings of Lord Buddha unite our nations and make our planet better.”